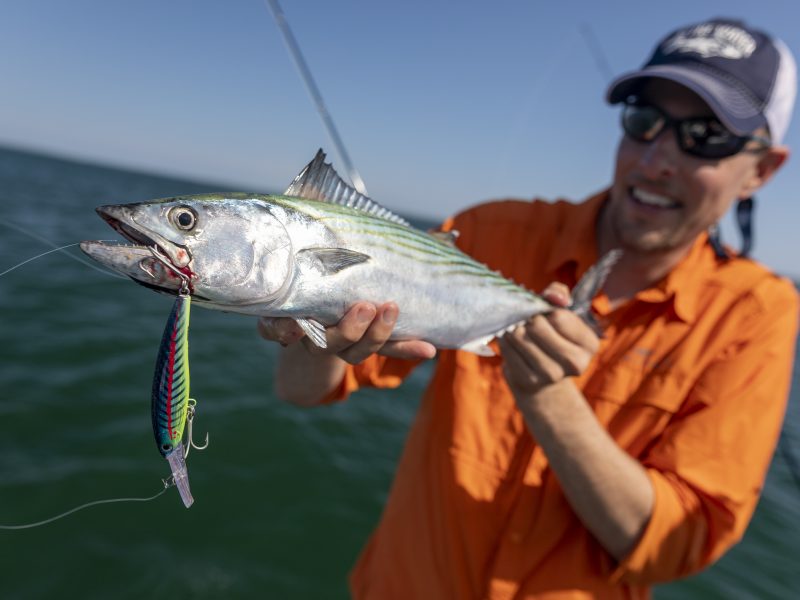 Pictured Above: This bonito was fooled by the Lime Light UV colored Rapala X-Rap Magnum.

The repurposed fluke rods thrummed with the frantically swimming minnow plugs as Anthony DeiCicchi pushed his 26 Blackwatch above 5 knots for our fourth pass over the shoal. I had a tackle tray open on my lap, debating which color deep-diver to try next, when the tip of the rod on the starboard corner wrenched down.

“It’s not a bluefish!” Anthony shouted over the motor and the singing reel as I leapt up, spilling the diving plugs all over the deck. I high-stepped through the treble-hook minefield to the rod, flicked off the clicker, and enjoyed the searing run of the first bonito of the season.

Bonito are the appetizer to the entrée that is albie season. Fishermen looking for that first taste of inshore pelagics can find it, most years, by the middle of July. By August, it’s a sure thing that the bonito have settled in.

Bonito move inshore before the smorgasbord of fall baitfish leaves the backwaters, which makes sand eels their primary summer food source. The bonito beeline for shoals, humps, and rips where sand eels are plentiful. At these locations, bonito generally feed below the surface, giving no indication of their presence. As a result, high-speed trolling is the most productive technique.

Trolling for bonito feels like a scaled-down version of tuna trolling – without the long run offshore. Most fishermen use a two- to three-rod spread with a mix of small trolling feathers, drail-and-spoon rigs, and small, deep-diving minnow plugs.

Bonito are fast—some fishermen believe they are even faster than albies—but most weigh less than 6 pounds, so to fully enjoy the fight, most fishermen use the lightest tackle they have that can handle high-speed trolling. 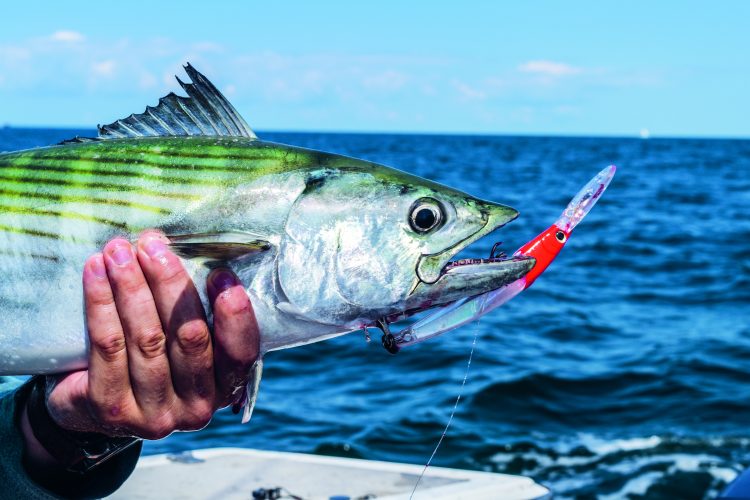 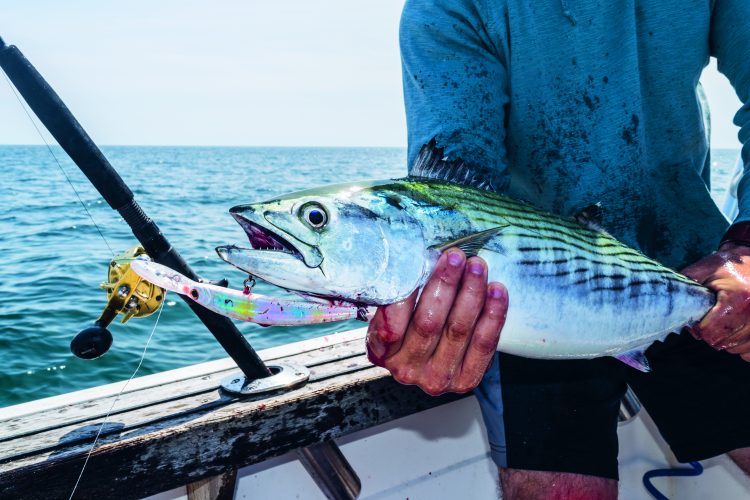 Rods and Reels for Bonito Trolling

Generally, the rod should be able to handle 30-pound-test braided line and weights up to 4 ounces. Captain Kurt Freund, of Fishsticks Charters out of Martha’s Vineyard, said he likes reels that have both a level-wind and a lever drag. The level-wind allows his clients to fight fish without worrying about laying the line evenly, while the lever drag allows him to easily adjust the drag from its looser trolling setting to the tighter fish-fighting setting.

Freund spools his reels with 20-pound-test monofilament. The stretch and forgiveness of mono cushions the savage strike of a turning-and-burning bonito. For a leader, he bumps up to 40-pound-test fluorocarbon, which gives him a little insurance when leadering a fish next to the boat.

Another piece of tiny trolling gear that Freund uses is a set of out-rodders to put more distance between his lures as he trolls.

Freund trolls a two-rod spread that, 90 percent of the time, consists of two minnow plugs like the Yo-Zuri Crystal Minnow Deep Diver. When starting out in the morning, he fishes two different colors, one natural and one “wacky.” His go-to natural pattern is a green-over-silver pattern that mimics the sand eels prevalent on the Hooter, Hedge Fence, and other shoals off the south side of Cape Cod. For the bright, eye-catching color, he likes white over pink and fire tiger.

For speed, Freund doesn’t troll much faster than he does for bluefish, around four knots. “If I want to bump it up, I may go as fast as five knots,” Freund says. That’s the speed where the plugs swim best, he explains. Dealing with small bluefish is part of the game. 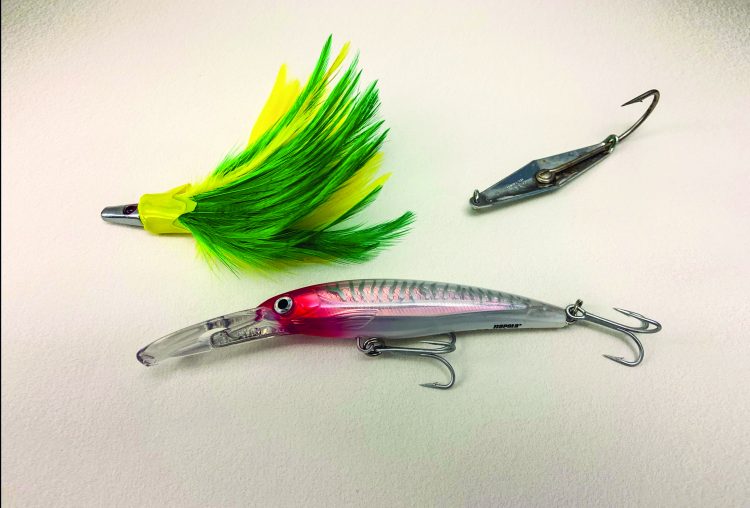 C&H No Alibi Trolling Feathers (left)
The 1/4- to 1-ounce No Alibi feathers have a tantalizing pulsating action on the troll that makes them a top pick for bonito, mahi, and small bluefin. Unweighted, they’ll swim just under the surface at speed, so fishermen rig them behind a drail or size 00 planer to get them down.

Rapala X-Rap Magnum 10 (middle)
The frantic action and eye-catching finish on the smallest size X-Rap Magnum has made for high-speed inshore trolling. The lure dives up to 10 feet deep and can handle trolling speeds up to 13 knots.

Original Clark Spoon (right)
A classic high-speed trolling lure, the Clark Spoon wildly kicks and flashes, calling in bonito and other pelagics from a distance.

You won’t find a boat heading out for bonito without a box of Clark Spoons and an assortment of drails or planers. A Clark Spoon is a simple metal spoon folded in a diamond shape around a hook. In the water, it kicks wildly, flashing in all directions.

These lures have little weight, so they need some assistance in getting down to the fish. Most fishermen use 2- to 8-ounce trolling drails, though some use small planers like the size 1 Sea Striker Planer, which gets the spoon 5 to 10 feet down.

Small trolling feathers are another effective bonito lure—and one that’s likely to attract a strike from other summertime visitors such as small bluefin or mahi. Feathers can be trolled just under the surface, but work best for bonito if sent below the surface with a drail or planer.

I can attest that Clark Spoons and feathers work on New England bonito just as well as they do on Jersey bones. Chris Megan and I spent an August morning trolling Clark Spoons at the Hooter, a popular bonito south of Martha’s Vineyard, and not only did we catch bonito, but we also nabbed a few large albies up to 15 pounds.

Toward the end of summer, when peanut bunker begin sneaking out of the bays but before false albacore move in, bonito push closer to shore to feast. You’ll spot these green-backed missiles launching into the air and slashing through the peanut schools.

Bonito strike many of the same baits as false albacore, but seem to prefer a slightly slower retrieve. When they are on peanuts, however, the ¾-ounce Crippled Herring is tough to beat.

If you can get within range, small soft plastics like the Albie Snax or 4-inch Ron-Z work very well on bonito. Work the baits at a moderate pace, trying to keep them near the surface. White and silver are all you need for colors.

A 7- to 7½-foot spinning rod rated for ½- to 1-ounce lures with matching reel and 20-pound-test braided line will provide the maximum casting distance with the smaller bonito lures. For leader, a 24-inch length of 12- to 20-pound-test fluorocarbon is plenty. While bonito on offshore shoals aren’t too line-shy, when they move inshore, they can be very picky at times. 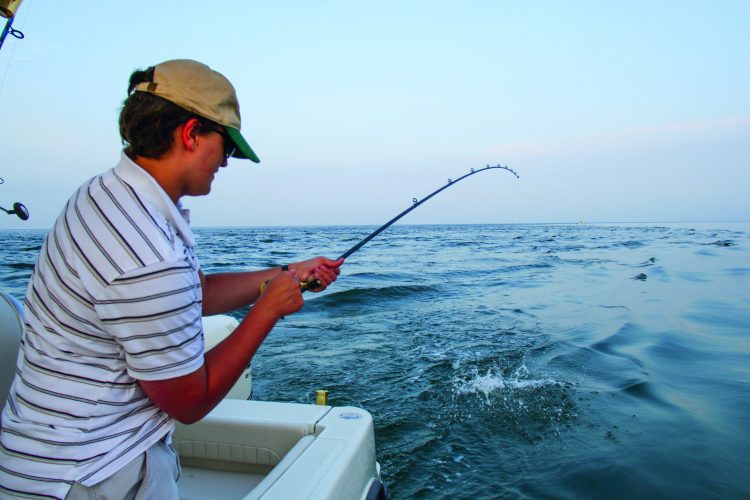 The shoals that attract bonito are also the summer homes for massive schools of 2- to 8-pound bluefish. The blues can be so thick, and so ravenous, that getting through to the bonito often feels like an impossibility. This prompts many captains to try to “outrun” the blues by pushing the throttle past 6 knots. These speeds will reduce (but not eliminate) bites from bluefish, and will leave your lures open long enough to attract a bonito.

Back to my trip with Anthony … When my bonito circled into range, Anthony scooped it with the net, and visions of seared bonito steaks danced in our heads.

Bonito, unlike albies, are celebrated for their culinary qualities. The meat is soft, but takes well to grilling, provided it’s well cared for at the time of capture. While it was tempting to toss the fish on the deck and reset the lines, now that we’d located our target species (because we wanted to eat well that night), we took a few minutes to prepare our catch. With the fish still kicking, I used my index finger to pop a coupe of its gills and promptly placed it headfirst in a bucket of seawater to bleed out.

Meanwhile, Anthony used another bucket to scoop more seawater that he added to the cooler we’d packed with ice before the trip. After letting it bleed out for a couple minutes, I transferred the fish to the ice slurry that would help the meat cool off and firm up. He wasn’t alone in there for long. We hooked up again on the next pass and the pass after that. Bonito season was in full swing.

In 2018, massive numbers of juvenile bonito, 6 to 10 inches in length, were reported as far north as Maine. Fishermen enjoyed catching baby bones on ultralight and fly tackle into October, and while all hoped they would return in similar numbers this season, many wrote it off as an anomaly.

Most years, bonito makes their presence known in the Northeast’s inshore waters in July. This year, however, bonito were reported in New Jersey, New York, Rhode Island, and Cape Cod by mid-June, in water believed to be much too cold for them. It’s reason enough to be optimistic that the big schools of baby bonito will be back, and a little larger this summer, providing fun light-tackle fishing right through the doldrums.

“I had a trout fisherman from Colorado on board, his first day fishing saltwater,” said Captain Kurt Freund. “It was a perfect day, and we’d already caught a few bonito, when we hooked up again. I saw my client cranking away, so I stayed at the helm, waiting for him to tell me when the fish was close.”

A long time passed, so Kurt went to see what was going on. His client was still reeling as fast as he could, but the spool was spinning the other way and it was running out of line!

Freund spun the boat, and chased the fish to put some line back on the reel. “I caught a glimpse of the fish, with its dark, purplish sides, and I said to my client, ‘Dude, settle in. It’s going to be a long fight.’”

It’s not uncommon for “baby” bluefin tuna to show up on the bonito grounds in late summer. The same sand eels that attract bonito also bring in bluefin from 10 to 50 pounds. The tuna will strike many of the same lures as bonito, and they especially like small trolling feathers.

“I coached the guy through the fight, but just as the fish was getting into gaff range, he shut down.”

Freund told his client to dig deep and bring the circling tuna the last five feet. He did, and Freund sank the gaff, then hauled the tuna aboard. Freund yelled with joy, but when he turned to high-five his client, he saw him sprawled in the front of the boat, exhausted and a little seasick.

“He said he’d had enough,” Freund said, “so we left these perfect conditions and hungry fish.” Following the surprise bout with a bluefin on light tackle, that client was probably more than ready to return to Colorado and his trout.

Check out this Albie & Bonito episode of On The Water’s Angling Adventures to see sizzling drags and big time blitzes.