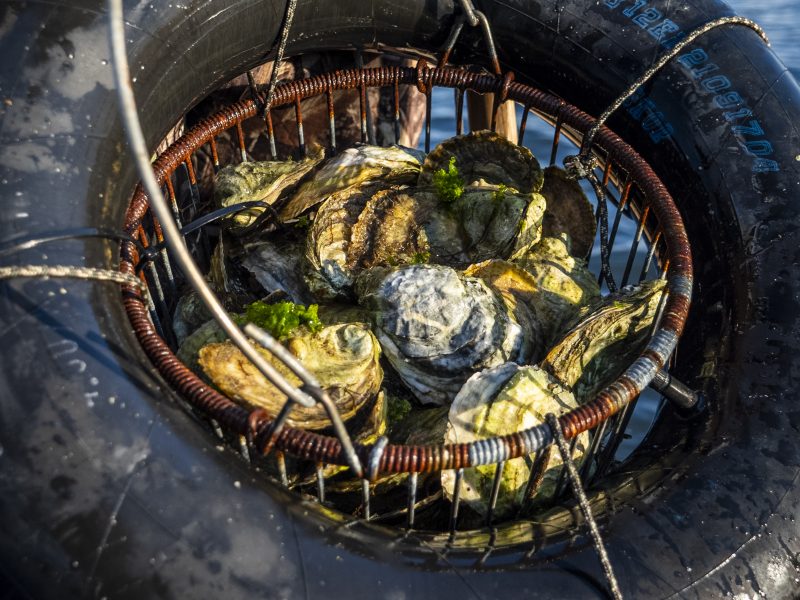 When I began shellfishing in the mid-90s, there were enough wild oysters around for a decent harvest, but a few years later, the Northeast was hit with the perfect storm for the destruction of our oyster beds. A severe case of the fatal Dermo virus took hold of the oyster stocks, and then two severely cold winters in a row took a major toll on the last survivors. Many bays froze over, killing the oysters in shallow water, which is where most of them live. To make matters worse, there was also an outburst of oyster drills, where whelks survive by drilling holes through oysters’ shells and eating them alive. Our oyster beds were decimated.

By the year 2000, the stocks were at an all-time low. If you were lucky, you might find four or five legal living oysters on a tide. In many areas, the oyster population was on the brink of collapse. Happily, around that time, researchers at Rutgers University developed a strain of oysters resilient to viruses. It was a major breakthrough and spawned a burgeoning aquaculture industry. Oyster farms began popping up like mushrooms, and farmers made great strides in fine-tuning their craft.

Aside from being delicious, oysters have a remarkable ability to remove nitrogen from water as they filter-feed—this is a heroic feat since excessive nitrogen triggers algal blooms that deplete the water’s oxygen and create dead zones. Many towns and municipalities use oysters to clean up local harbors and bays. Using the same techniques as oyster farms, some towns are now growing oysters by the millions to help clean the water, and then allowing harvest by both recreational and commercial fishermen.

Where I live in Falmouth, Massachusetts, gathering a peck of oysters now takes less than 20 minutes. For those who don’t know, a peck is 85 oysters, and a bushel is roughly 340.

The propagated areas are so fertile that a single sweep of a clam rake can produce over a dozen legal-sized oysters, and things should only get better. The transplanted oysters are reproducing naturally in their newfound homes, and I hope we may once again see wild oyster beds flourish.

How to Collect Oysters

Collecting oysters is not difficult, as long as you are in the right spot. Since oysters live on top of the seafloor in shallow water, they are easy to see. I use the same rake that I use for quahogs, and simply drag it across the bottom.

The hardest part is prying the oysters from whatever they are attached to. I also take the time to clean them up and remove any barnacles or limpets that are clinging to their shells.

Oysters must be 3 inches in length to legally harvest, and there is a bag limit. Their shells can be razor-sharp, so wear a pair of gloves while both harvesting and shucking. You should also check for small seed oysters that may be attached to adult oysters. By law, you are to dislodge any seeds that might be growing on your quarry.

Eating oysters raw, while they are still alive, is a primal act. It’s food in its purest form. During oyster season, I eat at least four or five raw oysters every day. “Come and get your daily oysters!” is a common phrase yelled out nightly in my household. A crack of black pepper, a small dash of cocktail sauce, slurp it down – so good! And a fried oyster Po’ Boy sandwich is one of the tastiest things in the world.

Are you looking for oyster recipes? Check out our Oyster Stew, Oysters Rockefeller, and Dave’s Oyster Delights.

Tip: Prior to shucking, place your oysters in the freezer for 15 to 20 minutes. This will shock their abductor muscles and make them much easier to open.