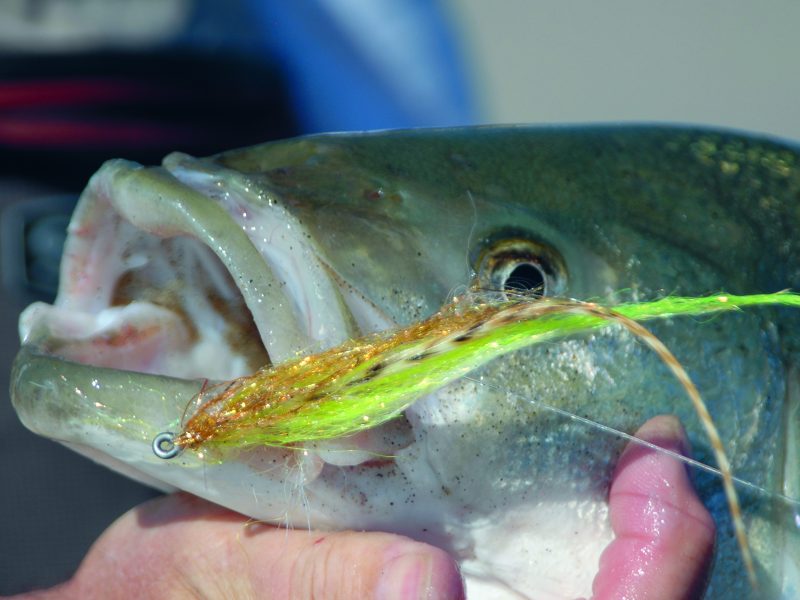 Fly casting to breaks in the sandbars can be exceptionally good in the fall.

Find the structure breaks along the beaches and you’ll stay in the fly fishing game through the frosty mornings of November and December until the last page of the 2021 season is finally written. Hewn by weather changes, perhaps a Nor’easter or two, the contour of summer’s beaches get upgraded with a lot more fish-holding structure that are great places to find striped bass, and maybe some bluefish too.

Wave action and wind direction alter the sandy structure, forming more pronounced sandbars, holes, points, rip lines, and currents. As they become more visible, they are easier to fish. Some of the best surf fly-fishing opportunities occur where there’s a break or opening in a sand bar that causes enhanced water flow as waves crash through, recede, then repeat themselves.

A typical fall beach is not completely straight; instead, it develops a scalloped appearance with points poking out into the ocean and deeper water in between the points. Sandbars form offshore from those points and holes, running parallel to the beach. Breaks in the bars usually happen midway between two points as the deeper water in the hole tries to push back out through the bar. These breaks, often called cuts, slots, necks, or gaps by some flyrodders, are great places for bass and bluefish to hang around as the rushing water pulls and pushes bait back and forth through the openings. The combination of pushing water action, currents (rips) that form at the breaks, and the nearby beach structure all work together to hold bait and bass.

Many variables affect the shape of a beach. The profile may be a gentle slope or a dramatic drop-off, the shape of the nearby points may be short or long, and the in-between holes can be very deep or only slightly deeper than the points to either side. Even the sandbars vary in depth and shape. The bar may have steep or shallow sides, or it can be deep on the inside and shallow on the outside. The shape of the structure may frequently change, sometimes every few days, as wind and wave size continually alter it. This is especially true of east or south beaches that face directly toward the ocean, and at times when offshore winds create huge swells that erode the original structure but replace it with new.

Every beach has a shore current that flows parallel to the beach and inside the sand bar. It may be pushed by the wind, such as when a southeast wind pushes the beach current. It may be driven partly by the flow of water as the waves recede from the beach into and out from the break in the bar; the currents washing along the sides of a point also play a role. Their mixture sets up vital feeding stations. Before making the first cast, it’s a good idea to watch the beach for a few moments to determine the flow of the currents and location of the breaks along the structure. Keep in mind that a rip current is usually more visible at low tide, and not so visible at high tide.

Years ago, Ray Bondorew of the Rhody Flyrodders gave an in-depth presentation about fly-casting in the surf during the fall to the members of the Atlantic Salt Water Flyrodders and talked about how current flows along beaches. “Think of currents as small rivers running through the surf,” he advised, “and that’s the way to fish them – just like you were on a river or stream. I cast to the side that the current is running toward so I get the best drift for the fly, and if I get slack, I mend the line as needed to keep tight to the fly.”

Despite the ever-changing nature of beaches and their current flows, there are several basic places to cast your fly. The accompanying illustration of a hypothetical beach shows current flow along the shore and current flow over and through sand bars and the break. These are all good places to cast, but keep in mind that the fish are static– they do move. Although the break can sometimes be a fish hotel, with bass seemingly stacked up and ready to bite, as the tide ebbs and flows, all these spots will have (or lose) fish. While casting to the break is an obvious strategy, throwing flies to all the structure and currents is a better approach.

Before making long casts to the bar and the break, it can pay off to make the first few casts close in the wash to take advantage of the shore current flowing parallel to the beach and in the trough inside the sand bar. Mullet and small bunker are often right in the wash, with striped bass and bluefish following closely. The first few casts can be short, maybe 40 feet or less, and a retrieve that lets the fly swing in the current can be very effective.

After working the fly in close, extend the casting distance by about 10 feet and work the water again, finally reaching out to whatever distance you can comfortably cast, maybe 70 to 80 feet. Too much distance in the surf can be harmful because the water’s natural movement puts subtle bends in the line, meaning it’s not perfectly straight to the fish, which can cause missed bites and loss of the feel to the fly. Sometimes, medium casts of about 60 feet are better and more effective rather than casts meant to reach to Portugal.

If the bass are feeding in the wash or trough, a short cast at 45 degrees to the beach can also be very productive because it allows the fly presentation to stay in the feeding zone for a significantly longer time (unless wave action and wind prevent a suitable retrieve). During one particular sunrise in Bay Head, New Jersey, bass were slashing bait about 15 feet outside the wash and my short casts on an angle got plenty of bites. The trick was that I cast at an angle in the same direction as the shore flow, made a few strips until the water tumbled the fly and line, then I lifted and made another cast.

Some beaches form holes between the points and can be relatively shallow or quite deep on the inshore side of the break, with mixed currents as the waves move through and then recede through the break. What may look like confusing rips and churning water is an ideal feeding station that can be counted on to hold fish. In particular, water pushed through a cut often creates some amazing circular currents as the water moves toward the beach. Some of the water will push to the left, some to the right, so it’s important to note if one side is stronger than the other. One fall, I had the chance to fish a late afternoon at Delaware’s Cape Henlopen State Park and encountered whirlpool-like circular currents at several breaks near the tip of its sandy beach. The fish bites were all on the downward direction of the current flow as 5-pound blues plundered mullet for about an hour until low tide finally took all the water out of the hole.

If the trough and shore current fail to deliver a bite, extend the next few casts to get the fly into the rip at the mouth of the break itself. Work all the water by making casts to the right, the left, and into the center. With each wave, the water flow through the gap will pass through the break and toward the beach, then recede back out through the break. You can work the fly by typical single- or two-hand stripping, or if there’s a good pull from the outgoing water flow, feed line into the current while allowing the fly to be pulled offshore into the roiled water outside the break. Experienced surf fly casters call this type of productive spot “the fan” or “the head,” and on a falling tide, it can be the ultimate place to drop the fly.

Waves of the incoming surf have a rhythm and many fly guys take advantage of the seventh (or sometimes the sixth or eighth) wave theory. After several waves, there is a pause and a momentary short period where the surf is calm before the next set of incoming waves begins the journey to the beach. Getting the fly into this foamy water can be exceptionally productive and you can work the fly until the next wave forms and really pulls on the line. Lift to make the backcast and lay the next forward cast behind the new wave into the quiet water.

I recall one memorable daybreak morning at Rhode Island’s Point Judith Light when working the quiet water on the backside of incoming waves was exceptionally deadly on a mixed bag of blues and bass – not big fish, but nice 5- to 10-pounders. The tide was just starting to fall, the surf was pretty calm with 2-foot rolling waves, and it seemed like every time my fly laid into the quiet water behind a cresting wave, a fish grabbed it.

There are plenty of great surf days to look forward to as the 2021 season inches toward winter, so stay tight to good fly fishing wherever you find a break in the sandbars. The bass will be waiting.

Tackle discussions for fall surf fly fishing generally favor a 9-weight like a TFO Axiom-II as the optimum all-round surf fly rod. The best ones have a good measure of pulling power just above the grip to slide a bass the last few feet up onto the sand. In today’s world of fly rod design, however, there are many 8-weight rods that are pretty close to a 9-weight in how they cast and handle surf caught fish, like the Scott Tidal 8-weight that casts great and puts lots of pressure on the fish.

If your arm gets tired after a long session of casting a 9- or 8-weight, check out TFO’s Axiom-II 7-weight. It’s got a lot of fish-fighting power and is a very pleasant rod to cast in light surf. Typical beach bass in late fall are generally schoolie size to maybe 12 pounds or so, and can be handily taken on a 7- or 8-weight unless you’re in some really heavy surf.

Probably more important than the rod is the choice of line. A full floating line can have its day in the sun when it works perfectly, but intermediate and full-sink or sink-tip lines are often better choices. When Rick Ferrin fishes Long Island’s South Shore and Connecticut’s deep water and holes, he notes, “To fish the deeper cuts or where surf currents are powerful, I use either a Cortland Compact Intermediate or their Compact Sink Type 3 in 275 or 350 grains.

Both have a ‘step’ section just behind the head at the transition to the running line and are quite comfortable to cast. Going deep keeps the fly in the feeding zone and I seem to stay in better contact with it.” Sink lines are also great when sand eels are the primary bait because the fly can be worked just off the sand.