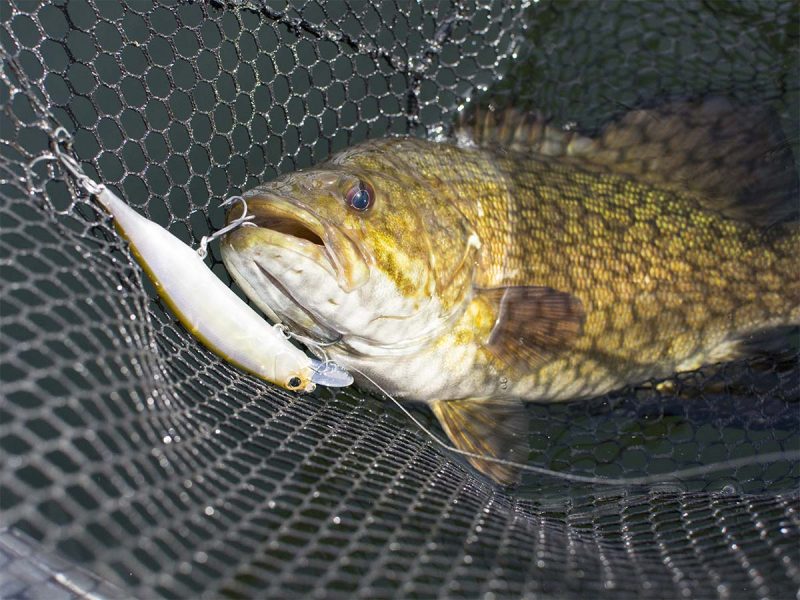 These versatile lures catch fish from spring to ice-up and in a range of bass habitats. Learn how to fish jerkbaits, and you’ll be well equipped for freshwater bass fishing year round.

How to Fish a Jerkbait

A jerkbait is a minnow-shaped lure that provides a horizontal presentation. A straight retrieve makes a jerkbait swim with a shimmying action. This catches fish, but where a jerk-bait shines is on a snap-pause retrieve, which gives it an erratic, darting action that drives bass wild.

There’s more than one way to fish a jerkbait. Some prefer more of a sideways, rather than a downward, snapping retrieve. Mixing up your retrieve mechanics can also prevent arm fatigue. When trying different retrieves, first make a short cast and watch the lure to ensure it has a good action.

Tweaking your retrieve style and cadence is also a good tactic when fishing differ-ent models, such as shallow-, mid-, or deep-diving jerkbaits. It’s a fact not lost on Jeff Gustafson, who gives the example of the deep-diving Jackall DD Squirrel. “Instead of us-ing the typical twitch-twitch-pause retrieve, change it to a pull-pull-pause routine for this bait,” Gustafson said. “You don’t want to rip it as much as pull it. It’s a subtler bait.”

Experiment with how fast and far you move a jerkbait, along with how long it’s paused, to match fish mood and activity level. Generally, the warmer the water, the faster the retrieve, the more aggressive the snap, and the shorter the pause. This triggers reaction strikes. Generally, it’s best to slow down in cold water. Assertive snaps can be productive, but extend the pause.

“I’m a mainstream jerk-jerk-pause kind of guy. I start with that, and if it doesn’t work, I’ll start creating different cadences,” said Stephen Browning. “You have to let the day tell you what the cadence of your retrieve should be. On cloudy or sunny and windy days, you can get away with a pause not being as long. When there’s not a lot of wind, I like to let it sit longer.”
The headline here is to not get stuck in a rut. Start with a retrieve cadence that has proven successful in the past, but be ready to change until bass start biting.

Milk It in the Strike Zone

Jerkbait guru Mike McClelland uses the term “milk it” to describe when he slows a jerkbait retrieve and extends the pause. It’s a strategy he uses when fishing a suspending Spro McStick 110 for pre-spawn bass that aren’t feeding aggressively and are hanging in 8 to 12 feet of water. When fish are in 12 to 18 feet, he’ll use the deeper-diving McRip 85.

“I don’t milk a bait all the way back to the boat in every situation,” McClelland said, going on to explain that the goal is to stall a bait in the strike zone to trigger a bite, but to keep covering ground by working it faster through less productive patches of water. Exam-ples of “milking water” include visible targets, such as a standing tree, as well as balls of bait and fish he’s marked by scanning around the boat using Garmin’s Panoptix LiveScope.

“As the water warms, I speed up the cadence as whole, but when I get into strike zone, I still let the bait pause, probably more than the average angler,” McClelland said.

Where to Fish Jerkbaits 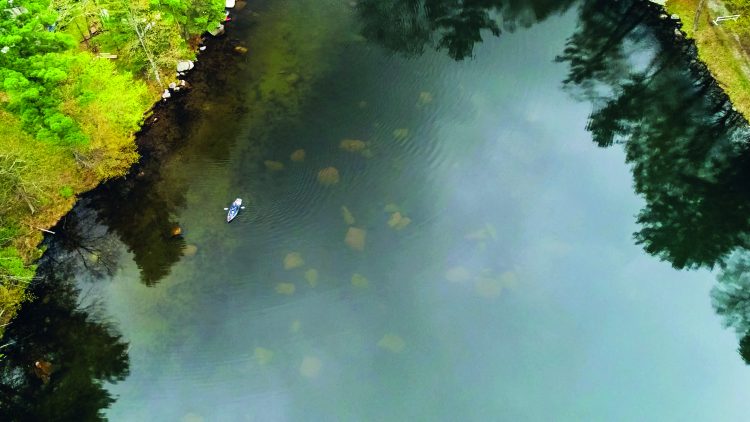 Generally, jerkbaits perform best in clear to semi-clear water. Bass visibility is always a consideration when Gustafson chooses a lure.

“The Jackall Rerange jerkbait is a shallower-running bait that I’m a big fan of using in darker water or windy conditions because it has a very aggressive action and makes more noise than traditional jerkbaits,” Gustafson said. “In clear, deeper water, when I want a jerkbait that gets down a little deeper, I like the Jackall DD Squirrel.”

Typically, 3-, 4-, and 5-inch jerkbaits are best for bass. That said, trophy bass will smash pike and muskie jerkbaits, so don’t be afraid to experiment with longer baits.

A jerkbait should swim over fish, not below them. To target fish at different depths during the season, carry shallow (0 to 3 feet), mid-depth (4 to 7 feet), and deep-diving (7 feet or more) jerkbaits.

Floating models are useful when working shallow cover. Pause, let the bait rise, then swim it over the object. Retrieve a floating jerkbait just beneath the surface with a snap-pause-float to create ripples and mimic a struggling minnow.
Suspending models maintain their depth when paused, but they’re not motionless. A quality jerkbait will rock, tip, or roll on the pause. These micro-moves captivate bass and stimulate hits.

Sinking jerkbaits can be counted down to probe deep water. When paused, a sink-ing model portrays a dying baitfish, a sight few bass can resist.

Many jerkbaits today are made of durable plastic, which lets manufacturers be creative with profiles and features like rattles and weight-transfer systems for ultra-long casts.

For example, the Rapala RipStop has a small boot-tail that gives it an incredibly fast, hard-stopping action, before it barely lifts its head and begins a painfully slow rise.

Balsa wood models have not gone the way of the dodo bird, though. Many pros are fanati-cal about wood minnow baits. Wood’s irregular grain can create a one-of-a-kind action in a lure.

Rattling jerkbaits are good for covering water and attracting bass; sound can also trigger strikes. For inactive or pressured fish that have seen dozens of rattling jerkbaits, a silent model can be a better option. It pays to own both varieties.

Natural patterns like shad, shiner, and perch are excellent choices. Anglers should also have some gaudy patterns like clown or chartreuse-heavy baits in their collection. At times, these hot paint jobs will rile-up bass. 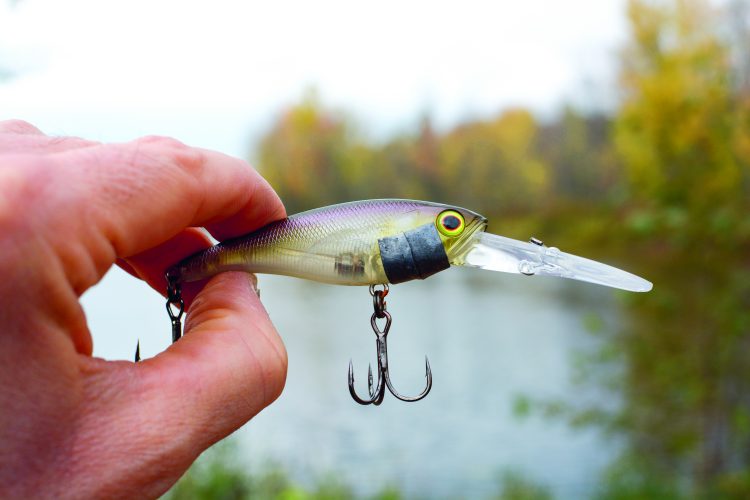 Adjust a bait’s buoyancy by adding stick-on weighted lead dots or strips to its belly or lip.

Browning uses lead strips so the jerkbait falls slowly. “I think that bait sinking at a slow rate of speed with a little quiver as it goes down is a key component of getting fish to react when you’re pausing it,” Browning said.

Your choice of line influences a jerkbait’s performance.

Medium-power rods in the 6’6” to 7’ range are popular. These lengths let most anglers use downward rod snaps without the tips touching the water. A fast- or extra-fast-action is key. The blank must be responsive enough to transmit jerks, but provide adequate cushion so hooks stay buried during the fight. 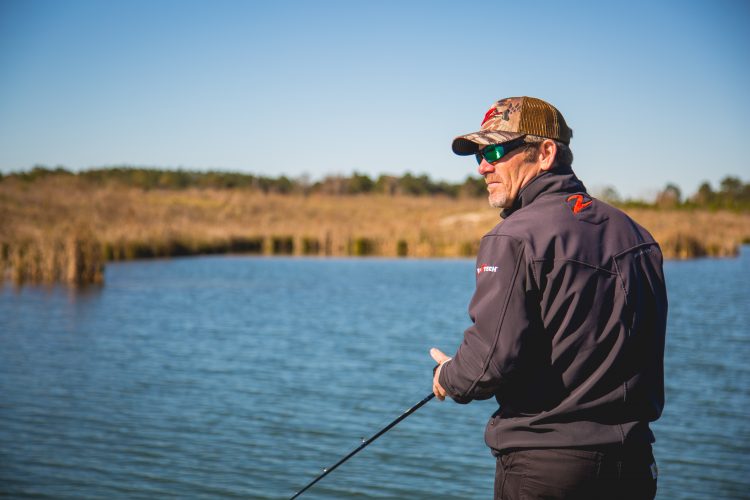 “The biggest mistake I see a lot of anglers make when jerkbait fishing is they don’t pay attention to the line,” Browning said. “When you’re jerking it, the key is to jerk it on a slack line…. you really don’t feel the bait until you get to the second half of the jerk. The first half is picking up slack line; the second half is when you really snap the bait. When pausing it, the line might move just a little bit, and it doesn’t take a fish much to grab it. A lot of times it’s a slight tick of the line, so if you’re not zoned in on it, you’ll miss that bite.” – Stephen Browning

This article was originally published online in April 2019.

Largemouth Bass by the Calendar