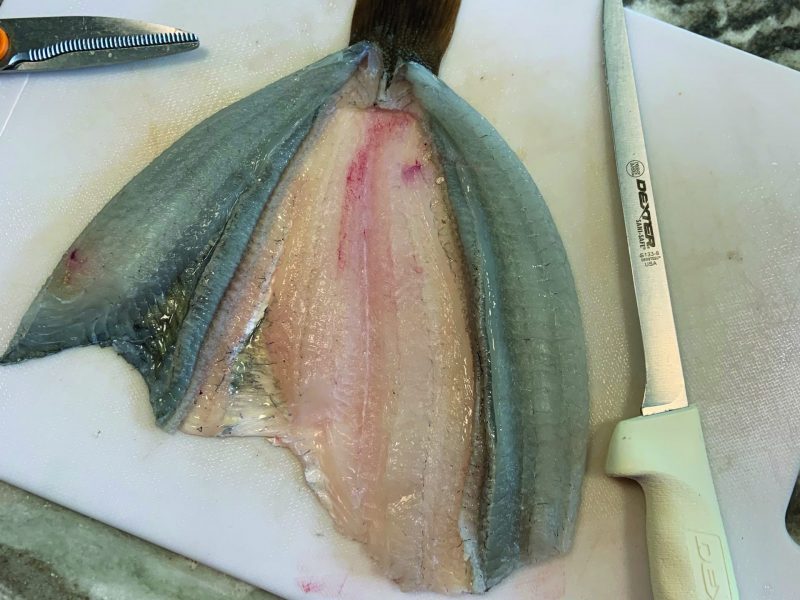 The winter flounder was the fish that started my obsession with saltwater fishing. When I was a kid in the late 70s, flounder stocks were at their peak, and it seemed that the ocean floor was paved with them.

I fondly recall catching these fish by the bucketful on my father’s old Chris Craft ski boat. All you needed to do was steam about 1/4 mile out of the harbor, drop down a worm and, within seconds, a flounder was flopping around on the deck of the boat. At the time, it seemed there was an inexhaustible supply but, sadly, that wasn’t the case.

By the time I went off to college, the population had all but collapsed. It was about the same time that striped bass made a revival, so I don’t know if there was a correlation, but for whatever reason, it would be another 20 years before I laid eyes on another winter flounder.

However, in the past 10 years, there has been a glimmer of hope for their recovery. Boston Harbor once again has a robust fishery, and both New York and New Jersey have been producing more flatties, although the populations there remain a shadow of what they once were. In the past 4 or 5 years, winter flounder have once again become a viable target in Cape Cod Bay, the same place I caught them as a kid.

Catching a winter flounder in my old stomping grounds has ranked high on my bucket list the past few seasons, but it wasn’t until mid-May of this year that I finally got reunited with my old (fish) friends.

Bad Dog Sportfishing, a charter boat out of Sesuit Harbor on the north side of Cape Cod, was among one of the first pioneers to rediscover the winter flounder fishery in Cape Cod Bay. For the past five years, they have been running two trips a day, almost exclusively targeting winter flounder. I was ecstatic when I got the invite to fish with them. The reports were red hot, and the fish were said to be bigger than average.

It seems rare to get a day, especially in May, when good weather, good tides, good friends, and good fishing all align, but such was the case that day. We left the dock at dawn, blessed with a glorious sunrise, gentle winds, and a bluebird sky.

And, the fishing was just as enjoyable as I remembered it. We didn’t quite catch our full boat limit, but we came very close and had a lot of fun doing so. One of the best parts, for me, was watching someone else do all the filleting.

I decided to keep two of the smaller fish whole. I have cooked a lot of fish whole in my life but had yet to try it with a flounder. Its flat shape and frying-pan size seemed perfect for this technique.

That night, I pondered my newfound predicament. I had no idea how I was going to prepare the fish, so I dug through my collection of cookbooks, where I managed to find just one recipe for cooking a whole flattie. The recipe called for “one de-boned flounder” yet there was no mention of how to perform this procedure. My curiosity was piqued, so I went to Google, which took me to YouTube, where I watched a detailed video of a man with a strange beard performing this fascinating technique.

De-boning a flounder, it turns out, is pretty easy. I gave it a go and ended up with a perfectly boneless flounder that was just begging to be stuffed.

By that point, it was getting late. I was sunburnt, tired, and not in the mood to execute the labor-intensive recipe I found in the cookbook. But then it dawned on me…the weekend prior, I had made up a large batch of stuffed quahogs and my freezer was loaded with them. Why not just pack the flounder with quahog stuffing? So, that’s what I did. It was amazing.

Caring For Your Catch

Flounder are notorious for living quite a long time out of the water. I like to bleed them by cutting the gills and placing them in a bucket of water.

This not only means a quick humane death, it also results in the fillets that are free of blood and are as white as snow.

It’s also good practice to store your catch on ice with their belly sides up (the white sides). This prevents livor mortis, which causes those unsightly red sores on the bellies of dead flounder.

How to De-Bone a Flounder

1) Gut and scale the fish, then remove the head with kitchen shears.

2) Run a knife straight down the center of the fish.

3) Follow the bones until you almost reach the fins.

4&5) Angle the knife downward to begin the second cut. Separate the second fillet from the bones.

6) Slide the knife under the bones, angle the knife slightly upward, and cut toward the spine.

7) Flip the knife, and work under the bones toward the fins. Repeat on the other side.

8) Use shears to cut around the edge of the fish.

9) Lift up the bones and cut under the spine.

10) Use shears to separate the tail from the spine. 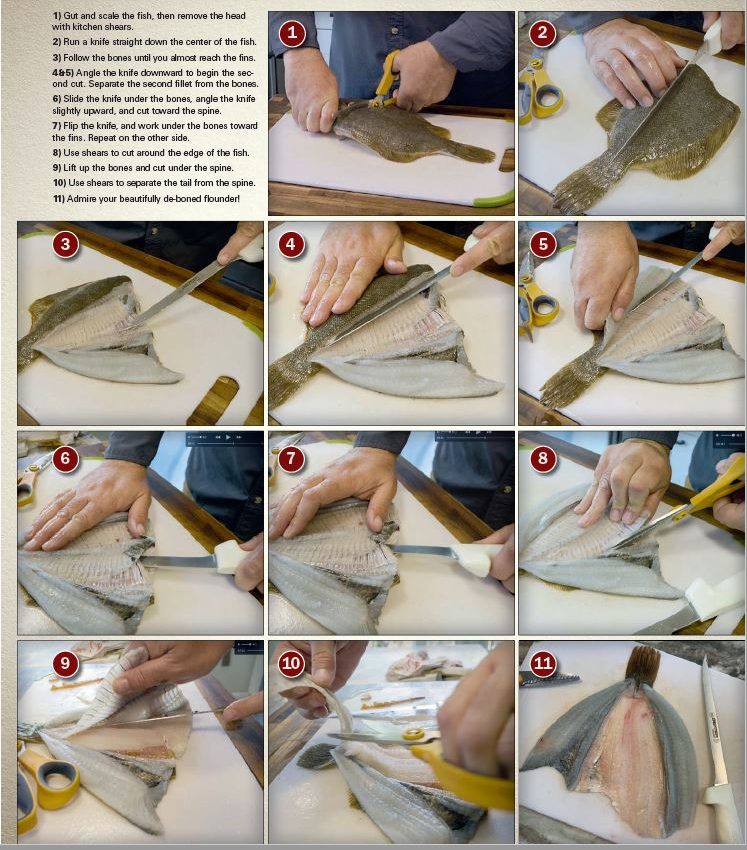 Preheat the oven to 425 degrees and roast your vegetables (see recipe below).

Scale the top side of the flounder, gut it, and remove the head. De-bone it following my detailed instructions on page 29.

Microwave the quahog stuffing until it is hot. Spread the fish out and give it a healthy dose of salt, black pepper, and harissa seasoning. Place the stuffing in the center of the fish and fold up the two top fillets, pressing firmly to pack in the stuffing. Give the whole works a good brushing with olive oil, then sprinkle on some more salt, pepper and harissa.

Set a large cast-iron skillet on medium-low heat and preheat it for 8 to 10 minutes.

Sprinkle some olive oil into the pan and then carefully slide in the fish. Cook on the stovetop for about two minutes, and then roast it in the oven at 425 degrees for about 8 to 10 minutes, or until the stuffing in the center registers around 140 degrees. To finish it off, fire up the broiler and broil until the top of the fish and the stuffing just start to brown.

Arrange the roasted vegetables around the fish in the skillet. Sprinkle on some lemon juice and hot sauce of your choice (I like Frank’s), and then garnish with parsley.

Brussel sprouts, cut in half lengthwise

Place the carrots and Brussel sprouts on a metal sheet pan, drizzle with olive oil, and give them a light dusting of salt and pepper. Roast at 425 degrees for about 25 minutes, stirring occasionally. Finish them with a light drizzle of lemon juice.

1½ cups fresh breadcrumbs made from

Thoroughly rinse the quahogs under cold water to remove any sand and grit lodged in the shells. Steam them in a large stock pot until they pop open, about 12 minutes. Move them to the sink and spray with cold water (reserve a cup of the broth). Remove all the meat from the shells and rinse again under cold water to get rid of any remaining sand, then dice them up. Set aside the shells.

Sauté the ground linguica in a large pan until it begins to brown, about 5 minutes, then remove it from the pan and set aside. Add the diced onions to the pan and cook on medium heat for about 8 minutes, then add in about a half-cup of the clam broth to help soften the onions and deglaze the pan.

Once the onions are translucent and cooked through, add in the butter, oregano, Worcestershire, and hot sauce. Next, add the linguica and minced clams, and remove the pan from the heat. Stir in the crackers, breadcrumbs, and parsley. If the mixture looks too dry, add some broth. If it’s too wet, add more breadcrumbs. Mix thoroughly, taste, and season with additional Worcestershire and/or hot sauce, if needed. (Do not add salt—the clams and broth will provide plenty.) Loosely pack this delicious stuffing into the empty quahog shells, sprinkle with paprika, and bake on a cookie sheet for about 12-15 minutes at 425 degrees.

While we’re on the topic of stuffing flounder, it seems appropriate to include one of my all-time favorite flounder recipes. I learned about this dish from Matt Ryan, who once worked as a chef for Legal Seafoods. This is a sophisticated and dazzling preparation. Do not skip the parsnip purée – it ties the dish together.

This stuffing would also work great in a whole, de-boned flounder. The apple and corn add a nice touch of sweetness, which pairs well with the delicate fish.

Preheat oven to 400 degrees. Sauté onion on medium-high heat with olive oil and butter. When onions are translucent (about 3 minutes), add apples, garlic, and corn. Sauté another 5 minutes, or until the apples start to break down a little, then deglaze the pan with white wine and add the breadcrumbs. Remove from heat and season stuffing with salt and pepper to taste.

Lay out fillets on the cutting board and season both sides with salt and pepper. With the presentation side (the white side) of the fillet down, place about ¼ cup of the stuffing on top of the fillet and roll it up. Place the rolls on a baking sheet, seam side down, drizzle with white wine and cook in the oven for 10 to 14 minutes.

Remove and serve immediately atop some parsnip purée. Enjoy!

Poach parsnips in cream on medium-low heat until tender, about 30 minutes. Purée with an immersion blender or preheat a table-top blender with hot water (pour it out before blending). Place parsnips and cream in the blender, add a pinch of salt and blend until smooth. Add salt to taste. Enjoy!