After you get your first baitcaster reel, the best thing to do is to practice in your backyard or in an open field—not on the water. The fastest way to get comfortable with your baitcaster is to focus on the reel and how it works without any distractions—like fish. For backyard casting, I prefer to use old, beat-up lures, similar to what I’ll be using on the water.

The Three Parts of Casting a Baitcaster

There are three parts to every cast with a baitcaster. To understand the angler’s role in each part of the cast, you must first understand how the cast works. Unlike a spinning reel where the bait is pulling line off the spool throughout the cast, a baitcaster, once the spool is set in motion, feeds line to the bait as it travels through the air. As wind resistance, gravity or the water slows down the bait, the spool will continue to feed line at roughly the same pace as it did at the beginning of the cast. If the angler doesn’t slow the spool as the lure is slowing, the result is the overrun of line known as a backlash.

As the bait travels through the air, wind resistance and gravity begin to slow it down. This is when the braking system comes into play.

The last part of the cast is when the bait begins to descend and eventually touch down on the water. This is when the “educated thumb” is needed.

The key to successful casting is the ability to manage these momentum changes using the adjustable components built into the baitcasting reel, as well as your own instincts and timing.

If your spool control is too loose, you will backlash early in the cast. Before you do anything else, tighten down your spool control knob all the way by turning it toward you. Now, hold your lure at just about eye level. Depress the clutch bar, and if your spool control is tightened to the maximum, your bait should dangle for a moment before beginning a slow descent to the ground. No matter how slowly the bait falls, the spool will backlash when the downward momentum of the bait has stopped, so try to thumb the spool just before the lure reaches the ground. This is active braking. Try to thumb the spool at the exact moment the downward momentum of the lure stops.

Your next step is to back off the tension on the spool control knob until the bait falls freely to the ground, but at a rate such that you can control the backlash with minimal active braking. If you have set the casting control knob too loose, it will be difficult to keep the reel from backlashing. If your spool is set too tight, you will not be able to cast for any distance, so it is important to find a middle ground.

After setting the casting control knob, you can adjust the braking system. Start by putting it on the maximum setting because this will help you develop an understanding of how the braking system affects the cast.

The braking system helps control the spool’s rotation when your lure is traveling through the air at top speed. Braking should allow your bait to travel through the air naturally while not allowing the speed of the spool to pay out more line than the lure is taking.

Set up a target in your yard, such as a bucket, about 10 to 15 feet away. Your first casts should be gentle flips, using a pendulum motion and a simple drop of the line. Remember that your braking system is set to the maximum. If you are having difficulty reaching your target, it is because your braking system is set too high and impeding the rotation of the spool, slowing the forward momentum of the lure during the second part of your cast. If you are unable to reach your target, you might be tempted to add more force to the cast, which can create tremendous forward momentum in the “early part” of your cast that your braking system fights against in the second part of your cast, causing a backlash.

Now, back down the braking, one increment at a time, to the point at which the lure travels naturally forward through the air without being impeded too much by the braking system. The objective is to find a point in which you can comfortably cast your lure decent distances with little effort. Ideally, the braking should be subtle; it should feel like the braking system is not involved, even though it is doing its job. If the braking is set correctly, backlash will not occur during the part of the cast when your lure is traveling forward or upward.

If you are having trouble with backlash after your lure lands, it is because you are thumbing the spool too late during the third part of your cast. Concentrate on the trajectory of the lure. There is a moment when the lure seems to float or stall at the highest point of its journey. At this point, feather the spool with your thumb to slow the spool as it falls toward the water.

When your lure hits the water, it is being stopped short. This interruption in momentum must also be accounted for with active braking—the spool should be eased to a stop as the bait hits the water. If you brake too fast, you will lose distance, but if you brake too late you will backlash. Remember, the forward momentum of the lure and the forward momentum of the spool must be synchronized in order to avoid backlash.

With baitcasters, the sweet spot is a moving target that will require adjustment in accordance with the weight of the bait you are using and the conditions you are facing. Each time you change the weight of your bait, start with determining a comfortable fall rate with your spool control knob and then add or remove braking to find the sweet spot when you cast. Strong winds will also affect your casting and may require you to adjust your baitcaster’s settings.

The easiest way to prevent tangles is to keep an eye on the spool. Look for any looping or irregularities in the line on the spool and correct them immediately. Make sure the line is always wound neatly and tightly. The line should be lying flat and not collecting loosely on the outside edges or middle of the spool, and there should not be any humps or bumps.

When a backlash does occur, do not panic, and do not allow frustration to get the better of you. Immobilize the spool with your thumb and pull the line forward. In most cases, the backlash will be untangled as you pull out the line.

If a tangle has occurred, the spool will be locked in place and your reel will actually resemble a bird’s nest. One of the biggest misconceptions is that the line is knotted, and once it is knotted it needs to be cut off the reel. Take solace in the fact that it is highly unlikely that a true knot has formed in your backlash. 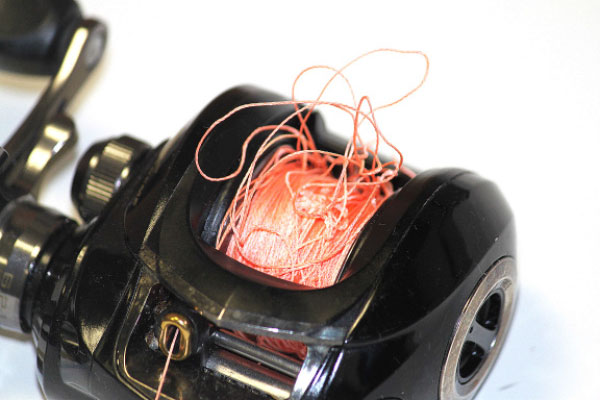 How and when the backlash occurs will tell you exactly what you are doing wrong. If it is happening early in the cast, the lure is moving too fast, and you need more tension on your spool control knob. If it is happening in the middle of the cast while the bait is traveling forward and upward, you might have to adjust the magnetic or centrifugal braking. If backlash is occurring late or just before the bait touches down, you are probably neglecting to thumb the spool in time.

Keep your thumb on the spool and slowly release line, bringing it forward until it stops and you have reached the tangle. Look at the spool and find the source of the tangle, but resist the urge to start picking at it with your fingernails or teeth.

Apply heavy pressure with your thumb on the source of the tangle. Reel in a half to full turn against the pressure of your thumb. By doing this, you are moving the spool while keeping the tangle in one place, loosening it up. After doing this once, try releasing line. You may be able to clear the tangle completely, but you may only get a foot or two before the tangle reoccurs. Repeat the process until you reach the next tangle, and keep repeating until you free the tangles and all remaining backlash. This may work after one try, or you may have to do this numerous times before you eliminate the bird’s nest.

With braided line, I have found that a gentle pinch at the tangle will sometimes help free things up, but I resist dragging giant loops of line out of the spool. Many times, tangles and looping will straighten up when the spool is immobilized and the line is pulled forward. Be gentle and deliberate in what you are doing, and finesse your way through the bird’s nest—drastic yanking and pulling will only make things worse.

Part of your baitcasting backyard casting practice sessions will inevitably require you to practice freeing a bird’s nest. This is as important a fishing skill as tying a knot or making a cast and should be practiced and mastered so that you are confident at all times when you are out there on the water.

This article was originally published online in December 2019.