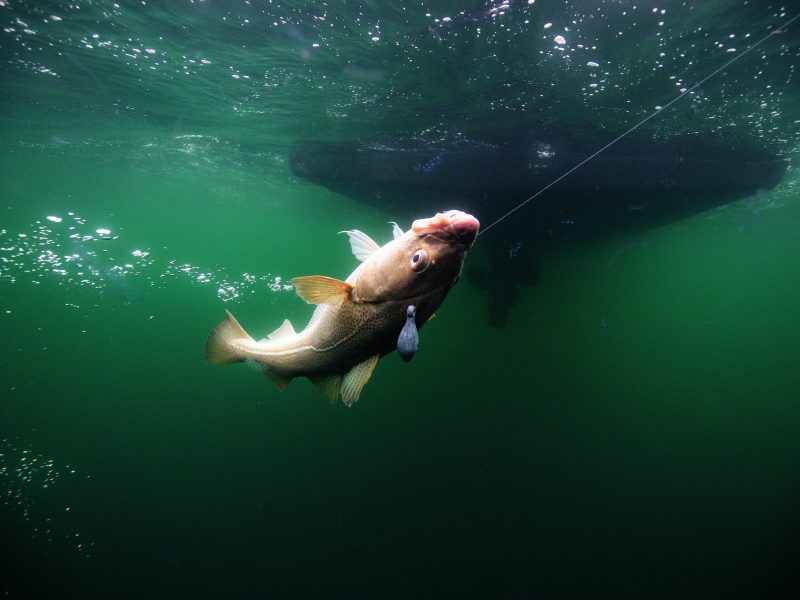 It’s a good time to be a haddock fisherman in the Gulf of Maine. The species is at historically high levels of abundance: “The bottom is paved with haddock,” I’ve heard some party- and charter-boat operators say. Anglers are heading offshore in droves to enjoy fast action and a liberal 17-inch size limit and 15-fish bag limit.

There’s just one issue. “We have a significant bycatch problem with Atlantic cod in the Gulf of Maine recreational haddock fishery,” explains Dr. Connor Capizzano, who has studied recreational post-release mortality in groundfish fisheries for the better part of the past decade. As the Gulf of Maine haddock stock has soared, the cod stock in the region has languished, with current biomass at less than 10% of the target level. This has led managers to enact strict regulations, such as this year’s two-week season in the spring and fall, each with a one-fish bag limit, for private anglers. But it’s hard to fish for haddock without catching at least some cod, and with about 15% of cod estimated to die after release (per Capizzano’s previous research), the impacts can add up. In fact, even with a complete prohibition on cod harvest in past years, annual recreational catch limits have been exceeded due to post-release mortality of accidentally caught cod.

In 2018, Capizzano and his colleagues at ACCOL and MADMF took 32 fishing trips with research vessels and the F/V Annie B, a charter boat out of Seabrook, NH. “Including industry partners, in this case Capt. Nate Ribblett of the Annie B, not only helps us find fish, but provides crucial information on study design and interpreting results,” Capizzano explains. “In short, collaborative research helps us ensure that our findings are representative of what actually happens in the fishery.”

Each angler, who represented a broad range of experience levels, used one of six different terminal-tackle configurations, rotating among them “musical-rods” style every hour. Three of these setups included natural bait (clams or squid) with a high-low rig equipped with J-hooks, offset circle hooks, or non-offset (inline) circle hooks, while three were jig-and-teaser combinations in which the jig was rigged with either a barbed treble hook, a barbed single hook, or a barbless treble hook. “We wanted to reflect the most common terminal-tackle configurations anglers use, along with a couple that are less commonly used but might have conservation benefits,” Capizzano explains.

Each angler was responsible for capturing, handling, and releasing his own fish to represent authentic scenarios. For each fish caught, a variety of variables was recorded, such as fight time, unhooking time, hooking location, fish size, amount of injury, whether there was a doubleheader, angler experience, and, of course, terminal-tackle setup.

The next step was modeling results to single out the effect of the gear types on both a) catch rate and species composition, and b) the welfare of discarded fish. “Catch rates are important because if we can maintain high catches of haddock while minimizing cod bycatch with a certain gear type, anglers are more likely to adopt it,” says Capizzano. Regarding welfare, the focus was on whether certain gear configurations increased physical injury (like gut-hooking or foul-hooking) or air exposure due to longer hook removal times, both of which can jeopardize survival for released fish.

Some Results Intuitive; Others, Not So Much

Capizzano’s army of 92 volunteer anglers caught over 6,800 fish—about 2,550 cod and 4,250 haddock— providing the research team with a rich dataset for their analysis.

Some of their findings were exactly what a seasoned groundfish angler might expect. For example, cod catch rates were higher with jigs, while haddock encounters were higher with each of the three bait configurations than with any of the jig rigs. Similarly, jigs were responsible for nearly 90% of foul-hooking and caused more severe physical injuries for both species. This was particularly true for treble-hooked jigs, regardless of whether they were barbed or barbless. Jigs rigged with either a single hook or treble hook caught cod at similar rates, but for less predatory haddock that are not as likely to try to inhale the jig (and perhaps more likely to be foul-hooked), treble hooks were more effective.

More eye-opening were some of the results that came out of the hook-type comparisons when bait fishing. “We found catch rates were generally similar across each of the three baited hook types, but that offset circle hooks were a bit more effective overall,” Capizzano says. He surmises that this may be because the study included anglers with a broad range of experience, some of whom set the hook (as with a J-hook) while others let the fish hook itself (as with a circle hook). The offset circle hook provided the best of both worlds.

Perhaps the most surprising result had to do with how to bait hook-type affected injury. “There was barely any deep-hooking on our bait rigs in this study, even with the J-hooks,” says Capizzano, noting that deep-hooking is often linked to higher mortality rates after release. “One reason for this might be the fishery’s common practice of rigging hooks on short (a few inches long) dropper loops, which prevents a fish from swallowing the bait and getting gut-hooked regardless of hook type.” In other words, in this study, inline circle hooks were not found to be a major benefit as they have been in other fisheries, highlighting the importance of conducting species- and fishery-specific research when it comes to evaluating the conservation benefits of gear types. In fact, due to their propensity to lodge firmly in the corner of the mouth, inline circle hooks led to longer unhooking times and thus greater air exposure for fish prior to release, particularly for inexperienced anglers.

From Research to Action: Best Practices for Anglers

With results from this recent study in hand, Capizzano has some simple yet powerful recommendations that anglers can employ to catch fewer cod and improve the survival of released fish—both cod and haddock—after release.

For haddock, the research found that bait is king; a juicy hunk of clam or squid on the bottom is far more likely to get slurped up by a haddock than gobbled down by a cod. “From our hook type comparison, we learned that simply using bait, no matter what hook you prefer, is the most effective way to reduce cod catches,” Capizzano says.

“We don’t want to discourage the use of any hook type, including inline circle hooks, but I recommend the use of offset circle hooks when targeting haddock since they led to both a higher hookup rate and reduced unhooking/air-exposure times.” For the jigging purists among us, Capizzano recommends switching to single hooks. While they may not reduce cod catch compared to other hook types, they will reduce foul-hooking and maximize post-release survival.

The next step for the research team is to make their results broadly available to the recreational fishing community. While some of the findings affirm what many folks may already suspect, having the hard data on the conservation benefits of different terminal tackle provides valuable guidelines for how anglers can keep putting haddock in the boat while helping to steer cod on a path to recovery.