How To Grill a Whole Fish

Last weekend I headed out fishing for black sea bass with On The Water contributing writer John Silva. Late May is always a good time to target sea bass in Buzzards Bay, and this trip lived up to my expectations.

While many people prefer to use bait for catching sea bass, I find that jigging for them with artificials is much more productive for putting big fish in the cooler. By using jigs instead of bait, you’ll spend a lot less time dealing with prickly and pesky scup, and you’ll increase your odds of getting a whopper sea bass.

My favorite jigs are soft-plastic shad-style baits. They won’t pick up a lot of weeds, the single hook makes landing and netting them easier, and the fish seem to hold onto them longer than metal lures, which helps increase hookups. The downside is they are disposable, and after about 10 fish they will get mangled, and you’ll need to replace them. Traditional metal jigs like the Crippled Herring, Kastmaster or bucktails are always a good choice, and I’ve caught plenty of nice sea bass with them. For best results, use a light graphite rod and braided line (20-pound test is plenty), which will allow you to have a good feel for the bottom. We generally find the most fish in 20 to 30 feet of water.

We only kept the largest fish, releasing most of the females (male sea bass have humps on their electric-blue heads like the one in the photo above, females have less color).  I ended up keeping 7 nice fish, which means I’ll be eating sea bass every night this week, which is just fine with me.

Sea bass is a very mild, white-fleshed fish, and it’s one of my favorites. It’s very versatile, and works in a lot of different recipes. One of my favorite ways to prepare sea bass is to cook them whole. Eating a whole fish makes for a primal yet delicious meal. It might be a bit messy, but it sure is tasty. Cooking a fish whole on the bone makes it tastes better. The skin protects the delicate flesh, the bones keep it juicy, and you can stuff the cavity with flavorful citrus and herbs.

The first step is to scale the fish. They make a special tool for this task, but I find a rigid steak knife will get it done just fine. Scrape the fish “against the grain” until all of the scales are off. This is a messy endeavor best done outdoors, as the scales will end up flying all over the place. Next it’s time to gut the fish. A good pair of kitchen shears is the best tool for this task. Open up the belly of the fish and rip the guts out. You’ll also want to cut out the gills. I also like to trim down the fins and tail so they won’t burn on the grill.

Now it’s time to fire up the grill. Get  it as hot as it will go, and take the time to thoroughly scrape the grates. Once the grill is red hot, give the grates a good coating of oil or cooking spray, which will help prevent the fish from sticking to the grill.
Now put the whole fish on the grill, close the lid, and turn the heat to low. Cook the first side for about 10 minutes. Resist the urge to probe, poke or move the fish! The less you mess with it, the better the odds it won’t stick. 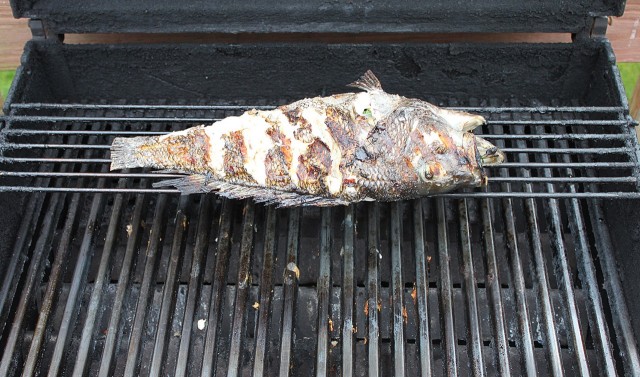 Now it’s time to flip the fish. Use a large spatula and be careful! You’ll only have one shot. I like to finish the fish on the “upper deck” of the grill like in the photo above. Close the lid, bump the heat up to medium, and cook for about another 10 minutes.
Serve the top fillet first, then grab the tail and lift it. The entire backbone will pull right out, revealing the bottom fillet to pick at.
The finished result was a delicious, succulent dish that might have been one of my favorite fish meals so far this year. The meat was firm yet juicy and full of flavor. Cooking a fish whole on the bone changes a fishes flavor quite dramatically, and in my opinion makes it taste much better. Give it a try this summer, you won’t regret it!