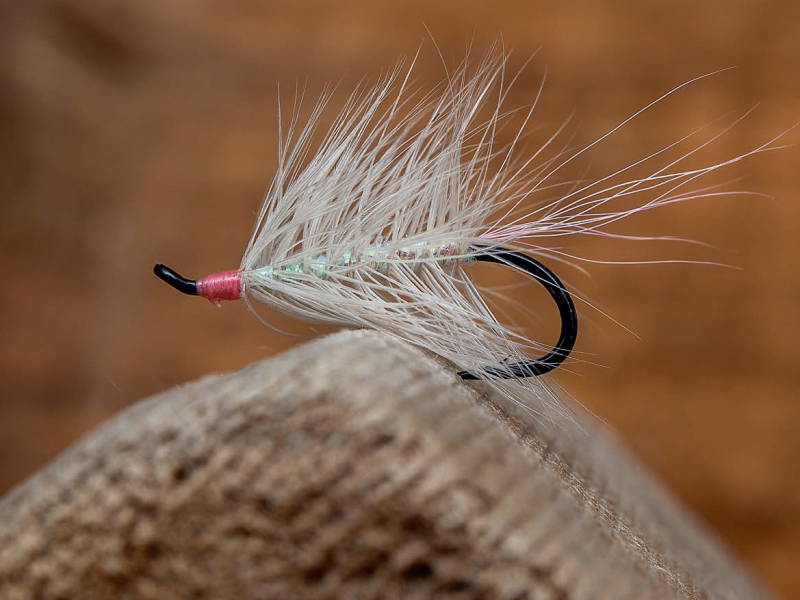 Here’s how to make a tasty grass shrimp solution.

Step 1: Collect several grass shrimp. Step 2: Mix in a blender with mint leaves and ice. Step 3: Serve over vanilla ice cream or banana cream pie. No, wait, this is a different kind of solution. But, I digress.

Steve Culton runs Current Seams (currentseams.com) and is a guide, outdoor writer, speaker, and fly-tyer from Connecticut. This is his pattern for 1- to 2-inch grass shrimp eaten by several gamefish, especially stripers.

Steve said, “Grass shrimp are a common bait found in the marshy outflows and estuaries of the Northeast. They swarm to the surface at night and stripers show up in numbers to eat them. My favorite waters are the brackish, marshy outflows of Connecticut, Rhode Island, and Cape Cod—rivers with sod banks, mucky footing, and reeds everywhere. Visibility is sometimes as little as 1 to 2 feet, but the stripers are always able to find them or an artificial fly. May through October is prime time for grass shrimp.”

Most of the shrimp flies Steve sees attempt to duplicate the natural in great detail. But, features like eyes, jointed legs, and sculpted epoxy bodies catch more anglers than stripers. He said, “Shrimp are a simple bait, so I wanted a simple fly that was easy to tie and looked alive in the water … like something good to eat. I also see a lot of shrimp flies that have weight incorporated into the design, but grass shrimp move to the surface at night to feed. Night is when I would predominantly be fishing this fly, so it has no built-in weight.”

The Grass Shrimp Solution works well because when viewed from below, it has a translucent quality, just like the real shrimp. It creates the illusion of mass without adding bulk. The bucktail antennae quiver in the current, and the soft hackles breathe and pulse.

Steve explained, “I fish this fly as part of a team of three flies. The other two can be this fly or any other small shrimp-like pattern. The line is always a floating line because I’m trying to imitate shrimp swarming near the surface. I look for the rise rings of feeding bass and cast over that position. If there is current, I try to fish the team of flies on a dead drift, just as I would a dry fly. At the end of the drift, I let them dangle in the current, which causes the flies to swing up to the surface; they may even create a wake. I get a lot of hits from this last method.”

Nighttime is best for fishing grass shrimp patterns near the surface. Steve believes any moving tide is fine, though he prefers to begin at the top of a tide in a marsh or estuary just as it switches to outgoing. The pattern works in both moonlight and total darkness.

Steve recalls the following success: “It was early June, midnight, no moon, and the tide was just switching to outgoing. Two anglers I met up with reported a large school of surface-feeding stripers. They were using intermediate lines and stripping their traditional-sized baitfish patterns to no avail. I saw that the bass were feeding on something small and were remaining in place, waiting for the current to deliver grass shrimp to their open mouths. They were simply unwilling to chase a stripped fly.

I quickly rigged up a team of three, including a Grass Shrimp Solution, and made a cast, followed by a series of up-current mends. I immediately got hit; then another. I had a hit on every cast but one for the next 90 minutes. The group still talks about that night when the bass ate only tiny flies like the Grass Shrimp Solution.”