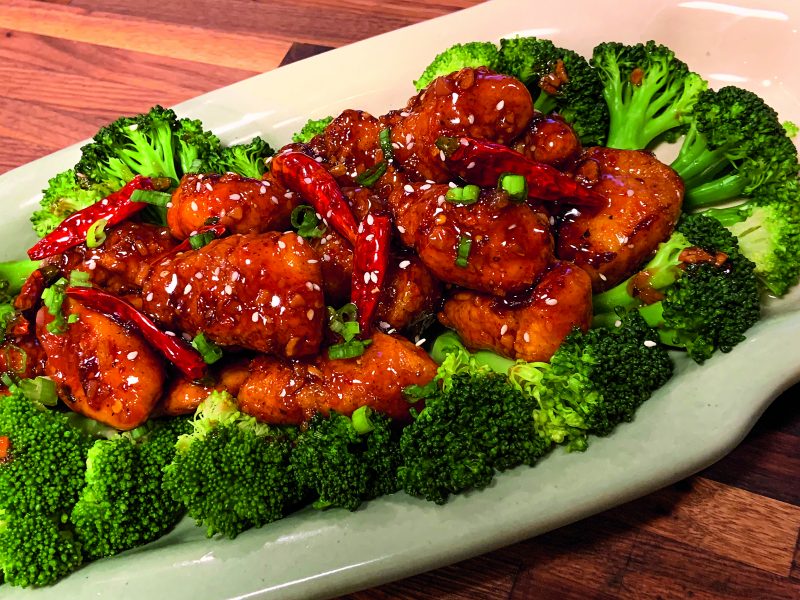 A few weeks ago, I stumbled upon a great recipe for General Tso’s Chicken. The sauce was amazing, far superior to any I’ve ever been served at a Chinese restaurant. It was sticky, sweet, tangy, spicy, salty, and jam-packed with garlic and fresh ginger. It was so good that I got to thinking, why use this sauce only on chicken? I also got to thinking: who the heck was General Tso?

Until recently, I had never put much thought into where the recipe came from, or who General Tso was. I always just assumed the dish was invented by a man named General Tso. I envisioned him as a fierce warrior who wildly rode around on a horse in a suit of jade armor. And the General, like the Colonel (Sanders, that is), could whip up a mean batch of savory fried chicken.

The truth, it turns out, is quite a different story.

I recently watched an enlightening documentary entitled, “The Search For General Tso.” It’s an in-depth look into the origins of the recipe, the man for which it was named, and the history of Chinese restaurants in America.

When it came to General Tso, however, the locals knew all about him. The city of Hunan was his home in the late 19th century, where he remains well known to this day. There is a General Tso museum, General Tso Hotel, General Tso square, and even General Tso liquor, which is a favorite of the locals.

The General, it turns out, was the real deal, and was known for always being successful in battle. During his term as Imperial Commissioner, he suppressed the Nian Rebellion. In 1875, he was again appointed Imperial Commissioner to supervise military action against the Dungan Revolt. By the late 1870s, he had crushed the Revolt and recaptured Xinjiang province from rebel forces.

Hunan is perhaps best known for its hot peppers, which the General was said to be fond of. But, the General never got to taste a bite of his now-famous fried chicken. It would be another 100 years before General Tso’s chicken became a thing.

While General Tso’s chicken has no connection to the General, it does have roots in Hunan. The dish, as most Americans know it today, was given its name by Peng Chang-Kuei, a chef from the Hunan province. Peng orchestrated and supervised the banquets of the Chinese Nationalist government from the end of World War II until it was toppled by the Communists in 1949. Peng fled the country and took refuge in Taiwan. During the 1960s, Taiwan became a stronghold for authentic Chinese food. Peng started his own restaurant there and served food inspired by traditional Hunanese cooking. Many of the names he gave his dishes were linked to his homeland; thus the birth of “General Tso’s Chicken.”

Peng’s original version of the dish was very much different from what you and I associate with General Tso’s chicken, however. The sauce was similar, although it was more sour than sweet. The chicken was served on the bone and wasn’t breaded and fried. And broccoli was never on the plate.

Back in America in the early 1970s, Chinese food was also catching on. Restaurants were popping up like mushrooms across the country as Americans began seeking more “exotic” foods. New York City was at the forefront of the Chinese food boom, and it was there that a chef named Tsung Ting Wang founded Shun Lee Palace, an upscale establishment that specialized in Sichuan cuisine. (It is still in operation to this day.) Wang soon discovered that American diners had a much different palate than he was accustomed to serving in his homeland of China, so he began altering traditional dishes to make them sweeter and eased up on the heat.

In 1972, chef Wang took a trip to Taiwan to get inspiration for new recipes to add to his restaurant’s menu. He visited Chef Peng’s establishment and had his first taste of General Tso’s Chicken. Wang must have been inspired; upon returning to New York, he added the dish to his menu, with two critical alterations to make it more appealing to the American palate. First, he took note of America’s newfound obsession with fried chicken, since Kentucky Fried Chicken was one of the fastest-growing franchises in the country at the time. He decided to bread and deep-fry pieces of chicken thigh instead of serving it on the bone. He also knew Americans had an appetite for sweets, so he added a copious amount of sugar to the sauce (as well as a dash of MSG).

The rest, as they say, is history. A New York food writer discovered the recipe, and it soon became the best-seller at Shun Lee Palace.

General Tso’s chicken is now, by far, the most popular “Chinese” dish served in America. And with over 50,000 Chinese restaurants in the U.S., it has become a multi-billion-dollar recipe. I found the following sauce recipe at rockrecipes.com. This sauce is the boss, a true must-try. And, it is way too good to just use on chicken. Once you taste it, you will want to put it on everything.

This variation uses fish instead of chicken thighs, and it is breaded and air-fried, not deep-fried, offering a lighter alternative to its Chinese take-out counterpart. But feel free to deep-fry the fish, as I imagine it will come out even better.

The original recipe didn’t call for MSG, but I added it in anyway, and I’m glad I did.

Let’s start with the sauce. DO NOT walk away from it; it gets very hot and must be stirred constantly.

Next, add the sugar and water to a heavy saucepan, set the heat to medium, and bring to a boil. Use a spatula to stir it constantly to prevent the sugar from sticking to the pan.

Boil for about 15 minutes until it thickens and the color turns to a light amber color and it starts to smell like caramel. DO NOT attempt to lick the spatula like I did – this stuff is like lava. When it reaches this stage, reduce the heat to low, wait one minute, and add the other ingredients. Bring the heat back up to medium and cook until the sauce begins foaming up in a froth. Cook, stirring constantly, for one minute, then remove from heat and add the dried chili peppers.

Now for the fish. Mix the flour, black pepper, cayenne pepper, ground ginger, and salt in a shallow bowl.

Cut the fish into 1-inch nuggets, toss them in the flour, the egg wash, then dredge them back in the flour mixture until well coated. Place them in a large zip-close bag (along with the leftover flour), and refrigerate for at least 30 minutes, shaking the bag occasionally.

Toss the sauce with the cooked fish nuggets and serve over rice and steamed broccoli. Garnish with chopped scallions and a dusting of sesame seeds. You must try this!

Last weekend I got out haddock fishing with Captain Jason Colby of Little Sister Charters. The fishing was downright stupid and we got our 6-man limit (90 fish) in just over 2 hours.

With a hefty pile of fish to work with, I decided to keep one smaller specimen to cook whole. Cooking a fish whole on the bone makes it taste better. The skin protects the delicate flesh, the bones keep it juicy, and you can stuff the cavity with flavorful citrus and herbs. Eating a whole fish makes for a primal yet delicious meal.

I had never cooked a whole haddock before, but I’m glad I did. I’m looking forward to trying this again with a flounder.

Let’s start with the fish. Scale it using a butter knife. (If the fish has sharp spines on the fins like a sea bass, cut them off with kitchen shears before scaling to avoid getting a puncture wound.) Give it a good rinse, then gut it and remove the gills. Thoroughly rinse and dry it off, inside and out, with paper towels.

Next, use a sharp knife to make diagonal slashes into the skin on both sides about 1/2 inch deep and spaced about an inch apart. Sprinkle both sides with salt and pepper. (I like to fashion an eyeball out of a radish bottom, which I secure with a toothpick, because I don’t like my food looking back at me while I eat it.)

Place the fish on an oiled metal baking sheet and brush on a layer of General Tso’s sauce. Next, blend the flour and cornstarch together, place it in a fine mesh strainer, and dust a thin coating onto the fish.

Roast at 310 degrees until it reaches 145 degrees in the thickest part. (My 3-pound haddock took about 35 minutes; bigger fish will take longer.) Brush on another layer of sauce, and broil about 8 inches from the heat source until the skin just starts to crisp up.

Arrange your fish on a platter and surround it with steamed vegetables of your choice (I used broccoli and bok choy). Drizzle the whole works with sauce and decorate it with chopped scallions.

Eat the top fillet, skin and all, until you get down to the bones. Grab the fish by the tail, and slowly lift it upward. If done carefully, all the bones will come out in one piece. Drizzle some more sauce on the bottom fillet and devour.

The Truth About MSG

For decades, MSG (monosodium glutamate) has gotten a bad rap for causing various side effects such as nausea, headaches, elevated heart rate, and a host of other ailments. But time and time again, MSG has proven to be safe.

MSG’s bad reputation can be linked to an article that appeared in the New England Journal of Medicine in 1968. A doctor named Robert Ho Man Kwok wrote a letter to the publication describing symptoms that he allegedly developed after several meals at Chinese restaurants. He claimed that the symptoms came from monosodium glutamate, which he believed had been used in his meals. The journal published Kwok’s letter with the title “Chinese Restaurant Syndrome,” sparking a widespread fear of the seasoning that would last for decades.

Despite the symptoms reportedly linked to MSG, the FDA, supported by dozens of studies, has repeatedly announced that MSG is safe.

And, MSG not just used in Chinese food. It can be found in many processed foods, including deli meats, hot dogs, crackers, potato chips, salad dressings, soy sauce, and just about every canned soup on the market. A little bit goes a long way, so a small pinch can make a big improvement in just about any dish.