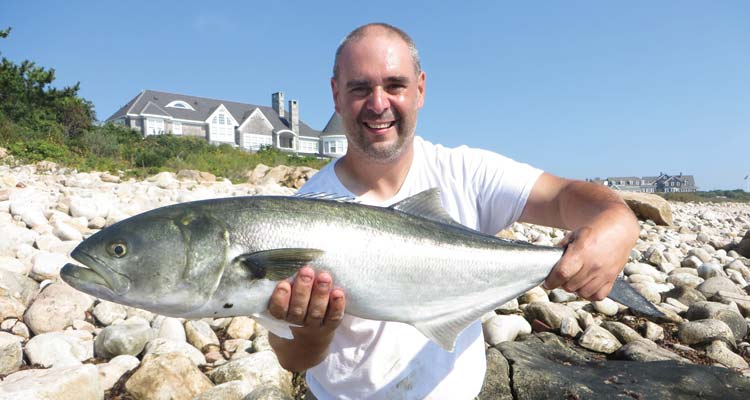 I caught more big bluefish in the Rhode Island surf last year than the previous five years combined. I’m talking large alligator blues, from 10 to 16 pounds. They were drawn close to the oceanfront shoreline by the massive amounts of bait present in the first half of the fall last year. I have every reason to think that will happen again this year.

Menhaden, or pogies, are the prime movers that lure big, hungry fall bluefish within a surfcaster’s throw. Whether the adult version or the smaller peanut bunker, it doesn’t matter. They are the filet mignon of the fall menu, and blues go crazy whenever this bait comes around. Last year, we had massive schools of peanut bunker migrating north along the south shore beachfront in late August and early September. I saw black masses of bait almost daily, schools that were sometimes the size of a football field, slowly moving toward the rocky areas northward of the south shore sand beaches. Each school would be followed by another soon after. This went on for weeks, and by mid-September, it was like a powder keg waiting for the blues to light its fuse.

And, blow it up they did. It didn’t take long for migrating bluefish to find this bait. However, not only did the blues find it, but schools of stripers and big numbers of false albacore as well as bonito discovered this bait. It set up some of the wildest September blitzes I have ever seen from shore. Many days, I landed the trifecta of albies, stripers, and bluefish. But, it was the size of the bluefish that was most impressive. These were large fish that we hadn’t seen in years.

There was a two-pronged approach I used last year to target these big blues. In the daytime, I would look for schools of bait. I’d drive around to find schools of the abundant peanut bunker or even the occasional school of adult menhaden. Find the bait, and I’d find the fish. Large plugs were most effective for daytime plugging.

The other approach involved fishing at night. I couldn’t see much bait at night along the featureless beachfront, but knew it was drawn to the outflow currents and moving water. In Rhode Island, these outflows are known as breachways, and there are many of them along the south shore that drain coastal ponds. Nighttime plugging was most effective when using some kind of swimmer or jig and letting the breachway currents impart most of the action to the offering.

When blues are on peanut bunker in the daytime, they can be fussy. As with most surfcasters, I like to start off with a topwater popper. It can be a standard popper or a longer-casting pencil popper—just about any size will do. I especially like to use light-colored poppers to mimic the color of the menhaden. All-white or white-bellied models seem most effective. Sometimes, the blues will devour a popper but sometimes they will whirl and chase, but not take it.

If the popper is not working, I will go with a more subtle topwater approach. A Rebel Jumpin’ Minnow is usually my second choice in topwater plugs. When vigorously twitching the rod tip and reeling slowly, this plug will dance and dip on top of the water in alluring movements that both stripers and blues find irresistible. Note that Jumpin’ Minnows come with hooks and split rings that will not stand up to big bass and blues. I change them out and use VMC 4x trebles in size #1. I like the Jumpin’ Minnow in either the bone color or the blue-back model. This is a small plug that does not cast as far as a popper, so I primarily fish it when I have the wind at my back.

My third choice for topwater plugs when blues are feeding on menhaden is to go with a needlefish plug. I make my own and like my smaller version, a 5-inch model. I try to keep this plug near or on the surface and dance it around like a Jumpin’ Minnow.

My final choice of lure for fussy blues is a metal. I use the standard Acme Kastmaster or the elongated Kastmaster XL. A couple of added advantages to going with a metal lure is that it casts like a bullet and can reach fish that are out of range for most plugs. The Kastmaster XL is also an albie slayer, so it is a good choice when both albies and blues are present, which seems to happen often.

Nighttime at the Outflows

For the most part, I like fishing moving water at night. It seems the abundant daytime bait disappears as nighttime falls, but if you hit the outflows on the outgoing tides, you will find bait congregated there. The main outflows along the Rhode Island oceanfront are Weekapaug, Quonny, Charlestown, the Galilee Channel, and Narrow River, and they stretch from the far south in Westerly to Narragansett. All are located off Route 1, which parallels the south shore beachfront, and all are well identified on any type of map. Most offer some sort of parking and public access close by for fishermen. One, Charlestown, even offers camping along the side of the breachway.

I will warn you that these outflows are well-known bluefish and striper haunts in the fall and are often crowded with fishermen who fish in rotation at the ends, usually the prime spots to fish. Late night and lousy weather sees less pressure. I often get away from the crowds by moving back in the breachway, opting to fish along the jetty that borders most of these flows to the back.

The most effective technique in these flows is to use some type of swimmer. I especially like the Daiwa SP Minnow in a white color. It casts better that any other plastic swimmer and has a tight wiggle that moves well in a fast current. I cast cross-current and hold it in the flow while it swings around—I can feel the rod tip pulsating as the plug swims. Some fishermen like to freespool their swimmers off the ends of the jetties to get them way out. This works best when few fishermen are competing for space.

I know other fishermen who like to use large wooden surface swimmers in the breachway currents at night. These Danny-style plugs work much like the plastic offerings but can cast even farther with a slight wind at your back. These big wooden swimmers work best when large adult menhaden are around.

Another interesting approach that has gotten me some big blues is to use a large bucktail jig. This works well in the deeper flows such as Charlestown, Weekapaug, and the Galilee Channel. I might use a jig that weighs 1 to 2 ounces, depending on the speed of the current. I make my own jigs and prefer a hotlips-style jig, which seems to really dig the bottom. I’ll spice my jigs with a curly tail or pork rind. I like to keep my jigs scratching along the bottom so I’ll cast cross-current and finger the line coming off the spool. You can feel when it hits bottom. That’s when I put the line on the roller (I fish a bail-less reel) and begin to pull the rod tip upward and then let the jig settle back down with little or no reeling. Once the jig straightens out in the current, I reel it in. I know when a fish hits as they typically slam this offering.

Here’s one more valuable tip for catching big blues in the fall: carry a snagging hook in your surf bag. You cannot believe how many times I have stumbled upon a pod of large menhaden getting chased by big blues in the daytime or evening. When there are only a few blues under the menhaden, they can be near impossible to catch with a plug. However, snag a menhaden and let it sink, and the blues will devour it almost immediately. Yes, there is no substitute for the real thing, at times, and this is often a surefire way to land either a big blue or a large striper.

So far this year, we have already seen good numbers of peanut bunker and adult menhaden along the Rhode Island oceanfront and in Narragansett Bay. If this year follows a similar pattern to last, expect to find good numbers of alligator bluefish in the fall surf, along with albies and keeper bass. In all likelihood, prime time should be from September into late October, which coincides with the best time to find abundant peanut bunker. Be ready for good daytime and nighttime fishing. With a bit of luck, you have a good shot to snare your biggest bluefish of the year.