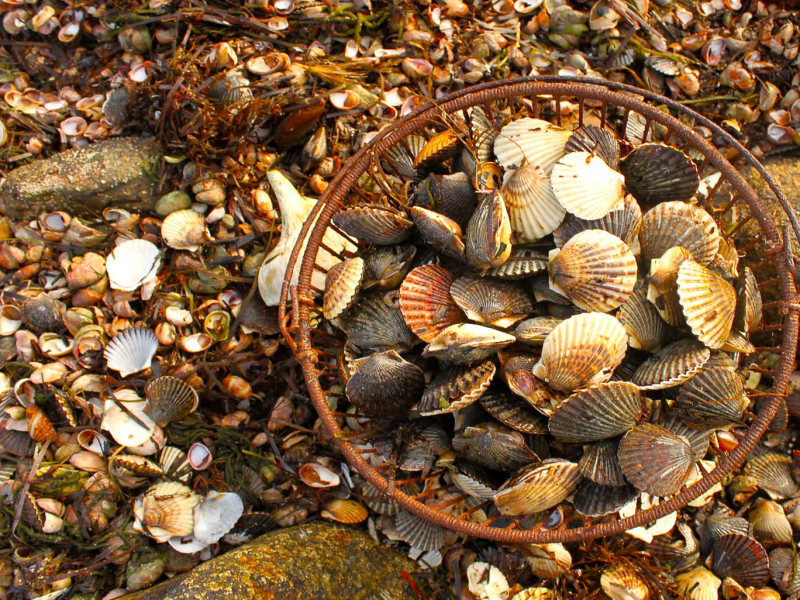 In the minds of many culinary experts, bay scallops are the most delectable treasures from our local waters. When you find bay scallops in local fish markets, expect to pay at least $30 per pound. Do not confuse them with sea scallops, however, that live in depths of at least 60 feet and are much larger. A bay scallop shell is the size of a softball and lacks defined ridges. Fresh, local sea scallops taste great, but fall well short of the sweetness of a fresh bay scallop.

Bay scallops are not nearly as plentiful as they once were, mainly because of the destruction of eelgrass beds. (Nitrogen run-off has been blamed as the primary reason for the downfall of the eelgrass.) Bay scallops depend on eelgrass for their survival, so without it, their chances for survival diminish. There are good years and bad years for bay scallops and, lately, it seems there have been more bad than good.

Bay scallops live in depths from 3 to 30 feet, but they do not bury into the bottom. They live on top of the seafloor and depend on camouflage to avoid predation. It is also the only local bivalve that can actually “swim.” It has a large adductor muscle (the only part of a scallop that is usually eaten) that allows it to rapidly open and shut its shells, providing a jet-propulsion mode of transportation. Don’t worry, though, because it can’t swim fast or far, so you don’t have to worry about chasing it down.

You won’t need a shellfish gauge to measure bay scallops. A “keeper” scallop is defined as “having a first annual growth ring.” When a scallop turns one year old, it develops a defined ring around its shell (kind of like a ring in a tree trunk).

To gather bay scallops, start out by locating areas that feature plenty of healthy eelgrass. I’ve found a few hot spots by using Google satellite images and checking for areas with dark bottom. Bay scallops are equally at home in the open ocean as they are in bays and estuaries, so you’ll have to look around.

Do not expect anyone to give you a hot spot to gather bay scallops. A fertile bed is sacred to a shellfisher, who would rather take it to his grave than give it away.

One popular method of collecting bay scallops employs the use of a contraption with a scallop net and a Plexiglas window (called a “hood”) that allows you see everything on the bottom. The net has a long handle and a small-diameter opening with a long purse behind it. In a pinch, you could get away with using a quahog rake or a crab net, but it’s a bit awkward.

Head out at low tide. Tie your hood and shellfish basket to your waders and go out as deep as possible. Simply cruise around the eelgrass beds while looking through the hood. The scallops blend in pretty well, but their distinct round shape on the bottom usually gives them away. When you find one, simply scoop it up with your scallop net. The extra-long mesh allows you to keep the net underwater and it can hold dozens of scallops before you need to bring it up and empty it into your basket.

Walk along slowly and deliberately. I like to move in a zigzag pattern to make sure I completely scour an area before moving on. I usually find the most scallops in deeper water, so going out on a moon tide gives me access to areas that receive less pressure and I can cover more ground.

If you own a seaworthy boat, you can gather bay scallops using a dredge. If you look around hard enough in some seaside shops, you just might find one. It’s basically a smaller version of the same dredges used on commercial boats, and most local regulations allow recreational shellfishers to use them.

A dredge consists of metal mesh on a chain that drags along the seafloor with a net that rides behind it. Set it behind the boat and slowly drag it along the bottom. When the mesh hits a scallop, the scallop instinctively clamps its shells shut, which propels it up off the bottom. The scallop falls back down and is scooped up in the net.

This is tough work and beats up a boat, but it produces. If your boat doesn’t have an electric winch, you are in for a long day.

Using a wetsuit and snorkeling gear is another great way to harvest bay scallops, but bring along a scallop net anyway so you don’t have to constantly dive to the bottom. A dive bag and a diving flag are also musts.

Since many bay scallops live in the open ocean off our local beaches, they are vulnerable to intense storms. Large waves that sweep through at low tide sometimes lifts bay scallops right out of the eelgrass and washes them up on shore. You can simply walk along the beach after a good storm and fill 5-gallon buckets with washed ashore scallops. It’s scavenging at its finest. However, it generally take a powerful storm to make this happen. The wind must blow at least 30 knots for two straight days and it must be blowing directly onshore. Throw in a moon tide and it’s a recipe for success. I’ve only witnessed this phenomenon in late fall and early winter, which I think is the time of year that scallops are closest to shore.

Look for any areas on the beach where large clumps of eelgrass are washing up. Bundle up and get down to the beach at sunrise, before the seagulls pick the place clean. It’s best if the tide is low, but it’s not essential. Simply walk along the shoreline and look for scallops. You will sometimes have to dig through piles of eelgrass to find them; other times, they will be constantly pushed up onto the beach with every incoming wave. If the conditions are right, you will fill up a bucket in no time at all. Some of the shells might be broken from pounding in the surf, but they are still plenty good to eat. You will feel like a caveman, but it’s all in the name of fun and free food.

Always shuck scallops as soon as possible; they are fragile and don’t live long out of the water. They are easy to shuck, but it is tedious work. If you don’t have a proper scallop knife, you can get away with using a butter knife. Insert the knife at the hinge of the shell and cut along the top of the shell. Pop off the top shell and cut around the abductor muscle to separate it from the membrane. Then flip the knife under the abductor muscle and it should pop right out.