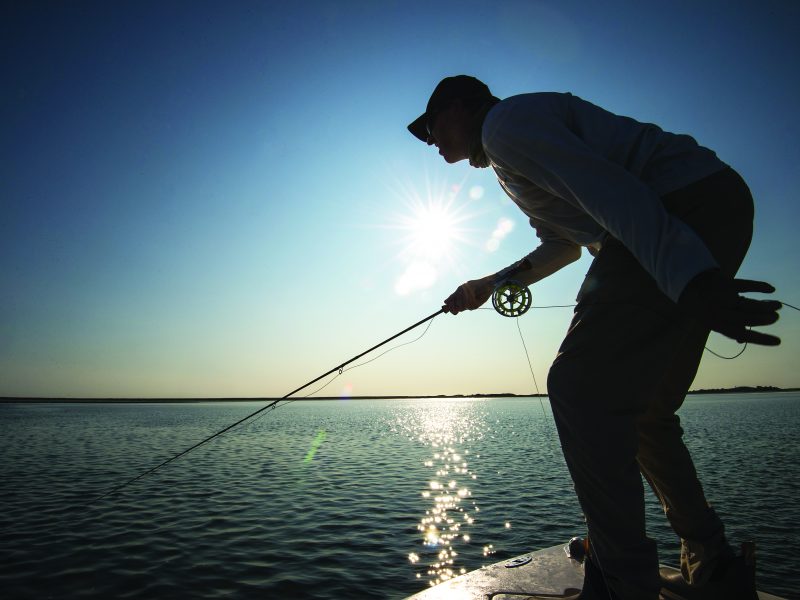 In 1972, Kenneth E. Bay published a book called Saltwater Flies: 50 Popular Patterns and Tying. The book illuminated famous flies that have since become staples of the saltwater community – like Lefty Kreh’s Deceiver. But, it also showcased many regional flies and tyers with unique perspectives and ideas. That same year, a young tyer from Seaside Park, New Jersey, got a copy of this book and began to experiment with some of the patterns illustrated in it. 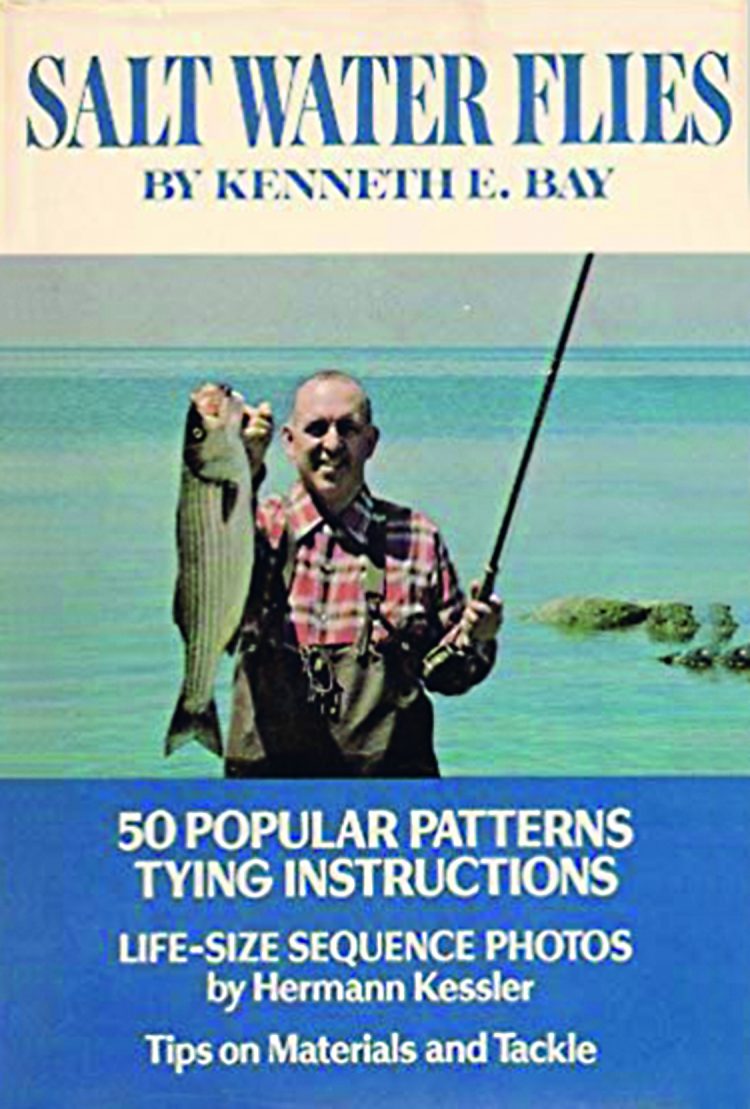 “It was always about solving problems,” Bob Popovics said recently. “I’d tie up a Brook’s Blonde, and after a few bluefish it would be destroyed. So, I started to tinker.” For most patterns, he noticed an option was given for using either cement or five-minute epoxy on the head and thread wraps.

“When I used epoxy, the head was never damaged, so I asked myself, What if I coated the whole thing with epoxy? The shank would be protected, but it was unsightly, yet it worked,” Popovics said.

He began experimenting with one of the featured patterns in the book: Mark Sosin’s Blockbuster. Bay described Sosin this way in the book: “Mark Sosin is already well known to saltwater fly-fisherman, but in the years to come, he will continue to contribute so much to the sport that it is almost certain he will be remembered as one of the ‘greats’ in the field.”
We know now how prescient Bay’s words were. Sosin’s career in fishing media is legendary and spans both print and television. He is certainly regarded as one of the “greats” by most modern anglers.

Sosin’s Blockbuster or “Hi-Tie” (as it was also known) combined a series of bucktail bundles and mylar flash tied up the shank toward the hook eye, and then a final coat of epoxy was added to the under belly to protect exposed threads. “When I was tying the Blockbuster, I always put too much [epoxy] on and it would drip,” Popovics said. “By tying the Blockbuster, I learned how to control the dripping epoxy.”

He then noticed a fly in Bay’s book that did many of the things he was thinking of. The whole shank was coated with epoxy, and it had the interesting profile of a baitfish. That fly was Hal Janssen’s Hamada Silverside. Popovics called Janssen’s fly “eye-opening”, but instead of the mylar tubing and balsa wood the pattern called for, Popovics wanted to “control the fibers”. He began working to shape the profile with epoxy and his bodkin the way Janssen had shaped his Silverside with cut materials. After many sessions and multiple tests at Island Beach State Park, he finally found a profile he was happy with. “I then left it alone,” he said, “I moved on to other problems.”

In 1984, Popovics got ahold of Ultra-Hair fiber. “That was one of the biggest advances in the Surf Candy,” he said. The sleek, synthetic fiber allowed for easy sculpting around the hook shank. Around the same time, Popovics began to host Tuesday night tying sessions in his attic work room after the Saltwater Flyrodders of America Chapter One disbanded. The Surf Candy was one of the most popular patterns that Popovics demonstrated, and in 1990, Fly Tyer magazine ran a detailed article on the Surf Candy, and the pattern became a staple of saltwater anglers the world over.

Popovics later authored the best-selling books Pop Fleyes and Fleye Design, with the Surf Candy being one of the tentpole flies among his many innovations.

In the early 1950s, Hal Janssen was a young man fly-fishing the San Lorenzo River estuary in Santa Cruz, California, for silver salmon. He was eager and excited, and he fished “every available day.” In those early days, Janssen recalled that their fly tying was simple. “We saw things in the water and we imitated them,” he said recently from his home in Forest Ranch, California. (Hal was fortunate enough to avoid the devastation of the recent fires that destroyed Paradise, a neighboring town.) “In those days, I fished every moment I could, and I remember meeting a special guy along the way.”

Janssen called Eddie Hamada “a maverick fisherman.” Janssen used to marvel at the way Hamada’s short, 6-foot fiberglass rod always managed to catch fish on the San Lorenzo. When Janssen finally got the courage to strike up a conversation with Hamada, he found him to be “a gentleman, but completely frail and fragile.” Janssen found out later that Hamada suffered from a debilitating disease that eventually took his life. “But Eddie was just one of those guys,” Janssen recalls, “who was generous and such a good fisherman.” Hamada showed Janssen a small fly made with mylar tubing and a marabou tail meant to imitate the small scuds and silversides common in the channel. They tied together, and Janssen realized what a deadly pattern the fly was.

Hamada passed away shortly thereafter, but the fly, now popularized in the San Lorenzo by Janssen and other fishermen, affectionately became known as Hamada’s Silverside. Years later, Janssen began fishing Lake Berryessa in Napa Valley and developed the stillwater techniques made popular in his book, Stillwater Fly-Fishing Secrets. Janssen was one of the first people to use a float tube in still water to stalk trout. He approached quietly and sometimes threw to the trout in skinny water. Those fish were chasing a small baitfish with a thin profile. It was then that he returned to Hamada’s pattern, but he did some work to amend it.

“I used the Styrofoam from a soda bottle when they used to make them that way. I peeled off the label, formed it into a tear-drop shape, then put white thread loosely over the Styrofoam. I made a marabou tail, added the mylar tubing, then coated the whole thing with epoxy or Hard as Nails. It wasn’t until 1967 that I started really using five-minute epoxy,” Janssen said. The Silverside then became his go-to pattern on the lake for trout. “It was never a saltwater pattern,” Janssen continued, “but Ken Bay had heard about it and included it in the book.”

When I asked him about his inclusion in the book, Janssen was very polite about it, but said, “I never heard from [Bay], but it’s okay. I was just glad that other people used [the fly] and liked it.”

Janssen spent most of his professional career as a developer for the Sunset Fly Line Company and worked on many of the advances in fly line technology that we appreciate today.

In the early 1990s, Ed Rice hosted the International Sportsmen’s Expo in California. Both Hal Janssen and Bob Popovics, whose Surf Candy was becoming one of the most popular patterns tied, were scheduled to be featured tyers and presenters.

“I really looked forward to meeting him,” Popovics said about Janssen.

Janssen was keen to meet Popovics too. The way that Popovics perfected the five-minute epoxy technique allowed people the world over to create the sleek and translucent baitfish profile many sought for all different types of fisheries, and Janssen was eager to speak with him about it.

Both men recalled their meeting with fondness. There was a mutual respect and understanding between them. Neither could fully recall the extent or the length of their conversation, but the moment, the experience, and their shared creativity was certainly embedded in both of their memories. Their collaboration, through years and distance, has made a lasting impression on fly-fishing.