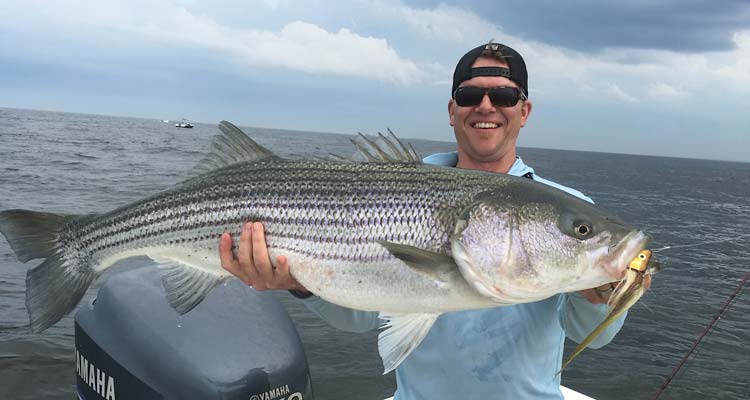 For cow bass on the fly it’s tough to beat the bait and switch.

Hey, Captain, we’re ready to get some forty-pounders on the fly today,” was how the trip started. Pressure for a fishing guide? Heck, yeah! I had booked these guys six months earlier at the Fly Fishing Show in Somerset, New Jersey. They had heard about big striped bass on bunker and wanted in on the action. Pulling a large striper from a bunker school using feathers isn’t easy and fish into the 40s are not that common, but I could tell these guys were “sticks” and knew we’d have some shots. Two days were booked—meanwhile, they started tying big bugs and practicing with 10 weights. I started obsessing about how to get this done.

There are a lot of charter and pleasure boats catching big fish on the New Jersey shore every spring. Some boats catch more consistently than others, but most catch their big fish by live-lining bunker. Live-lining is productive and fun, but my clients pay me to fly-fish, so several years ago, I had to figure out some tricks so that my clients could score more consistently with fly rods. After a lot of trial and error, effort, time, and miles on the water, here is what I came up with.

The early bird gets the worm, right? For me, not so much. Timing is everything when trying to pull a 40-pounder out of a bunker school using a fly. Most of the boats fishing the Jersey Shore when the big bass are in set out first thing in the morning. They get on the pods or on their “pieces” and catch their fish. Often, they will have six lines out, each with live bait on the end. This makes it extraordinarily difficult for my two fly guys to convince a big striper to grab a 10-inch hunk of feathers when there is so much live bait around. It’s not going to happen often.

To combat this, I’ve stated running my trips from the late afternoon into evening. I find that there are fewer boats out in the evening and the fish are more active, especially the surface feeders. My fellow guides like to make fun of me, saying that I don’t like to get up early. This may be true, but the late afternoon bite works for me—and the bar at the dock is usually hopping by the time we are done!

The Jersey Shore doesn’t have as much well-defined structure as other famous striper grounds (Montauk, Rhode Island, Block, etc.), so the fish could be anywhere. Having a good on-the-water network and being willing to drive is a big part of finding large bass willing to take flies. I’m fortunate that many of the six-pack captains out there every day are my buddies. They are free with their information about where and when the bite has been, and I try to do the same. Word to the wise—don’t broadcast what you learn from the kindness of others. If you do, that good info may stop coming your way.

When I don’t have intel, it’s nice to have calm conditions, a four-stroke and a good pair of binoculars because I am going to be running to find the fish. I average 80 to 100 miles per trip. You can find happy, free-swimming schools of bunker right outside the dock, but these aren’t the schools you want… look for bunker that are tightly schooled, with whitewater on the edges. You’ll know the right kind of pod when you see it.

Once you’ve found a school of bunker with a few blowups and are confident that fish are around, if you motor to the edge and start casting and casting and casting, your success rate will be limited. Fly-fishing for stripers isn’t like swinging flies to Atlantic salmon—these fish are eating. However, those hundreds of thousands of bunker swimming around look a bit more enticing than your bucktail and chicken feather creation.

A good buddy of mine, Captain Rob Radlof, is an exceptional fisherman who consistently catches big fish. He isn’t a fly guy, but he doesn’t live-line much either. He has an arsenal of large surfcasting plugs that really produce when worked properly. Since his surface plugs seem to turn the fish on, maybe even more than a live bunker on a J hook, I thought I might be able to incorporate the plug into the fly game by using the tease and switch.

The tease-and-switch method isn’t my creation, and it isn’t new. However, I haven’t seen it used as much for striped bass fishing as I have for other species, and it has turned out to be an incredibly productive method for me.

Although you can use many different types of surface poppers, by far the best teaser plug is a hookless Musky Mania Doc. This big “walk-the-dog” plug is the only lure I’ve found that maintains such a good action without hooks. Don’t go crazy with colors—the blank white model works best. To help ease the burden of throwing such a heavy plug for most of the trip, I use a soft, medium-action rod. I typically wouldn’t use this type of rod if I was fishing the Doc with hooks, but the softer action helps lob the plug out and imparts plenty of action. Also, although I use braid, there is no need for a leader. I tie directly on so I don’t have to worry about leader knot going through the tip-top.

Although I can probably cast twice the distance with the Doc as my clients can with fly rods, I still try to air out every cast because bass will follow the plug all the way into fly-casting range. Often, a bass will hit at the top of the cast, with the commotion attracting more fish. By the time the plug is in fly-casting range, there might be 4 or 5 fish chasing it.

Once the plug is within range, I have my guys cast right to it. Landing within a foot or so is fine because you want to prevent tangling. If the boys have cow fever, I have them make their best casts before I throw the popper—to bring the fish to the flies.

Once the plug reaches the flies, I need to clear it as quickly as possible. Jerking the rod tip up on a tight line usually gets the plug out of there; however, if there is any type of disturbance/chop on the water, pulling the plug may not go that smoothly. As long as the flies are moving, I can just stop moving the plug—there’s a good chance the fish will peel off it and eat the fly!

The fish are big and so are the flies, so I use fast-action 10-weight rods. As far as lines, there is something to be said about all types. A mega-taper floating line may be my first choice if it isn’t windy. It’s easy to pick up off the water, which definitely helps when you need a quick delivery to a breaking fish.

If you have some wind, both intermediate and sink-tip line helps load the rod quickly and deliver a big fly. Although these lines sink, they still produce just as well when fish are feeding on the surface – the faster you strip, the further up in the water column the fly will be.

As far as flies are concerned, big is better, but big and castable is best! A big silhouette and some flash on them are needed, but not weight and girth. I find that sparsely-tied 8- to 10-inch Hollow Fleyes and yak hair flies are easy to cast and move well in the water. Although these flies are long, they should still be tied on a short or standard shank hook for a more solid hookset. I’ve found that a long shank hook acts as a lever that can easily work its way out of a fish’s mouth.

It’s a beautiful June evening as we pull up on an active bunker school. Both Jesse and Pat are standing by with fly rods in hand. We have perfect conditions, and I wouldn’t mind them getting a few fish on the boat using spinning rods, just to take the edge off. I mention this to them and they both give me a look. On my second cast with the Doc, it gets blown-up on and both have their bugs on the plug immediately. Three strips later, Jesse has a 46-pound striped bass on. Then a 44. Then, Pat had a 42 and Jess had a 48.

The boys had six fish over 40 pounds and many more in the 30s in two days. These guys are great fly-anglers, but to get that many large stripers on the fly is—in the true sense of the word—epic!

No matter where you fish, picking the right time, putting in maximum effort and using the right tactics will produce fish. If you are looking for striped bass in areas where large baitfish are prevalent, try the tease-and-switch game. When the fish start going, it’s about the most fun you can have on a boat using a fly rod.