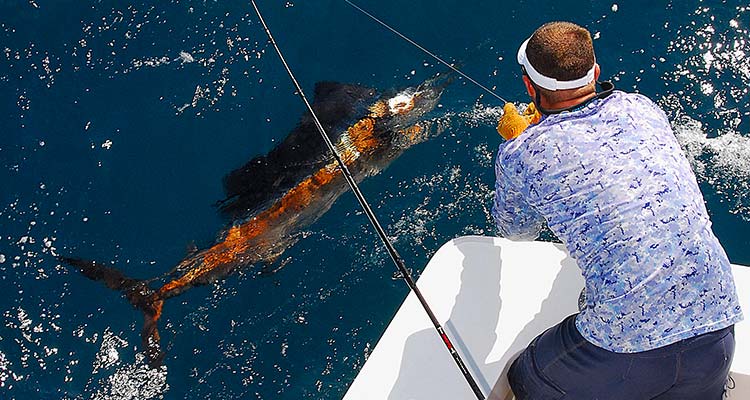 From bluegills to blue marlin, the International Game Fish Association governs the rules of angling.

Prior to 1940, there was no standardized set of angling rules that fishermen across the globe could follow, and while most of the guidelines in place until then were simply that, a universal set of angling rules and tackle requirements needed to be crafted before any thought of establishing world records for the size of fish caught could be considered. The International Game Fish Association, often referred to simply as IGFA, was founded in 1939, and immediately set forth as one of its first priorities the creation of angling guidelines and requirements for world record saltwater catches. While freshwater record keeping had been discussed by IGFA in the early years, it wasn’t until the late 1970’s when Field and Stream magazine turned over the record keeping of those species to IGFA. Shortly thereafter, saltwater and freshwater fly-rod record keeping came into the fold, and IGFA became the central body for gamefish record keeping. Today, IGFA continues to be the governing body for angling rules and the steward of a variety of world record categories for adults and juniors, fresh and saltwater anglers, and fly fishermen.

Jack Vitek is the world record coordinator for IGFA, whose headquarters is located in the World Fishing Hall of Fame and Museum in Dania Beach, Florida. Vitek’s primary job is to scour over the hundreds of record applications that flow through his office each year. “Last year we had approximately 800 world record applications, though that number was up a bit because of the new All-Tackle Length World Record category, which we started in early 2011,” he noted, adding that in prior years IGFA has averaged about 700 applications of all types. A mountainous task, that by all means is no one-man show. Vitek, together with president Rob Kramer and conservation director Jason Schratwieser, comprise IGFA’s World Records Committee. They are responsible for reviewing every application for accuracy and compliance with the organization’s International Angling Rules, as well as approving all records.

Although many applications are submitted by anglers who were not actively seeking world records at the time of the catch, surprisingly only about 5 percent of applications received are rejected for violating IGFA rules. Vitek is quick to note that applicants should not be intimidated by the process, and IGFA’s staff is eager to help when asked. “Often an applicant is not familiar with the process, and they’ll call or send an email and say, ‘These are the things I have, what else do I need?’ and I’ll tell them if they don’t have this or that, it’s not worth their time and expense to file because without these items, unfortunately, we won’t be able to approve the record.”

Another common example for application rejection is when the leader and/or double line length limit was exceeded. “Surprisingly, we see applications where the leader or double line is submitted and the length of each is well over what’s allowed,” says Vitek. “We see a lot of that with freshwater application rejections simply because saltwater rules allow for a fair amount of leader and double line whereas freshwater rules allow significantly less of each,” he added, noting if anglers took the time to understand the rules before they wet a line, they’d be less likely to have an application rejected. Other less frequent rejections occur because the applicant exceeded the time limit to apply or lacked of a photograph of the fish or scale.

Scale certification is also a frequent reason for rejection, and although IGFA is not required to certify the scale used during the weighing process, it does provide that service for portable scales for its members. “As long as the scale has been certified by a reputable business or agency within the past year, and that information is provided on the application, that’s fine,” notes Vitek, while adding the scale can be certified after the fish is weighed, but that’s not recommended. “It’s okay to have the scale certified as soon as possible after weighing the fish, though the problem with doing so is, should you apply for a record and the scale doesn’t pass certification, the record will be denied after you’ve gone through all the work to apply.”

Photos can be the most important part in the filing process and the more, the better, simply because they help document the catch. Some of the most important photos are those taken during the fight. Today, video is becoming increasingly popular, and that media can also be submitted to document the catch and events surrounding it. IGFA does require angler and witness testimony in a notarized statement to verify what took place during the catch of the fish to validate that the Angling Rules were not violated, and video of the entire catch can help document this statement. “Sometimes, with our Junior Angler Records, we’ll get Small Fry applications for records with fish of several hundred pounds or more, which we know grown anglers would have trouble landing, or applications that will indicate the angler moved the 80-pound bent-butt rod from the rod holder to the fighting chair without assistance,” says Vitek. “Video can verify the entire process, and as much as viewing it can be time consuming, it’s worthwhile for us to see it and make sure all rules were followed.” Though not required for record approval, a photo of the fish on the scale with the weight clearly visible is also a big help. When this is not possible, at a minimum the photo of the scale displaying the fish’s weight is preferred. Additional photos worth including are those of the fish freshly caught in full color. Digital format is always preferred over print photos and printed copies or copies printed on a standard desktop printer on ordinary paper are discouraged. Photos of tackle including rod and reel can also help the approval process as well.

Species identification is also vital, and Vitek notes that’s not often as easy as it sounds, especially when dealing with some sub-species or rare fish caught in remote locations of the globe. It’s up to the angler to provide clear photographs of the species applied for, and if the photos are not clear enough for IGFA to identify the fish, an applicant can provide documentation from an ichthyologist who can verify the species. “If I’m unable to identify the species during the record filing process, we have a wide variety of data to reference in-house, including our staff biologist,” he noted, while adding that IGFA also has a group of scientists and ichthyologists who can analyze the photos based on the species and location of the catch. “That being said, we have rejected record applications because we couldn’t identify the species.”

Additionally, species identification is important when filing for IGFA’s Special Clubs Program as well. “For our Royal Slam and Grand Slam clubs, we’ve recently begun requesting photographs of every catch for billfish to verify the species is indeed what’s being applied for,” says Vitek. “We’re putting our name and logo on these certificates and our president adds his signature, so we need to be confident when we issue a certificate that the data was accurate and the catch was legitimate,” he added, noting the photos avoid an embarrassing situation down the road. “In the past we’d hear people say ‘I’m going to be the fastest person to catch a Royal Slam,’ and that accomplishment would draw a lot of media attention in the sportfishing community. They’d then read a person caught the slam and one of the species was caught in a highly unlikely location, and we’d ask for photos and the fish turns out to be a different species.”

The Mobile App 1.68 from IGFA keeps you connected whether you’re aboard the boat, in the car, on the beach or in your living room. Click on the World Records to check the records of your favorite species. Press Species ID and you can search every species from A to Z where you’ll find a color illustration and description of the fish as well as fish which may be similar. You can also locate the closest IGFA Certified Marina or Certified Captain or check the International Angling Rules. Press FAQ to answer a variety of common questions with regard to record filing, angling rules and scale certification among others. You can also set up a Quest List while the My Catches section allows you to create your own fishing log and include a photo, catch details, weight, length, girth and catch time and date and upload the information to email or Facebook. The GPS function of your iPhone will automatically insert the location your fish was caught. For more information visit the iPhone App Store or IGFA.

The approval process includes several phases and involves the aforementioned World Record Committee. Included in these steps are line testing, photographic evidence review, scale certification and measurement of the leader, double line, fly line, tippet and leader, depending on the record applied for. Also included is a review of the testimonials from the angler and witnesses and seal of the notary public or that of another government official in areas where a notary public may not be available. Once the record package is received at IGFA Headquarters, an ID number is assigned to the application package and it is brought to Vitek for review. An inventory is then taken to be sure all the necessary support items, including line and leader samples and photographs, are included in the package. Testimony of angler and witnesses is then reviewed, and line, double-line and leader are then measured to be sure each falls within the Angling Rules and record application sample length requirements. The line sample is then tested utilizing IGFA’s own 5543 Instron tensile testing machine to make sure it breaks within the limits of the record being applied for. A wet-test method is used, where all line samples are soaked in water two hours prior to testing. This test is repeated five times and the average breaking point of the line is what’s used to determine its breaking strength. The package then moves on to the conservation director for an additional review of the application and support materials. From there it’s forwarded to the president’s office for a final review and approval. While many record applications flow through the process without a hitch, often the committee will meet to discuss an application and its surrounding circumstances, and the approval process may take longer than the applicant would like.

“We put the same amount of effort into someone applying for a bluegill world record as we do for a blue marlin record, simply because we want to be sure the catch is legitimate and the support material is credible and in order,” notes Vitek.

Finally, although an IGFA world record certificate bears the name of the angler, it goes without saying the accomplishment is indeed often a crew effort. The angler and captain and mate, when utilized, each play a vital part in securing the catch and verifying the record. Having each know their part in the process and understanding the rules prior to, during and after the fish is caught can ensure that the approval process will go smoothly.