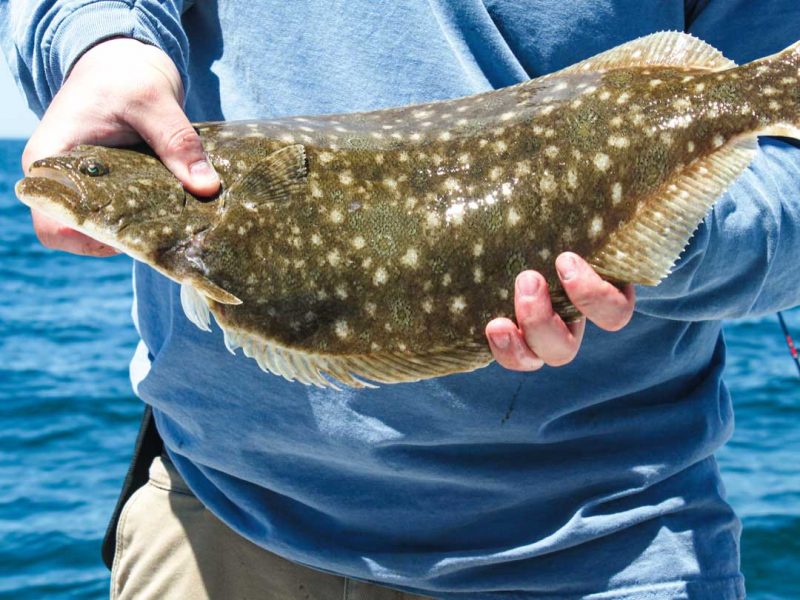 Pickins’ are slim for salty flyrodders in warmer months. Mornings when the flood tide reaches the marsh just as day breaks can provide solid schoolie action, but it quickly fades. To keep catching as the sun climbs, anglers should look to an unconventional fly-rod quarry: the fluke.

Many fly anglers have caught fluke by accident, but few target them. This is a mistake. These flatfish provide excellent sport on days when sun and heat send other predators scurrying for refuge in the deep. I have caught summer flounder in water as shallow as a foot, even in August, and have plucked flatties right from the water’s edge as my kid frolicked in the waves a few feet away. A fluke’s compressed shape lets it lie in the slightest of depressions and ambush bait as it passes overhead, so having a shallower water column above it only serves to keep prey closer.

Finding subtle structure is the key to catching fluke on the fly. Using conventional gear, search for spots where depth changes significantly, such as gradients of 10 feet or better. But fly tackle is better suited to fishing depths of 15 feet or less, so look for much smaller changes.

Fortunately, it doesn’t take a huge depression to hide a fish that’s only a couple of inches thick. Fluke lie undetected on the down-tide side of the smallest humps, easily lingering in the resultant current break and gobbling up any morsel unfortunate enough to be swept overhead. Some of my favorite spots barely register on my sonar.

Boating anglers should look for shallow flats adjacent to deeper water. One of my best spots is a 6-foot-deep flat just off the edge of a deeper channel. I find fish here on just about every stage of the tide, but they seem to be most active at slack. Because you often can’t rely on your electronics to find subtle pieces of structure, take careful note of where you get a bite and concentrate your efforts over the most productive stretches, even though this may mean frequently repositioning the boat. Use the Man Overboard button, or take land ranges, to ensure you repeat drifts over the most productive sections. Mark waypoints on the best spots, and take notes about wind direction and tide so you can return later.

Drifts of just under one knot are ideal when using fly tackle for fluke because the current forces the thicker fly line upward. While conventional anglers curse days in which the wind and tide go against each other, these can be blessings for fly fishers. Use a drift sock (or even a five-gallon bucket tied to a midship cleat) to further slow your progress on windy days. Cast up-current from the direction of your drift, giving the line plenty of time to settle before you reach what you expect to be productive ground. You won’t be actively retrieving the line; instead, move the rod tip to impart some action to the fly.

Though you’ve probably never thought about it, fluke employ a lot of the same strategies as stripers and blues. I’ve caught many of them on the edges of marsh drains as the tide drops, the same place you’d find schoolies. Like stripers, they orient themselves into the current and gorge themselves on the all-they-can-eat buffet that occurs when the tide flushes out the marsh. I position the boat parallel to the marsh edge and cast up into the creek, letting the tide bounce my fly back to me. This is also a way for kayak anglers to score by being able to sneak further up into skinny water.

Wider tidal creeks and rivers are great places for wading anglers. The best time to fish is whenever you can get out, but the outgoing tide is going to be the most productive. The departing waters provide a torrent of bait that fluke and other predators can’t resist. Fish these just as you would a trout stream, casting up-current and letting the flow work your fly back past you. Use a sinking line to keep the fly within a couple feet of the bottom (its heaviness depends on how fast the water is moving). I avoid using weighted flies when fishing a sweep like this because they often tend to get hung up. I do use a fly with a bit of foam to lift it off the bottom if I’ve given too many to Davy Jones.

Fluke sometimes abandon their usual lie-in-wait tactics in favor of a more active approach to hunting. Nowhere is this more likely to happen than on a shallow flat during slack tide where they’ll get really shallow chasing down bait. These wide-open expanses are easily waded, which is convenient since you’ll need to cover ground. Because these flats don’t have water rapidly sweeping over them except at the very peak stages, fish won’t be concentrated as they would be near a pinch point like a creek mouth. Instead, they are likely to be spread out over the relatively featureless sand or mud bottom, meaning you’ll have to do some casting to connect. Toss your fly out ahead of you in a fan pattern, slowly hopping it back.

Beach anglers should look for the same structure that holds bass and blues. Changes in depth of only a foot can be a big deal on sand beaches, and you can pull a couple of fish from these small depressions. Offshore bars hold fluke both alongside and on top, so work them thoroughly.

Jetties can also be excellent spots, but the strong currents often require a heavy line to get down. Be warned: sharp rocks can do a number on lines if you’re not careful.
If you can’t identify any structure, just keep casting and moving until you hook up.

Though fluke put up pretty good tussles, they’ll probably never take you to the backing. Any fly rod you use in salt water will have enough backbone to handle these fish, but the rod may not be able to handle the lines needed to get a fly to them. So, rod selection is more a product of the water depth you will be fishing than the species you are pursuing.

To consistently hook fluke, the fly must be within a foot or two of bottom. You can accomplish this with a floating line in waist-deep water, and you can reliably fish with a sink tip in depths to about 6 feet. But to reach deeper water, and stay there, full-sink lines are ideal. To really get down, use the fastest, heaviest line your rod can handle (which is the driving force behind choosing a heavier rod weight). If you are fishing depths of 6 feet or less, a 6-weight is ideal. It’s when you try to probe 20-foot depths that you should use a 10-weight with line that sinks 6 or 7 inches per second. As a healthy compromise, an 8-weight with a few spare spools loaded with intermediate, sink-tip, and full-sinking line (from 4 to 6 inches per second) will cover all the bases.

While a sealed-drag reel with the ability to stop a fully loaded Freightliner is always a good idea in the salt, it’s not necessary here. Just about any reel will do the trick, so just use what you already have or pick up a simple model that won’t corrode in salt water. Leader selection is also simple: I usually just run a straight trace of 10- to 20-pound fluorocarbon off my line. You’ll have to play with leader length to compensate for water depth and the sink rate of your fly line, so be ready to experiment.

The old adage of “match the hatch” is a good place to start, but with fluke, it’s more important that your fly gets down to them than what it looks like. Fluke love sand eels, so flies that imitate that profile, like Clouser Minnows or Jiggies, are usually effective. Squid are often found around sand eels and offer fluke a larger morsel, so throwing squid patterns can score with larger fish that have keyed in on the bigger baits. Sometimes, fluke will be after larger baits, like peanut bunker. When they’re on larger-profile baits, look to patterns such as Deceivers or Cowen’s Magnum Baitfish.
You probably already have everything you need to chase fluke with the fly rod, so why not pursue a familiar species in a new way?