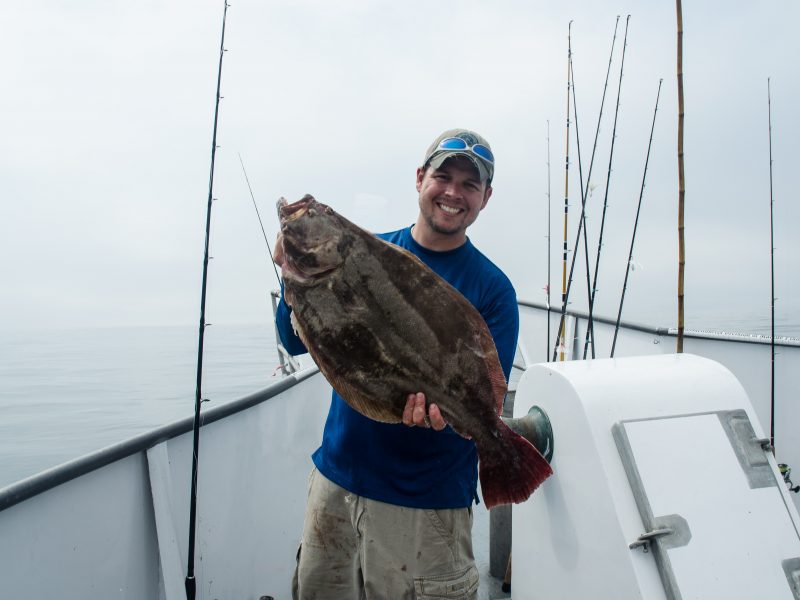 Nantucket Shoals is home to the best fluke fishing in the Northeast.

Mate! Gaff!” came the excited call from the stern of the Helen H. I was in the process of swapping out to a heavier sinker for my second drop to the bottom, so I wandered down from my position at the starboard bow. I arrived just in time to see first mate Matt sink the gaff into what looked like a mottled-brown manhole cover with fins. “You’d better get in the water,” Matt said to me as he tossed the monster fluke into a cooler. I hustled back to my spot on the rail and dropped my rig into the best fluke-fishing waters in the Northeast.

Nantucket Shoals is a vast area of shallow and constantly shifting bottom that extends 23 miles east and 40 miles southeast from Nantucket. Depths in this area can change from 100 feet to 5 feet over the length of a football field, creating tidal rips and breaking waves that have given the area its reputation as a ship graveyard. However, the same conditions that make Nantucket Shoals hazardous for boaters provide incredible habitat for gamefish. The sandy shoals concentrate baitfish, such as squid and sand eels, and fluke, bluefish, sharks, and even bluefin tuna move in to feed.

I learned of the fluke fishing on Nantucket Shoals while on a tilefish trip aboard the Viking Starship out of Montauk, New York. Captain Bobby Schroeder was describing some of the trips the Viking Fleet makes throughout the year, among them a multiple-day fluke-fishing trip to Nantucket Shoals. I could hardly believe that a headboat on the eastern tip of Long Island, so close to the legendary fishing grounds of Montauk, the North Fork, and even Block Island, would steam more than 100 miles east…for fluke!

“It’s worth it,” Schroeder assured me. “You don’t catch those numbers of big fluke anywhere else. Not even in Montauk.”

After getting back to my home on Cape Cod, I saw that the Helen H out of Hyannis also runs trips to Nantucket Shoals, and booked a trip that summer. 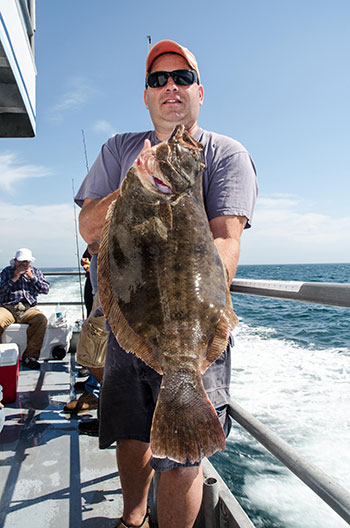 The crew of the Helen H would later classify that offshore fluke trip, the last of the 2014 season for the boat, as a slow one, despite the fact that the whole boat had nearly limited out on fluke. An influx of cold water had brought with it a plague of spiny dogfish, which made fishing the deeper drops—where the doormats hold—impossible. After two drifts and dozens of spiny dogfish double-headers, Captain Joe Huckemeyer headed for shallower water, where the bottom seemed to be paved with keeper fluke. On my ride home from Hyannis that day, I called my oldest fishing buddy, Jerry Sullivan, and described the “slow” trip—from the easy limit of fluke to the pool winner that weighed “only” 8 pounds—and we made plans for the following year. On that next trip, we got a taste of how good Nantucket Shoals fluke fishing can be.

During his 7-hour drive north the following August, Jerry passed the artificial reefs of New Jersey, the Ambrose Channel, Montauk, Block Island and dozens more big fluke hotspots between South Jersey and Massachusetts. When we pulled into the Helen H parking lot, we saw that most of the anglers booked on the one-day offshore trip had made a similar journey—New Jersey and New York license plates outnumbered Massachusetts plates three to one.

With calm winds and seas, the run to Nantucket Shoals from Hyannis took about two hours. After passing the fertile fishing grounds of Nantucket Sound, the bait- and fish-filled waters off Sankaty Light, and the rips off Monomoy, Captain Joe Huckemeyer motored another hour south before setting up for the first drift.

With flatfish fanatics from New Jersey, New York, Rhode Island, and Massachusetts on board, every fluke rig imaginable was put into action. Spin-n-Glo rigs, tapdancer rigs, popcorn rigs, and simple but effective three-way rigs were lowered to the bottom on our first drift. Most fishermen quickly discovered, as I did, that the ripping full moon tides called for a little extra lead. Once everyone swapped out to 20-ounce bank sinkers, the catching began.

I missed my first hit, but Jerry didn’t miss his, and as Captain Joe motored around for the second drift, a 7-pounder was tail-beating in Jerry’s cooler.

Jerry added a big sea bass and a 5-pound fluke to his cooler before I hooked up for the first time. My fish looked small next to an 8-pounder waiting for the gaff nearby, so I swung it over the rail and placed it next to the ruler stuck to the handrail. Twenty inches—and that would be my smallest of the day.

The average size of the fluke was incredible, but as you might expect, the improvement in quality over my previous trip came at the cost of quantity. While the shallow water on top of the shoals produced smaller (but almost all still keeper) fluke on every drop for almost everyone on board, in the deeper water, perhaps 5 to 10 anglers hooked up on each drift.

Short drifts are the order of the day on Nantucket Shoals. The abrupt depth changes and strong currents mean that lines may be in only 10 to 15 minutes at a time before resetting is necessary. It makes for a busy day for the captain and crew, but the great fishing makes the effort worthwhile.

There was no magic rig or bait that day. Jerry and I each filled our 5-fish limit, and while all of my fish came on strips of fresh mackerel (caught at the Cape Cod Canal the night before), all of Jerry’s came on small, whole squid. Fishermen caught fluke on everything from spearing and squid strips to whole snapper blues. One theme was clear, however: The fresher your bait, the more bites you had.

Fishermen who stuck with jigs caught fish as well. I’d abandoned the technique early in the trip because the fierce full moon tides made it difficult to hold bottom and resulted in several tangles, but regretted it when I learned that the 12.4-pound pool winner struck a Spro Bucktail.

It’s wise to bring at least two different setups for a day of fishing on Nantucket Shoals. The night before my second trip on the Helen H, I tossed my heavy tautog/cod setup into the car. When my 10-ounce sinker scoped way out on the first drift, I was grateful I had that stout conventional when the mates suggested we bump up to 20. On slower tides, or in the shallower part of the shoals, lighter outfits work better for bouncing bucktails.

For lead, bank and cannonball sinkers between 6 and 20 ounces will cover any depths and drift conditions you might encounter. For jigging, bring bucktails from 4 to 8 ounces, and don’t forget the Berkley Gulp to tip your jig and the teaser hook above it.

The rig employed was far less important than making sure a fresh piece of bait was fluttering off the hook. Standard three-way rigs dressed up with squid skirts were the most popular aboard the Helen H, but other rigs also caught fish.

Nantucket Shoals is a huge and potentially dangerous area, so most of the anglers who fish there do so aboard a charter or headboat, rather than their own private vessels. Leaving the boat handling to the professionals is not only safer, it will cut down on the time required to find the hotspots out of miles and miles of water.

If you do venture out to Nantucket Shoals on your own vessel, keep in mind that the shoals constantly change and move, and most charts don’t show the true nature of the bottom contour. Use your head and avoid the whitewater on top of the shoals while watching your depthfinder for the deep holes where big fluke concentrate.