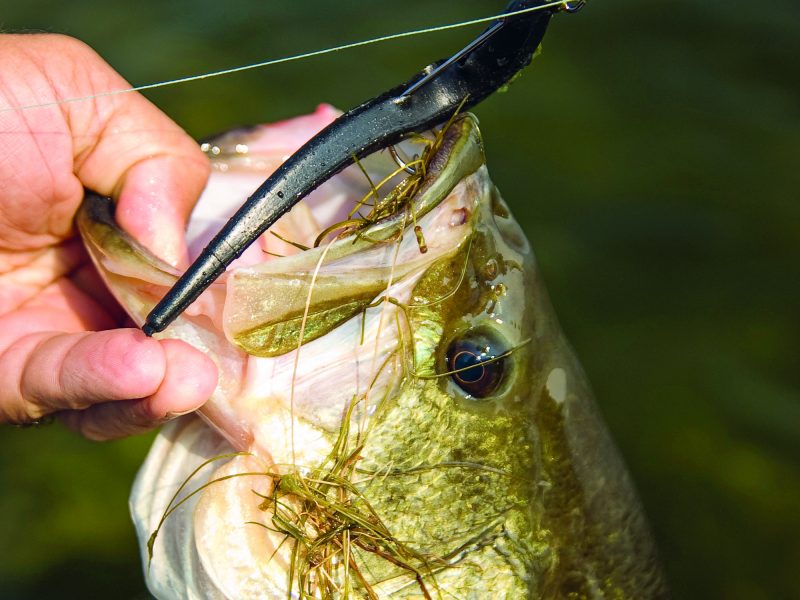 Sunrise. A calm lake. A jerk shad splashes down on the surface. It slides to the side, turns, and glides the opposite way. The baitfish lookalike continues its subsurface side-to-side skating a few feet, then loses momentum, noses down, and slowly begins sinking at a gentle angle.

It does not get far. A pack of smallmouth bass rocket up from the depths. The fastest one wins, overtaking the falling fluke. Hookset. Game on! For years, a jerk shad has been one of my top baits for smallmouth and largemouth bass, in part, I believe, because it has a natural, gliding action. It, along with other baits that skate and slide, has an uncanny ability to trigger bites, even in tough conditions.

The Concise Oxford English Dictionary’s definition of glide, applicable to bass baits, is to “move with a smooth, quiet, continuous motion.” This type of gliding movement must appear natural to bass. Consider the swim of an unflustered frog. It kicks its legs, then coasts on its momentum before kicking again. A crayfish flicks its tail, rising off the bottom before gliding further along as it slides back down to the floor. An unthreatened minnow kicks its tail, then coasts along. These are just a few examples of how prey slides and glides through the water.

A bait can glide two ways. It can slide along a horizontal axis, such as a surface lure dancing back and forth with a walk-the-dog action. A bait can also glide along a vertical axis, like the slow, sliding sink of a finesse jig. A lure’s weight, shape, and buoyancy influence its gliding action. Below are several reliable gliding presentations for catching bass from the surface to the bottom.

Every angler should own a walk-the-dog-style topwater. This lure skates side to side, covering a large patch of water with plenty of surface disturbance. The commotion draws out largemouth from deep cover, attracts bass from far and wide on a flat, and makes basin smallmouth rise from the depths.

A topwater is great during calm, overcast days. I learned years ago, however, that bass will also smash a walking topwater during choppy conditions. Big bass love eating these surface baits when the wind is blowing and waves are rolling.

As far as retrieves go, a steady walk-the-dog action regularly stimulates strikes. Adding a pause is effective at taunting a fish to attack.

When bass follow but don’t commit (or swipe and miss), leave the bait still for a few seconds, which mimics stunned prey and often coaxes them back. If that trick fails, try increasing the length of the pause between each downward rod snap, which causes the lure to glide to one side and then make a hard turn the other way while limiting its forward movement. This sliding-on-the-spot move keeps the bait in the strike zone. Trying it with a hollow body frog is great for getting comeback strikes from largemouth holding in lily pads and slop. It is equally potent for hooking smallmouth from lake basins and flats with a cigar-shaped topwater and certain poppers.

Segmented, hard-bodied glidebaits, a subcategory of swimbaits, continue to be a hot trend on the bass scene. Their hinged designs give these baits unique, snaking, S-motions.

The 5¼-inch Megabass I Slide 135 and the 4¾-inch River2Sea 120 are examples of modestly sized glidebaits suitable for catching northern bass. Tournament angler and Megabass Pro Nick Cousvis has fished the Megabass I Slide 135 extensively. As a newer bait with a distinct action, he believes it helps him catch pressured bass that aren’t yet accustomed to glidebaits. Cousvis says a glidebait excels in shallow water. It can still be effective in 10 to 20 feet, but he explains that this requires a longer countdown and slower retrieve. “The glidebait for smallmouth works best when the water gets a little dirtier. Wind is key. It blows on shore and turns up sand and debris.”

Cousvis works windswept shorelines, points, flats, and outside weedlines. The lure’s sizeable profile and wide stride makes it easier for smallmouth to locate than a smaller bait in turbid conditions. Moreover, reduced visibility does not allow a smallmouth to scrutinize the bait and is another reason Cousvis believes bass eagerly strike glidebaits when it is windy.

While Cousvis’ smallmouth glidebait tactics involve covering water with long casts, which requires a 7-foot, 11-inch casting rod (see sidebar), to launch the 1-ounce bait, his largemouth program is more target-focused. The I Slide’s natural swimming action is used to draw out largemouth from cover. He works the bait around docks, beside downed trees on steep banks, and over the top of deep vegetation.

For such a scenario, Cousvis deploys a slow, steady retrieve but is constantly imparting small changes. These include pauses, a twitch or two, and occasionally reeling faster for three or four cranks.

“Speed changes are what trigger the most bites,” Cousvis said. “Every time you change it, it does something different. I tend to get more bites when I do everything in a very controlled fashion. The slack is more controlled and when I twitch it, the line is taut.”

One-piece, oval hard baits, like the Rapala X-Rap Subwalk and Sebile Stick Shadd, are another style of subsurface glider. These slow-sinking or suspending baits move similarly to their topwater cousins, delivering a hard-angled, walk-the-dog action when twitched. Rod pulls or reeling retrieves make the lures travel in more forward trajectories with some belly rolls and less pronounced side-to-side actions.

These long-casting baits are excellent for covering water. When bass don’t want to put their snouts above the surface to eat a topwater, these lures can be golden.