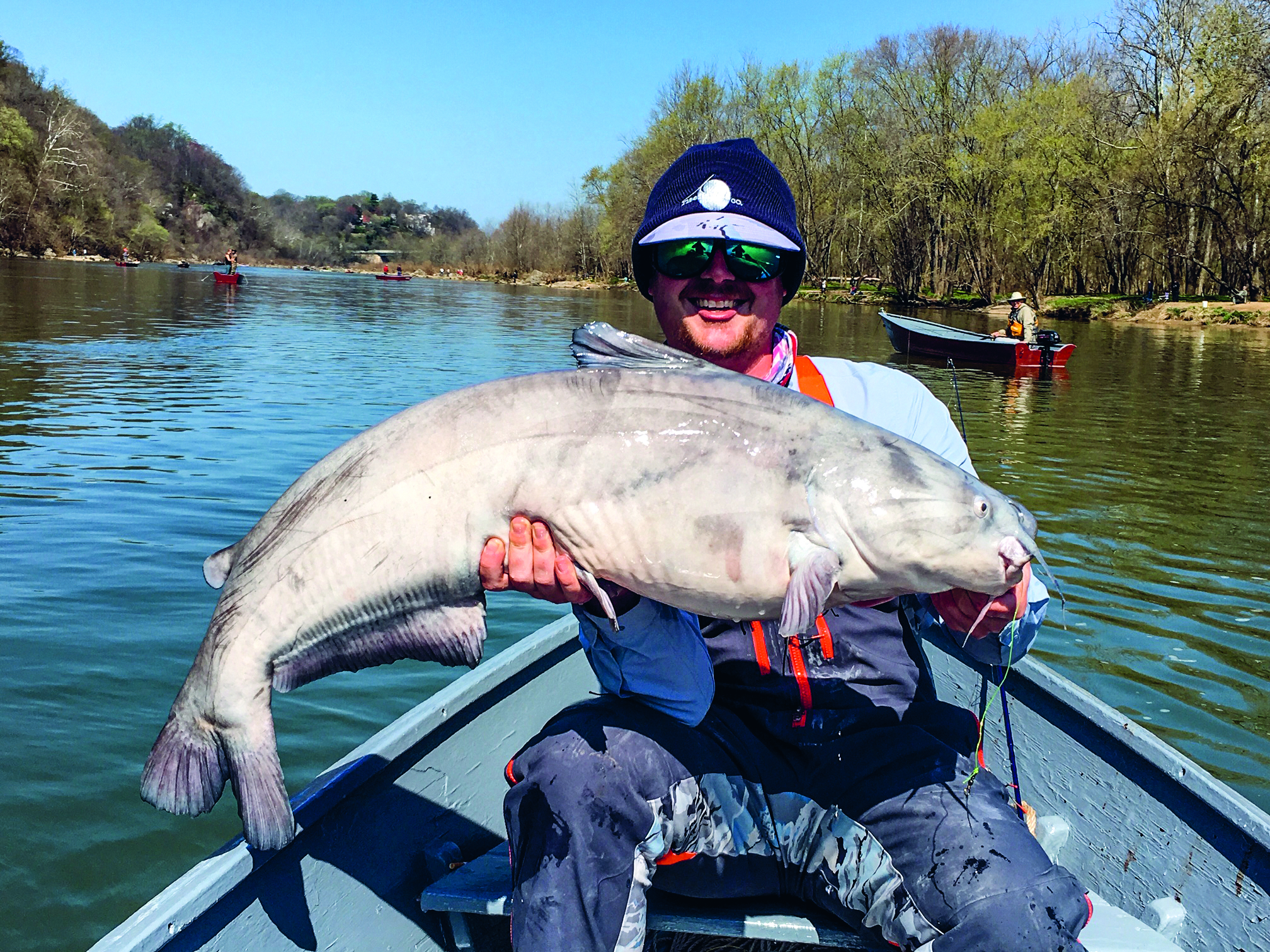 I’ve always been obsessed with catching big fish. I live for catching big fish. In fact, if I don’t have a legitimate shot at catching a 20- to 30-pound something every time I go out, I’d rather stay home.
While my friends targeted trout on opening day, you’d find me in the tailwaters of the stream trying to catch carp. When we went for bass, I’d fish for catfish. My friends even nicknamed me “Catfish.”
When I was 10 years old, I saw a magazine article with an angler holding a giant blue catfish and it nearly blew my mind. I spent much of my teens and twenties searching for big catfish in New Jersey, but the smaller channel cats just weren’t cutting it. My catfish dreams eventually faded, and my fishing endeavors turned to muskie, carp and saltwater species, though I never lost my love of catfish.

New Jersey has a fast-growing population of invasive flatheads in the Delaware River, but navigating the river or finding shore access can be tricky. Plus, flatheads bite best after dark and I prefer to stay off the water at night because of my poor vision. Instead, in the last 20 years, I’ve taken many road trips to see family or friends south of the Mason-Dixon, where big-cat country begins. I’ve always had a rod handy and have fished for catfish in Virginia, West Virginia, North Carolina, South Carolina, Tennessee, Alabama and Mississippi. However, despite my best efforts, I wound up with only a few small flatheads and some decent-sized channels.

Then, a few years ago, my father-in-law moved to a DC suburb in Virginia, about a half-hour from Little Falls, which is the begin- ning of the tidal section of the Potomac. Since I always plan a day of fishing on every trip, I began to research the area. It didn’t take long to uncover the massive amount of information online about the burgeoning blue cat fishery in the Potomac. I researched obses- sively until I found the right area, called a local shop for some key knowledge, pinned down a precise shore spot on Google Maps, and planned to catch my first blue cat.

No matter how much I plan and prepare for something new, it’s always somewhat of a surprise when I succeed. Although I had only a few hours to fish that first day, I caught my first and second blue cats and missed a few run-offs. The bigger of the two was 15 pounds, the largest catfish I had ever caught. The next time, fishing from the same spot, I broke the 25-pound mark.

After that, I knew I had to get on a boat. There are a few rental places on the Potomac that rent rowboats without motors, so I brought down an electric transom-mount engine, batteries, anchor, and fishfinder on the next visit to my father-in-law’s. Two friends who lived in the area joined me for the adventure. It took us a few hours to figure things out, but we ended-up catching nearly 20 blue cats up to 30 pounds. I had rediscovered my love of catfish, and knew I needed to bring my own boat down to DC.

With an outboard motor, better sonar with a Navionics chip, more room and more gear, I figured I could really put a hurt on the catfish— and I was right. After a friend had to cancel on our planned adventure, I decided to persevere and made the trip by myself.

It was late August, when blue cat fishing is supposed to be slow. Despite that, I landed nearly 30 fish, many over 20 pounds, and missed another two-dozen run-offs. The kicker fish came at the end of the day and pinned a 50-pound scale—it was a personal best, and a trophy blue cat by anyone’s standards. All my trips since have had similar results, and while 50-pound fish are not easy to come by, the numbers are always good, and a few 30-pounders come aboard every time out.

LAY OF THE LAND

The 405-mile-long Potomac River turns into big water before dumping into the Chesapeake Bay, but its upper tidal limits are calm, serene, and easily manageable in my 14-foot aluminum V-hull. In fact, the entire river above the Arlington Memorial Bridge is a no-wake zone. This area is almost entirely within the DC limits, with Virginia on the opposing shore. Several DC monuments can be seen from the river, including the Washington Monument, the Lincoln Memorial, the Kennedy Center and historic Georgetown University.

The tidal section of the river extends upstream from DC proper to Little Falls at Chain Bridge, which is about 4.5 miles from the start of the no-wake zone at the Arlington Memorial Bridge. Incidentally, this section has some of the deepest holes in the entire river system. Several 60- to 80-foot holes hold good numbers of blue cats, big and small, year-round. This is where I fish, almost exclusively.

Catfish gear does not need to be fancy, but it has to be strong. Since you’ll sometimes need to use 6 ounces of lead or more, conventional gear is a must. I prefer a composite rod over fiberglass or graphite because a composite combines the moderate action of fiberglass to plant hooks while add- ing carefully placed graphite for sensitivity and fish-fighting power. When bait-fishing on anchor, I employ the 9-foot, 6-inch Whisker Seeker Tackle Chad Ferguson Series rods. These allow for long casts that keep lines farther from the boat when fishing multiple rods.

Strong conventional reels with loud clickers are best-suited for catfishing. Any smaller-mod- el saltwater reel will work, but my preference is the Shimano Tekota 500. These reels have a moderate price tag and will last a lifetime in fresh water if you take care of them.

Spool your reels with a minimum of 65-pound-test braided line (preferably 80), and attach a 3-foot section of 50-pound-test monofilament or fluorocarbon shock leader with an FG or Slim Beauty knot. The shock leader will provide better abrasion resistance than the braid and greatly reduce break-offs on rocks and other structure.

For bait-fishing on anchor, a simple slip-sink- er rig is all that’s needed. This setup consists of a 3- to 6-ounce “no roll” sinker slipped onto the
shock leader, followed by bead, a heavy-duty barrel swivel, 50-pound leader and strong 8/0 to 10/0 circle hook. If you’re a quantity over quality angler, and want to mess with dozens of smaller catfish, use a smaller hook. If you’re looking for the big one, stick with the 10/0.

If you talk to any hardened catfish angler, they’ll tell you the most important part of being successful is having the right bait. The majority will also tell you that fresh bait al- ways out-fishes frozen. The tidal Potomac has a year-round population of gizzard shad, and that is the main food source for big blue cats. In a perfect world, you’d be able to launch your boat, load up on fresh gizzard shad with a cast net, and go fishing. However, if you’re just starting to learn the Potomac, chances are that is not going to happen, and you’d be silly to leave New Jersey without bait.

The river gets runs of shad and herring, and bunker also come upstream during the year, all of which blue cats are accustomed to eating. My best success has come when I am able to get fresh bunker from a bait shop in New Jersey. It should be a day or two old, at most, and I keep it packed on ice until I go fishing. After November, it can be tough to get fresh bait, so this is when I resort to using frozen bunker, preferably from a tackle shop that vacuum- seals them. I’ve only used frozen bunker in colder water, but it still catches plenty of fish.

I do some drift-fishing on occasion, but my most productive fishing happens while an- chored. If you’re just starting to learn to fish for cats on the Potomac, anchoring is less complicated and your best bet. With an aver- age depth of 15 feet or so, the handful of 40- to 80-foot holes in the tidal Potomac in DC are magnets for blue catfish. A Navionics chip in your sonar unit will do wonders not only for finding the hole, but also for identifying the drop-offs and ledges around it.

Cat fish do not just sit on the bottom. On any given day, they will be roaming the drop-offs at different depths while looking for food. This is where a quality sonar (or better yet, an imag- ing sonar) will help you identify bait and marks so you’re not sitting in dead water. You should never fish the same spot for 15 minutes without a bite; small adjustments of just 50 yards can take you from catching nothing to consistent action. 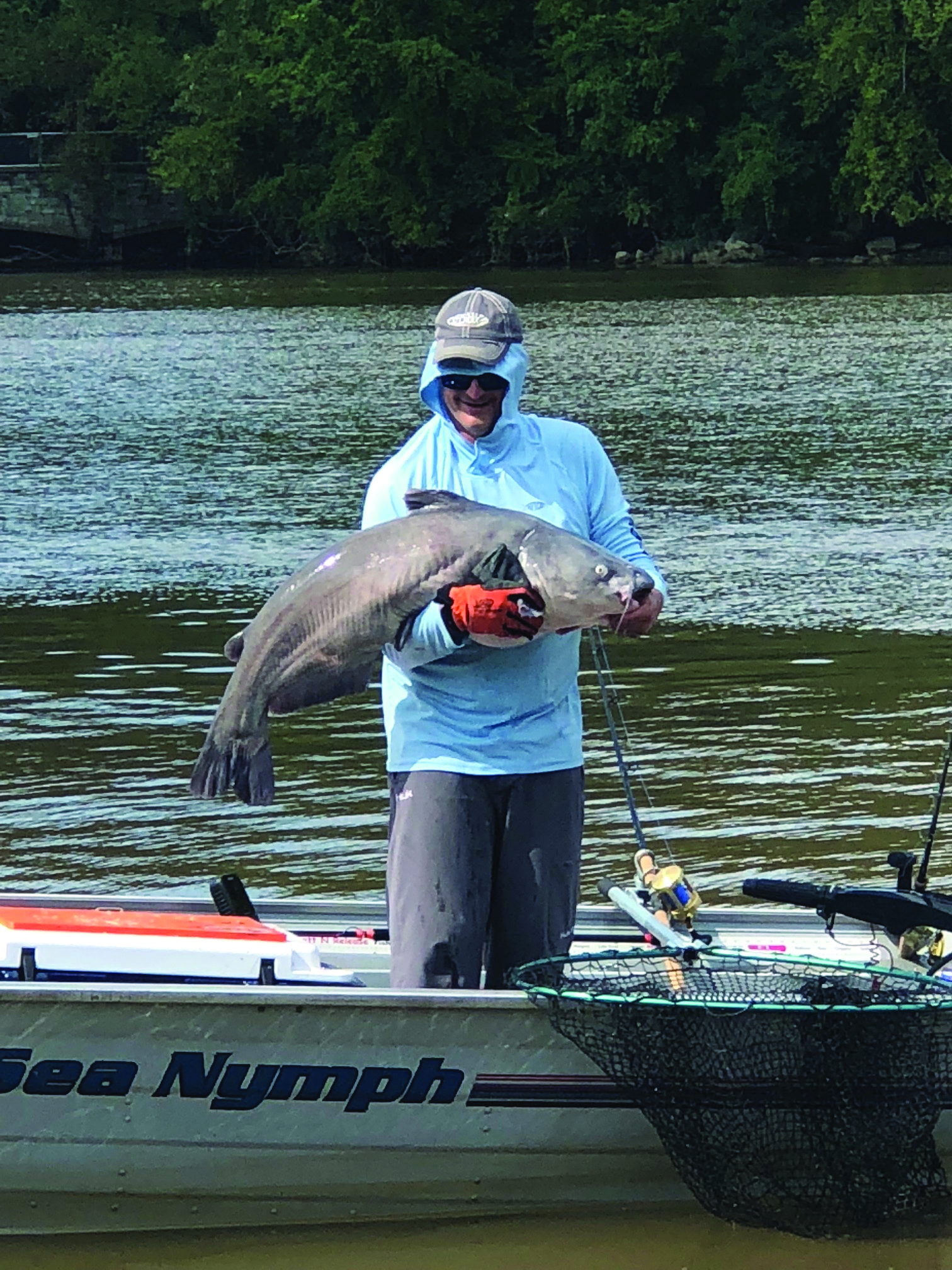 Any depression of 10 feet or more from the surrounding bottom depth, especially larger holes, are worth dropping anchor. Idle around the area while scanning with your sonar for bait and marks before deciding on a location. Depending on underwater currents, blue cats can be almost anywhere in a hole, but it’s always best to try the current side first. If you keep your anchor line short, you can always drop back by letting out more line without having to pick up the anchor.

I sit in the back and set one rod holder off each side of the boat. If I have a friend, I put two more in the front, one on each side, and we fish four rods. More than two rods per person can be tricky because doubles are common, and even triples aren’t farfetched. You can either cast your baits or drop them right below the boat. Set your drag down fairly tight and keep the reels locked up when you put them in the holders. With big circle hooks and flex from composite rods, the fish will hook themselves. You’ll see little bumps and taps from smaller fish, but when the right one takes the bait, your rod will bend completely in half. That’s the one you want.