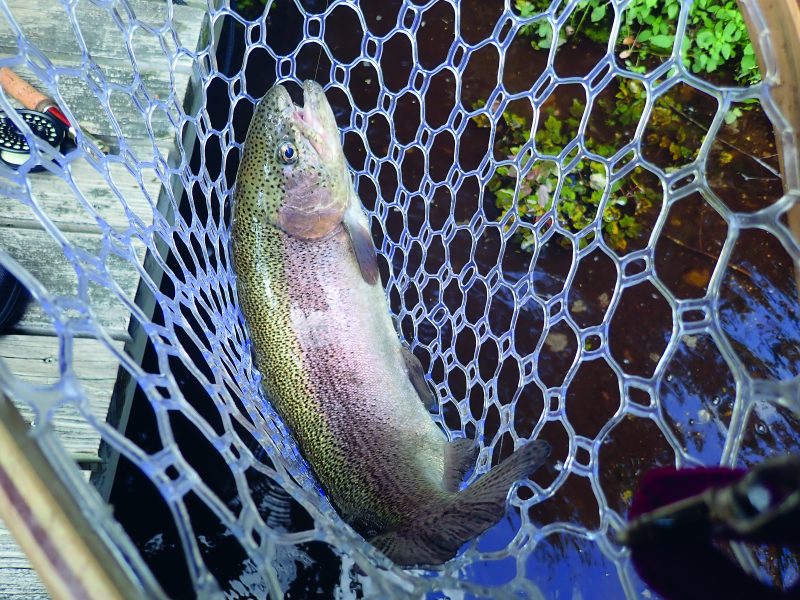 I couldn’t help but giggle as the rod bent deep into the cork. I was tight to the fifth or sixth rainbow of the morning, and this one was doing her best to put some river between us. She went airborne a handful of times, forcing me to bow to her, as I would a tarpon, to spare the 5x tippet. By keeping the rod tip low and letting the reel’s drag apply gentle but constant pressure, I tired the big trout out enough to slowly regain line. Eventually, I slid the net under the 20-inch ‘bow.

It was my first trip back to Connetquot River State Park Preserve since the outbreak of Infectious Pancreatic Necrosis, also known as IPN, in the early 2000s. Though the disease is common in some regions, this was the first time it had struck any hatchery in New York. The hatchery drew and discharged water back into the river at the time, so production had to be stopped to prevent further spread of the disease into the river and potentially into Great South Bay at the river’s southern terminus. State law forbid introducing IPN-positive fish into any waterway after the start of 2009, so all the broodstock were released into the river in the fall of 2008.

Connetquot River State Park Preserve started life as the South Side Sportsmen’s Club. Only 40 miles from Manhattan, the club’s land served as a playground for New York City’s wealthy sportsmen. It was loaded with ducks, deer and, thanks to the on-site hatchery, trout. In 1963, the club was sold to New York State for 6.2 million dollars, though the South Side Sportsmen leased the land back for a decade. In August 1973, the grounds officially became a New York State Park, and were opened to the public for the first time. To extend further protection to the unspoiled grounds, the New York State Legislature designated it a State Park Preserve on August 7, 1978. Currently, the Connetquot River is recognized as a Wild, Scenic Recreational River despite flowing through some of the most densely packed suburbs in the United States.

In its heyday, fishing at Connetquot was so hot that it drew international renown. These days, a spot can become famous with a single viral Instagram post, but in the pre-internet world, a location had to fish exceptionally well for word to spread. And spread it did, with the “Conny” drawing anglers from all over the United States and abroad. Anglers often slept in their cars just to get a chance at scoring one of the more coveted beats on the first-come, first-served public water. It was was so well known that the proprietor of an Irish pub in the heart of Paris asked me how “The Park” was fishing when he heard my New York accent. I had similar exchanges with fly shop employees up and down the East coast every time I stopped in to buy a license.

But, predictably, the quality of the fishery dropped off with the hatchery’s closing. Without a steady influx of reared fish, catch rates dropped significantly. The spring creek lost a fair number of fish to the area’s healthy osprey population, and more ventured out to the brine, never to be seen again. Within a few short years, fishing here was a shadow of its former self. Fortunately for suburban trout aficionados, a new hatchery would once again restore the Connetquot to glory.

Sampling efforts conducted by the NYS Department of Environmental Conservation have shown no signs of IPN since 2009. With the clean bill of health, plans were laid to open a new hatchery. The new facility would draw its water from a well, not the river itself, to prevent spreading disease from the hatch house to the wild should it ever show up again. To facilitate the installation of a well with flow sufficient to handle the demands of an aquaculture operation, two groups of concerned anglers, the Idle Hour Fishing Club and Friends of the Connetquot, raised money and obtained grants.

If my recent visits have been any indication, the river is once again teeming with fish, holding sizeable rainbow, brown, and brook trout. The headwaters of the river begin as a small spring, known as Connetquot Brook. As a spring creek, the average temperature is about 52 degrees, which keeps the fishing fairly consistent year-round. As the river flows south, it gains width and becomes the Connetquot River. The lower reaches are estuarine in nature, and water levels are influenced by the tides. Fish do make it to the lower reaches, and catching a “salter” that has spent a season or two in the brine is not unheard of.

Angling in the park is limited to fly gear. The average size of these fish demands that you leave the 3-weight at home, with a 5-weight being ideal. The preponderance of streamside bushes and overhead vegetation makes a shorter rod, in the neighborhood of seven feet, a good choice. Casts tend to be short and big, technical mends aren’t necessary, so the abbreviated length isn’t a hindrance. I like glass rods because they load well with the short lengths of line needed, and they tend to absorb the shock of the big fish you’ll encounter here.

The river is shallow, so a floating line will cover all techniques. Double taper lines are ideal for short casts, but weight forward lines also work well. Though these fish aren’t as picky as chalk stream browns, the angling pressure they receive warrants the use of a fine tippet. I tend to rig up with a 9-foot or longer 5x leader, though that means that I have to be careful when applying pressure. You can get away with shorter and heavier for nymphs and streamers. For assistance with tackle selection, Paul at River Bay Outfitters in Baldwin has been fishing the Conny for decades and set you up with everything you need.

All the common aquatic insects in the Northeast are found in the Connetquot, so the same selection of flies you might take the Catskills will be successful here. You can’t set your watch to the hatches as you can on some rivers, but they happen regularly enough to keep dry-fly purists happy. The river is home to a variety of darters, so tuck a few small streamers such as Black or Grey Ghosts and a venerable Woolly Bugger in your box as well. Whatever flies you pack, they must be barbless.

Trico (the smallest mayfly) hatches are a common occurrence from March to October, so keep some diminutive dries in sizes 20 to 26 handy. Choose patterns like the Hi-Vis Trico Spinner or Indicator Parachute to make seeing the minuscule fly easier, but the fluorescent post may spook some fish; instead, tie on a Krystal Spinner or Trico Spinner when a more subtle approach is needed. And, if you see a rise in the vicinity of your fly, set the hook just in case.

Perhaps the most enjoyable hatch on the Conny is when blue wing olives come off the water from mid-April through October. In sizes 16 to 20, these dries won’t test your vision like tricos will. Any of the traditional BWO imitations work, with my favorites being Blue Wing Olive Thorax, Sparkle Dun BWO, and extended body Blue Wing Olive patterns. When the fish don’t seem to be breaking the surface and are snubbing your offerings, try using a soft hackle emerger like the Soft Emerger BWO.

Though less frequent in my experience, the caddis hatch from April through September is also worth mentioning. Simple elk hair caddis patterns work, as can smaller Humpies, and a selection of caddis nymphs is also handy. Midge nymphs in sizes 20 to 28 and scud patterns can save the day if nothing is visible. Fish these in a dry/dropper rig to make detecting subtle bites easier.

Possibly due to their hatchery lineage, I’ve had great success with foam ant patterns in brown, even outside the traditional terrestrial period of late summer. Perhaps the round foam cylinder that makes up the body looks like the pellets they were fed in the hatchery tanks? The Perdigon nymph is similarly effective, likely for the same reason. 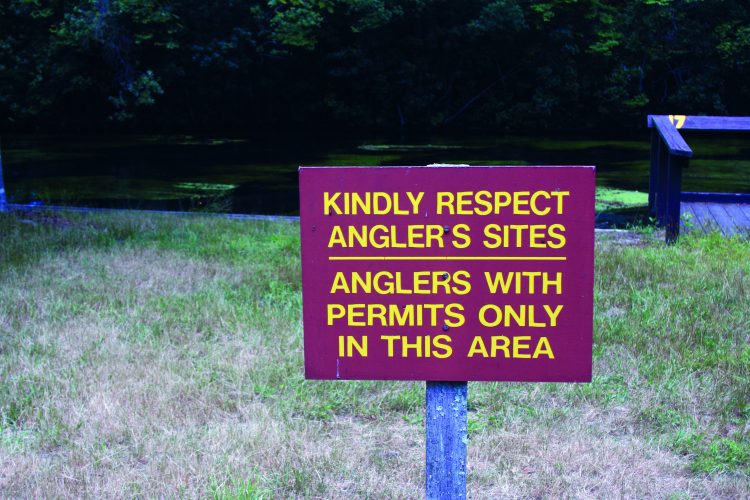 Fishing in Connetquot River State Park Preserve is done via a beat system, with 30 stream and pond sites available. Beats are available twice a day, from 8 am to 12 pm and 12 pm to 4 pm, Tuesdays through Sundays. An additional session is available from 4 pm to sunset from April through September. Sites are issued on a first-come, first-served basis on reservation day. (Reservations can be made by calling 631-581-1005.) A valid New York State freshwater fishing license is required, as is a $25 fee for each four-hour session fished. Catch and release is encouraged, but you may keep two fish ranging in size from 10 to 13 inches, though you must cease fishing when you add that second fish to your bag.