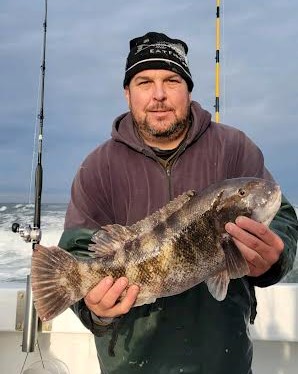 It’s January at the Jersey Shore, not a time known for abundant fishing opportunities.

Challenging weather and closed seasons have many anglers putting their gear away to await fairer days. Bait and tackle shops shorten their hours or close altogether to replace inventory or take a break before spring arrives.

Still, there are blackfish to be caught, some stripers in the surf and freshwater options to explore.

Just a few reminders as we head into the new year. Striped bass fishing in rivers and bays is closed until March 15, black sea bass is closed until mid-May, the limit on blackfish is now four until the end of February and it’s time to sign up for the New Jersey Saltwater Registry for 2023.

Mark at Tackle World in Rochelle Park said he’s received fair reports on the blackfishing and heard that stripers were still being caught on the beaches down around Atlantic City. He didn’t have much to report on freshwater as the ice that anglers were hoping for didn’t materialize.


Capt. Phil Sciortino at the Tackle Box in Hazlet said there’s not much going on with the exception of blackfishing and a few surfcasters trying for January stripers. He said there are birds working off the beaches, but there haven’t been any reports of bass in the bait. The Tackle Box will be participating in Striper Day on January 15 on Long Island and getting ready for its big pre-season sale on February 4.

Mike Gleason at TAK Waterman in Long Branch said it’s quiet there with freshwater fishing in local ponds and lakes providing most of the action. Gleason said he got a nice largemouth earlier this week and there’s been a good crappie bite. The shop is now on winter hours, open every day except Tuesday.

Bob Matthews at Fisherman’s Den in Belmar reported that the blackfish bite has been from fair to good for the Big Mohawk, Capt. Cal II and the Ocean Explorer out of the marina. The fish range from shorts to over 10 pounds. Surf fishing, he said, has about wound down for most anglers but a few are still trying with limited success. Matthews said the overall consensus from most anglers is that it was a great striped bass season and a better-than-average fluke season. Tuna fishing was good as well, he added, but not up to the bite of 2021. He said he’s looking forward to the upcoming tackle shows and flea markets including Surf Day at Brookdale Community College on Feb. 18 and the Asbury Park Fishing Show on March 19 at the Berkeley Oceanfront Hotel.

Capt. Steve Spinelli on the Skylarker out of Belmar said the blackfishing has been middling with some days betters than others. The daily pool fish has been between 6 and 8 pounds.

Lloyd Bailey at The Reel Seat in Brielle said there’s not a whole lot going on right now but his colleague, Jimbo, at the shop had a good tog trip at an undisclosed spot late last week. He and two fellow anglers got a three-man limit and then played catch and release. Jimbo said every tog over 8 pounds, and there were a few, was released.

Kyle Tanger at Fishermen’s Supply in Point Pleasant Beach had good reports on blackfishing this week. The Axel Carlson Reef was a hot spot with three friends of his getting a boat limit then catching and releasing dozens more. Tanger believes the private boaters have an edge over the party boat anglers when it comes to tog in that fewer sinkers or jigs drop on a piece all at once. Don’t give up on surfcasting just yet, Tanger advises, as there are still stripers hanging close to the jetties. The fish aren’t big, he said, but they’re around and hitting 4-inch shads. Finally, he said, the freshwater action has been good for those giving it a try. Trout, pan fish and largemouth bass have all been biting in local lakes, ponds and streams.

Capt. Kenny Namowitz on the Mimi VI out of Point Pleasant Beach said the tog continue to bite. The better anglers, he added, are putting more fish in the box.  Two such toggers were out on Tuesday with John Stanley catching the pool fish and Bob Dolci getting his limit and then some. The Mimi VI is now running special limited open boat tog trips on Tuesdays and Fridays. There’s a 15-angler limit with the boat leaving at 6 a.m. and includes green and white crabs for $130. Other days will offer limited crowds departing at 6:30 a.m. for $110 with green crabs included.

Chris Parlow at Captain Bill’s Landing in Point Pleasant Beach reported that a brief weather window opened last week and allowed for offshore trips. Those that made it to the Hudson Canyon found a decent tuna bite, he said. He added that local boaters reported a good week of tog fishing. Captain Bill’s is now closed until spring arrives.

Capt. Danny Gregory on the Norma K III out of Point Pleasant Beach said he’s running Saturday and Monday marathon tog trips from 6:30 a.m. to 4:30 p.m. He was heading south on those extended trips but is now finding better fishing closer to home. The Norma K will continue to sail for blackfish from 7:30 a.m.to 2:30 p.m. on the other days of the week.

Frank Giacalone at Gabriel Tackle Co. in Brick reported that they are now operating on winter hours, open Tuesday through Friday from 9 a.m. to 5 p.m. and Saturday and Sunday 8 a.m. to 4 p.m.  The shop is closed this weekend as the Gabriel staff will be down at the Wildwood Boating and Fishing Expo.

Pete Kupper at Charlie’s Bait and Tackle in Normandy Beach said he had reports of stripers in the surf at Lavallette last weekend. Not a lot of fish were caught but the folks that were there managed to pick a few. There were plenty more caught in the Toms River last Saturday, Kupper said, when stripers corralled bait in a stretch of water and shore anglers had all the action they wanted.

Jenni Ackerman at Grumpy’s Bait and Tackle in Seaside Park said she, shop owner Ray Kerico and co-worker Sean Smida had a good tog trip aboard the Dauntless on Tuesday. The trio crushed the blackfish, she said, and Kerico won the pool with an 8-pounder. Ackerman said there are still stripers being caught in the surf on sand eel imitations with Avas a popular choice.

With the closure of black sea bass and inshore striper seasons there isn’t much to fish for except blackfish and freshwater species. The togging has been up and down but there have been some nice fish caught with the Axel Carlson Reef and Shrewsbury Rocks producing.

The better reports are coming from local streams, ponds and lakes with largemouth bass, crappie and trout being caught.