Happy New Year, New York! With the holidays and the semi-recent closing of the black sea bass, tautog and striped bass seasons, we put Long Island fishing reports on a temporary hold. However, bi-weekly or monthly check-ins and reports will continue through the winter until we resume our specific, weekly reports upon the revival of the saltwater season.

Generally, after the closing of the striper, sea bass and blackfish seasons, fishing gets tough on Long Island. Trout fishing in the rivers has been good with intermittent rains increasing flow levels, creating favorable conditions for fly fishermen on the Connetquot and Nissequogue rivers, in particular. The stocked trout ponds around central Long Island are also giving up a few fish here and there, but pickerel have been active as well. The ponds that seem to be performing best are connected to river systems. The Mill River, the Carll’s River, the Carman’s River and the Peconic River all have moving, accessible water with connected ponds that will give up some good chain pickerel, largemouth bass, crappie and trout. These are the usual freshwater suspects that keep us busy during the saltwater off season, but there are a couple other desirable options for sweet water anglers who are looking for abundance and adventure.


Before we dive in: It’s a new year, and it is worth noting that a freshwater fishing license in New York is $25, while the saltwater/marine registration is free. Don’t be a silly goose and get fined for not having a license to catch and release trout, of all things. It is well worth the $25 fee to stay fishing all year long.

We’ll start with white perch fishing, which has gotten exponentially better in some of the inland marinas and tidal portions of rivers over the past few weeks. Chumming with grass shrimp has been paramount in order to produce a bite, but once they’re chewing, small hair jigs, curly-tail grubs, spoons and anything else that resembles a minuscule baitfish or grass shrimp will get bit. 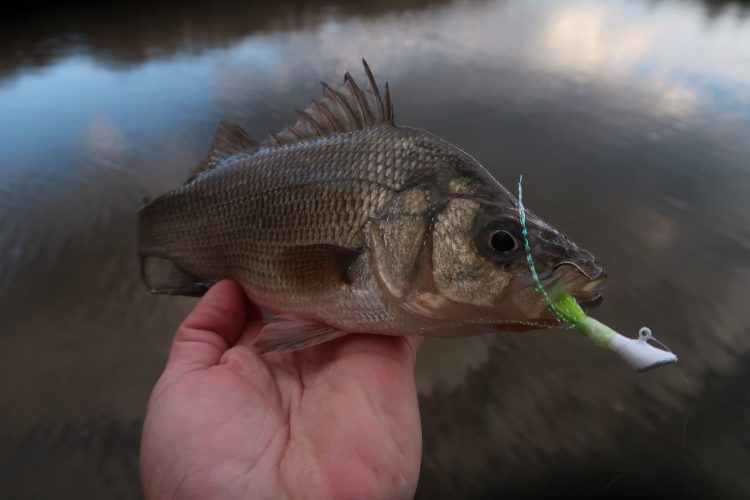 If you have the luxury of fishing for perch from a boat or kayak, a small lipless crankbait like the Rapala Rippin’ Rap will also perform well. While white perch can be caught in freshwater too, in places like Lake Ronkonkoma, they will be much smaller and harder to find. If you plan on keeping any white perch for the table, definitely steer clear of freshwater perch and focus your efforts on lower tidal segments of rivers that drain into southern bays.

For surfcasters who are not interested in white perch fishing, nighttime largemouth bass fishing in mild temperatures is a great way to keep the juices flowing during the off season. Not only do bass bite well at night, but you’re more likely to stick a big one. Much like stripers, they are opportunistic feeders that will use the cover of darkness to capitalize on filling the caloric deficit that comes with the stagnancy of winter in freshwater. Big swimbaits and slow-moving wake baits will still get bit in areas that transition from deep to shallow, as these are the ambush points that bass will use to feed at night; ledges provide them the freedom to feed briefly in shallow water, and return to deep-water cover for protection. That being said, small offerings are just as likely to get bit this time of year. Ned rigs, spoons and mid-size suspending jerkbaits are all worth throwing in bass waters.

During the mid- to late-winter, another favorite freshwater species of mine becomes active in shallow water. Walleye, a “Long Island exotic”, are a fun and challenging shore fishing target, especially for the night shift surfcaster who is looking to feed their urge to fish in the dark. Walleye are only available in a couple water bodies on Long Island, both of which are in Suffolk County. I’ll leave you to figure out where.

These large members of the perch family have remarkably keen eyesight, and due to their habit of coming shallow to feed on vulnerable baitfish at night, a little more shoreline stealth is necessary for success. No headlamps allowed. They tend to enjoy soft-plastic paddltails that resemble juvenile white perch, one of their main sources of forage on the two ponds, but lipless crankbaits, jerkbaits and small topwater poppers will also do the trick. That bite will improve as the winter progresses, but it’s never too soon to go out and pry the shorelines for a couple overzealous winter walleye. After all, with temperatures in the forties recently, it is unlikely that we’ll be seeing ice any time soon.

Other than freshwater fishing, there isn’t much to be said about the few boats between Manhattan and Montauk that are still going out for cod, porgies and pollock. Especially on the East End, many of our tackle shops are temporarily closed or lacking reports, which is typical for winter; but you can get out there and make a report for them! To get a better idea of the bite this week, here is the breakdown from some available charters and tackle shops:

Captain Vinnie of Karen Ann Charters in Jamaica Bay reports that striped bass fishing is going strong up north, where he is currently guiding catch-and-release trips on the Housatonic River. Many of Connecticut’s rivers fish well for winter holdover striped bass, and Vinnie is guiding strictly from shore with light tackle and soft plastic jigs. Give him a call (516)728-6952 to book a trip with him and get in on the action.

“We will now be sailing special offshore wreck trips for jumbo porgies, weakfish, pollock and hopefully some cod! Sea bass season is closed and any caught will be released. We plan to sail Saturday 1/7 and Sunday 1/8, and we will also be adding some 6am local cod trips very soon! To reserve ahead, call the office (516) 607-3004 or go to superhawkfishing.com.”

“Freshwater fishing is where it’s at right now. The local ponds are giving up trout and pickerel, and there are a few guys out there bait fishing for carp. If we keep seeing warm water, largemouth bass fishing might pick up, but trout fishing is prime right now. There have also been rumblings of good white perch fishing in our area, so stock up on the small soft plastics and jigs to get in on the action.”

“With this warm spell, the ponds opened up to some good fishing. The pickerel fishing in particular is fantastic, so if you’re fishing the ponds, that should be your number 1 target. White perch are also around, but you have to hit the right tide to get them unless you’re using bait. On the trout front, I guided on the Connetquot earlier this week; it was insane fishing. We had some really nice-sized, eager fish that were more than willing to eat our flies. I think the water is warmer than the air! After a few hours, my client had hooked over 30 fish and landed at least 15. For details on guided trips: call the shop or go to the website– just make sure you have your freshwater fishing license first!”

“White perch are showing up in good numbers on the south shore, and chumming with live grass shrimp is a must if you want the best chance at them. Before the New Year, there was also steady fishing for porgies and weakfish on some nearby deadbeats, so if you’re planning a trip, now might be the time to consider hopping on board.”

This month, keep a watchful eye on weather patterns and fronts as they heavily influence the productivity of freshwater fishing. With open water on the lakes and ponds, fish on the incoming and outgoing ends of storms when the pressure is rising or falling. If you have an iPhone, the weather app can provide insight into atmospheric pressure levels; the changes in pressure drive fish to feed as they prepare for a change in their environment.

If I’m on the water this month, I’m mainly fishing for pickerel or trout, with the occasional white perch or largemouth bass trip in the mix. If you’re looking to switch things up, try night fishing for bass or walleye, assuming conditions allow. Keep in mind the transition areas between shallow and deep pockets that bass favor during the colder months. Deep water is necessary for survival when it’s cold, but after some days of mild weather, those bass will be looking for a meal in shallow waters and ambush zones, leaving them more susceptible to being duped by a lure.

For trout fishing on the ponds, the calmer water is usually alluring to shore fishermen, but I implore you to fish the wind-blown shoreline. It may be slightly difficult to cast, but the trout are far more likely to find vulnerable bait in shallow, slightly choppy conditions, and the cloudier water might even make them less line shy.

White perch, though elusive, sound like they are finally showing up in numbers. There are good reports of perch in the salt ponds and rivers on the North and South Forks, but until last week, there were little to no sign of them in the typical west end haunts. Fish inland on the rivers where there is still moving, tidal water; the brackish areas are where white perch thrive and as long as there is some moving water and bait, your chances of finding a school are much higher. Avoid sunny days. These guys are more likely to bite in cloudy, cold and overcast conditions, much like striped bass.

Lastly, if you’re on western L.I. or in NYC, don’t forget you have the NYC Reservoirs available to you. There’s a unique permit to fish there that can be acquired online, which can open you up to a world of shoreline brown and lake trout fishing that helped me (and many other anglers with cabin fever) escape the bore of a sedentary winter. On the reservoirs, cover ground and hike to remote waters where you can cast and jig for substantial smallmouth bass, yellow perch, lakers and more.

Feel free to reach out to me on social media @hefftyfishing, I am more than happy to answer any questions that will help people find fish during these challenging times.

Wherever your fishing takes you this week, respect each other, respect the fish, be safe and fish hard. We’ll check in again soon. The clock is ticking, time to go catch that first fish of 2023. Happy New Year!