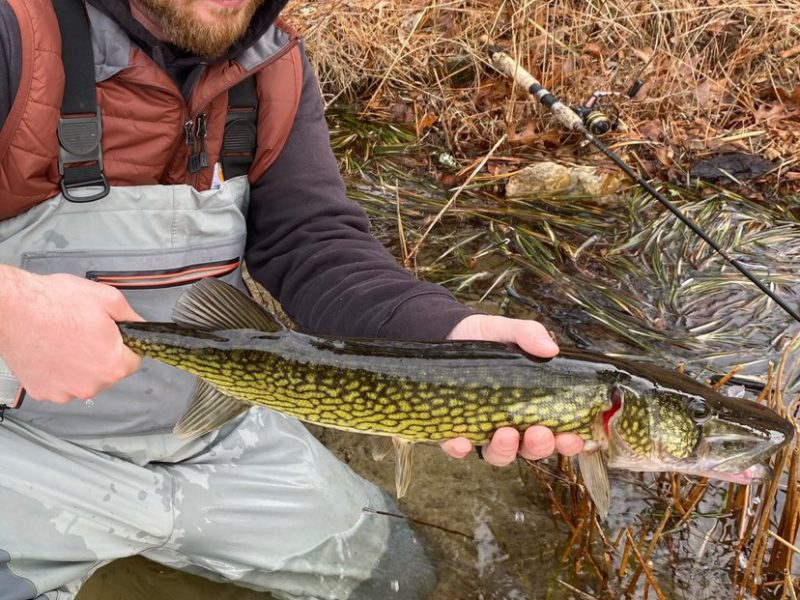 Happy New Year, Cape Cod! As refreshing as the recent, unseasonably mild air temperatures have been, fifty degrees kind of feels uncomfortable for early January. But, we fish through the hand we’re dealt, and freshwater fishing has been great recently.

If you read last week’s report, we had just come off a storm and a cold snap that threw a wrench in most people’s fishing plans, mine included. We covered what was biting this time last year, including big chain pickerel and smallmouth bass, but this week, trout fishing has been the hot bite.


After last Thursday’s lunch break blitz of rainbow trout, I couldn’t help but share the bite with a few coworkers. So last Friday, I set out to the same spot with Adam Eldridge, Jim Fee and Mike Carlson with cameras in hopes that the bite would last. It became quickly apparent that we would not be disappointed. The trout were still piled into one corner to take advantage of abundant juvenile herring in the wind blown cove of the pond. They were trying to escape the lake to retreat to the sea, as anadromous fish do, but a natural dam of leaves, sticks and debris had blocked off the herring run which lead to a full day-long feast for the trout.

Hair jigs and spoons tricked the trout in choppy conditions, and we enjoyed probably the most productive trout fishing I have ever experienced from shore in such a short amount of time. The conditions lined up perfectly to create this feeding opportunity, and although I don’t typically find it productive to fish in the wind for trout, I sure will be doing more of it in the future. To read more about the conditions and factors that led to this bite, read our account of the freshwater blitz in “Surfcasting” for Trout.

Trout fishing isn’t the only option with open water and mild temperatures. Chain pickerel and largemouth bass tend to take advantage of temperature swings and pressure changes between rain showers and storm fronts. Last January, my first fish of the year was a largemouth, and my second fish (that same day) of 2022 was a massive chain pickerel; oddly enough, that pattern continued in 2023. The pickerel were smaller, but they were chewing well on Monday afternoon alongside some largemouth bass. They were keyed in on my spoon, while the largemouth bass were focused on jerkbaits of their own kind.

The bass were eating, but they were a bit more hesitant than the pickerel, and frankly, my goal that day was to catch a 20-inch plus fish like my 25-inch pickerel from January 2, 2022. I got fish close to 20 inches, but nothing more.

Pickerel do love shiny lures, that’s for sure; but I think that attraction is heightened in ponds like this one, which receives a herring run. Much like the trout, those juvenile herring feed pickerel like this all winter long. If you can find a school of those baitfish, there will likely be some predators hanging on the outskirts of the school. Cast around weeds, grasses, ledges/drop-offs and clearings, and try slow, steady and fast retrieves.

My buddy Ryan, who fishes further out on the Cape around Hyannis and Yarmouth, dialed into a gator pickerel bite in early 2023. Ryan has been getting them on jerkbaits consistently, and the pickerel have some good size to them. Suspending and slow-rising jerkbaits are your best bet, but lipless crankbaits will also get the job done (and could land you some bass, too).

If there were 3 essential lures to use during the winter months, they are suspending jerkbaits, spoons and hair jigs. With these three in your tackle box, you can cover the entire water column and effectively present a few different lure sizes and styles at various depths and speeds that are likely to get bit by bass, pickerel and trout.

On Martha’s Vineyard, Stavros Viglas gives us his report from the water this past week:

“2023 has started off with warm weather and open water on the Vineyard. Winter holdover striped bass show no signs of slowing down. White perch fishing has been very good, even during the day with these warm air temperatures. This week, the guys at Cape Cod Offshore and several other boats have gone out for tuna with no luck, but they have seen plenty of bait. Freshwater bass and pickerel are still biting in the ponds, which is great for taking the kids out to bend a line. Trout ponds are also very active with the warmer temperatures this week. One angler even had them coming up for dry fly’s. Time to explore after the past storm, and definitely bring a rod.”

For a better idea of what may be biting in your area, here’s the scoop from a few of our local shops:

“Clamming is awesome right now, we have been selling a ton of gear on that front. It is good to see people still getting out and being active on the water even in the winter. On the fishing front, this week we weighed a 3-pound, 10-ounce tiger trout at the shop that was caught from a pond in Plymouth. At that weight, we helped the angler submit the catch for a Pin from the Massachusetts Sportfishing Awards Program. The trout fishing has been good so far this winter, and it should continue to keep shore anglers entertained as long as the mild weather continues.”

Evan at Eastman’s Sport and Tackle in Falmouth reports:

“We’re closed for a national fishing show this week, but prior to that we had been hearing of a lot of good clamming around Falmouth from people coming in for gear like insulated waders and rakes. There have also been improved reports of trout fishing in our local ponds, with most of the success coming on spoons, and a few fish being caught on Powerbait rigs fished on bottom. There were rumblings of good white perch fishing too. Should the temperatures remain in the forties, we’ll see an uptick in bass activity to follow the recent jump in pickerel action.”

“We’re selling a ton of trout worms this week after the ponds opened up last week. Trout fishing has been very good, and the anglers not using worms are catching on in-line spinners or Kastmaster spoons. We’re getting reports of lots of yellow perch, too—mostly from the crowd fishing with nightcrawlers or Powerbait. Other than trout, we have been slammed with people buying shellfishing gear! We got a new shipment of the elbow gloves, and we have plenty of rakes and baskets to go along with them. If freshwater fishing is not your thing, but chowder is, come grab the gear you need to get started!”

Enjoy the “warm” weather while it lasts! Freshwater fishing options are plentiful, and with a kayak or small Jon boat, your odds of finding a good body of schooling perch, bass or trout will improve even more.

Pickerel, though they may not school together, will be on the prowl and are far more willing to chase down a fleeing bait than a lethargic largemouth bass. Think lures that are shiny, loud and big enough to be irritable to a large chain pickerel. Even the mid-sized ones put up a decent battle, so it’s wise to use stronger leader than you would for trout, bass or white perch on account of their teeth.

Largemouth and smallmouth bass will be biting on finesse presentations. Suspending jerkbaits are a great option, but when bass are hugging bottom, a ned rig or similar soft plastic will serve as an appetizing offering that requires minimal exertion.

Trout fishing is just about as good as it gets though. Nightcrawlers, spoons, spinners, powerbait, hair jigs and smaller, floating Rapalas have all been landing trout from Cape kettle ponds this week, and it should continue that way. Even in unfavorable conditions, as we have seen, trout will take advantage and feed on resident baitfish populations. If the bite is tough and they are not cooperating, switch lure types. If they were chewing and suddenly stop biting, switch lure colors; sometimes they’ve seen your lure swim by just one too many times. Otherwise, switch up the speed of retrieve. Many times I’ve felt that the trout had moved on, or completely lost interest in my lure, only to slow it down or speed it up and reignite their interest.

Wherever fishing (or shellfishing) finds you this week, respect each other, respect the fish, be safe and fish hard. Happy New Year!