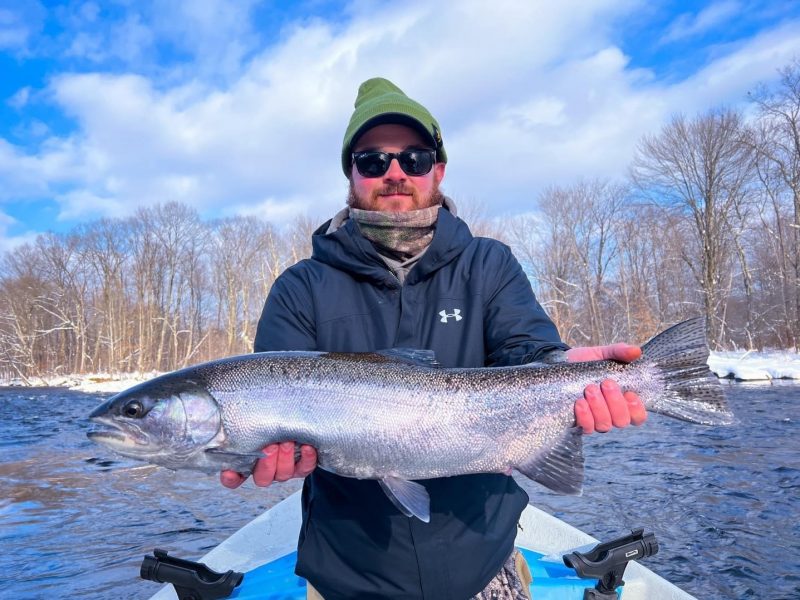 After the storm of a generation that put Christmas on hold for many, it will be a while before anyone can get back fishing in the Niagara River.

Mike Ziehm of Niagara Falls was out last Thursday fishing the day before the storm arrived. The bite was decent, and he landed 2 rainbows in an hour in 4-foot plus visibility depending on where you were on the river. It varied from spot to spot. He landed both fish early in the morning with pink No. 4 spinners. Once it approached around noon or just before, the bite fell right off no matter what bait he used and no matter where he went on the river. He returned to the river Friday at 8 a.m. but at that point the river already started to turn over and it was high and dirty. The big wind and snow change over came in and the visibility quickly changed from 2 feet to zero. It was pure mud with zero visibility by the weekend and into this week. He feels that if he can get a foot of visibility, he can catch trout from shore. He will check the end of the week, but it may be the new year before they are catching fish again.

Captains Connor and Chris Cinelli of Grand Island hit the water with Capt. Ned Librock of Catching Dreams Charters on Thursday before the storm and they started out snapping brown trout off Fort Niagara with Emerald shiners. One thing they noticed was the fish seemed to prefer a shorter leader, as short as 3-4 feet.

After catching browns, they headed upriver for some walleyes but could only catch bass and perch. Yellow perch have been hanging near the sanddocks in Lewiston. When the water clears again, the fish will be hungry!

In Olcott and 18 Mile Creek at Burt Dam, Matt Vogt of Newfane reports that he’s been picking up a few trout the past week out of Fisherman’s Park. Fishing has been good, and Burt Dam has been producing trout on feather jigs.

The ice is starting to set up in Olcott, too, but is not safe. Wilson looks promising but will most likely melt after this coming warm front and rain this week. Vogt’s advice is to wait until January to let the ice set up fully for any hard water anglers.

One hard water angler who has had some success in local farm ponds has been Phil Ptak of Lockport. He was using small jigs with plastics to catch panfish through 4-6 inches of ice. Scott Brauer of Gasport reminds ice anglers to stay safe out there. His top three tips for early ice fishing are: spud, spud, spud; never go alone in case you need each other’s help; and with the way the Ice is building this year, it is very tough to read, with so much wind and current pushing it around. It’s better to give it a few weeks. It is going to get cold again and will have plenty of ice but now is not the time.

A reduced limit on walleye in the lower Niagara River will be going into effect on Jan. 1st – one fish per person. Check out the DEC website at www.dec.ny.gov for details.

The fishing on the Oswego has been challenging as of late. The water is down to 32 degrees and is on the dirty side.  But there has been a steady bite off the high wall.  Running jigs under a slip float or plugs off a side planer are two proven techniques.  Otherwise, we recommend fishing the slow edges along the shore with egg sacs and jigs.

The water on the Salmon River has already been increased ahead of rain.  This will lead to big changes. With the river temperatures hovering right at freezing, the increase in flow will have the steelhead moving to the edges.  We recommend concentrating on the slow seams and inside edges. Egg sacs have been the bait of choice.  White, pink, and blue, being the most consistent colors. Other good baits are pink worms, jigs, and the occasional bead.  When fished under a float these baits have been producing plenty of action. Fly anglers have been finding success running stoneflies in a variety of colors, copper, blue and chartreuse.  An egg sucking leech or woolly bugger in black, or olive has been productive.

In this video Austin, of All Season’s Sports (Tackle Shop) in Pulaski, NY, gives us some Salmon River float fishing steelhead tips for both spinning rods and center pin. More information on Oswego County fishing is available here.Contact info for All Seasons Sports Inc.3733 NY-13,Pulaski, NY 13142(315) 298-6433

“The pilgrimage for Salmon River steelhead is a time-honored tradition once the cool winter temperatures come to Great Lake Ontario’s southeastern shores. After the salmon run, steelhead pour into the river for the winter, feeding and running upstream to spawn in the early spring. Unlike the lake’s salmon, steelhead make multiple spawning runs in their lifetimes. The Salmon River’s steelhead season typically runs November-April, depending on the temperatures and river conditions.During these months, fewer anglers are on the water and fishing pressure diminishes. Early season steelhead are aggressive and voracious as they pack on the pounds to help carry them through the winter. As they run upstream, they are the most fun you can have with a fishing rod in your hand. After spawning in late March and early April, the fish make a 180 degree turn and head downstream to the cooler waters of Lake Ontario. “Drop-back season,” as it’s known, is a wonderful time to be on the river, the fish are hungry and aggressive, chasing down any and all food to regain strength after spawning.”