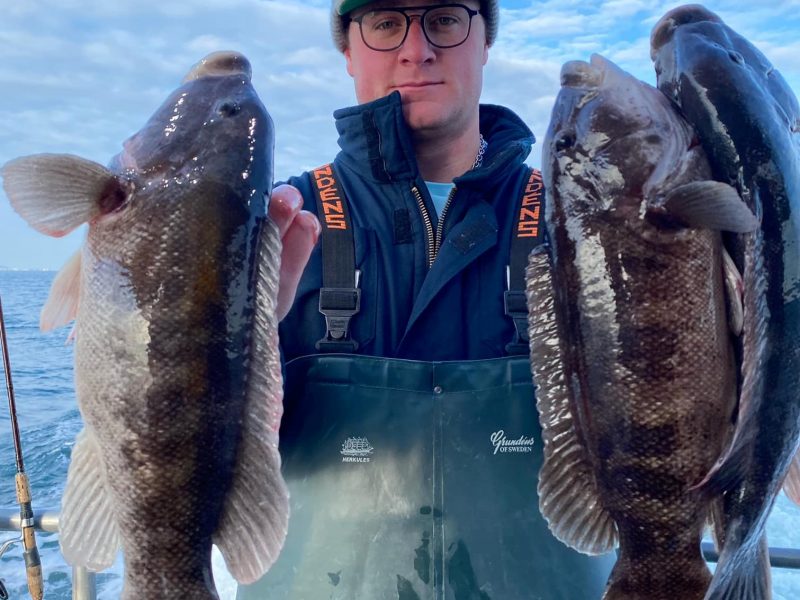 Last weekend’s bomb cyclone lived up to its billing, delivering arctic temperatures, gale force winds and keeping everyone off the water and the beaches.

This week’s moderating weather got the boats back sailing and a few intrepid surfcasters out on the sand.

The blackfish bite has been decent and there have been a few stripers picked in the surf. But, between the holidays and the conditions, there wasn’t a whole lot of people fishing.

Rick Hebert at Tackle World in Rochelle Park said he’s had good reports on offshore sea bass fishing when the boats were able to go. From what he’s heard, the blackfishing has been a bit up and down with the better fishing south of the Manasquan Inlet. The weekend freeze brought ice up north but Hebert doesn’t think it will last with rising temperatures and rain in the forecast.

Capt. Phil Sciortino at the Tackle Box in Hazlet said there were a few anglers casting for bass on the beach with a few fish caught. He did say the Keyport Princess will be sailing for stripers this Friday and Saturday before calling it a season. Sciortino said they will be open all of January and he has a big sale in the works for Feb. 4.

Giglio’s Bait and Tackle in Sea Bright has gone to winter hours and will be open only on Saturdays from 9 a.m. to noon and by appointment.

Mike Gleason at TAK Waterman in Long Branch said it was very quiet there this week with not a whole lot going on. He said the shop will go to winter hours in January, open every day with the exception of Tuesday.

Bob Matthews at Fisherman’s Den in Belmar said the blackfish boats out of the marina, including the Big Mohawk, Ocean Explorer and Capt. Cal II all enjoyed good blackfishing over the last couple of days. Many limits were reported with fish up to 9 pounds. He also said the Golden Eagle had a good offshore trip with sea bass and weakfish. Matthews said the stripers have been quiet on the local front but he had some reports of fish on beaches farther south.

Capt. Steve Spinelli on the Skylarker out of Belmar said he had a good couple of days on the blackfish grounds getting fish up to 8 pounds.

Lloyd Bailey at The Reel Seat in Brielle said with the exception of a few guys chipping away at blackfish, there wasn’t much to report this week. The Reel Seat will be closed on Mondays from January to March, open Tuesday through Saturday 8 a.m. to 6 p.m. and Sunday 8 a.m. to 4 p.m.

Kyle Tanger at Fishermen’s Supply in Point Pleasant Beach said he and two friends had a good day blackfishing on the Axel Carlson Reef on Tuesday, getting a three-man limit with fish up to 8 pounds. Jigs and rigs were both working as were white legger and green crabs. Tanger said being patient paid off as it took a while for the bite to get started but then the hits started coming quickly.

Capt. Kenny Namowitz on the Mimi VI out of Point Pleasant Beach, on the other hand, reported tough blackfishing the last couple of days. Light crowds are finding inconsistent fishing with some days producing a lot of keepers and others not so many. Capt. Namowitz will keep on togging every day through Valentine’s Day.

Capt. Danny Gregory on Norma K III out of Point Pleasant Beach reported that the bite was on and off on Wednesday’s trip with a pick of keepers in with plenty of shorts. The Norma K III will be sailing a three-quarter day trip on Friday and a 12-hour trip on Saturday. Reservations are recommended for the 12-hour trip.

Pete Kupper at Charlie’s Bait and Tackle in Normandy Beach said it’s been quiet there with not a lot going on. He said a few guys are picking a striper here and there, mostly in the back of Barnegat Bay. A lot of the anglers he knows have packed their gear away for the season. He’ll be closing up the shop around the third week in January and will reopen at the beginning of March.

Scott Thomas at Grumpy’s Bait and Tackle in Seaside Park said Barnegat Bay suddenly has a lot of stripers. The usual spring spots, he said, have been giving up plenty of fish with a good number of keepers. Thomas said one spot had over 30 anglers on Monday night. Plugs have been doing the trick. He also said surfcasters are picking a few fish off the beach.

With the year winding down, options are limited. Blackfishing has been a bit up and down but there have been some nice fish reported, especially south of the Manasquan Inlet.

Temperatures are expected to soar, relatively speaking, with some rain on Saturday. The milder conditions should lure surfcasters back to the beaches for another shot at stripers.

There are still some bass back in the rivers and bays, especially in Barnegat Bay, but speed is of the essence as the inland fishery for stripers closes on Dec. 31.