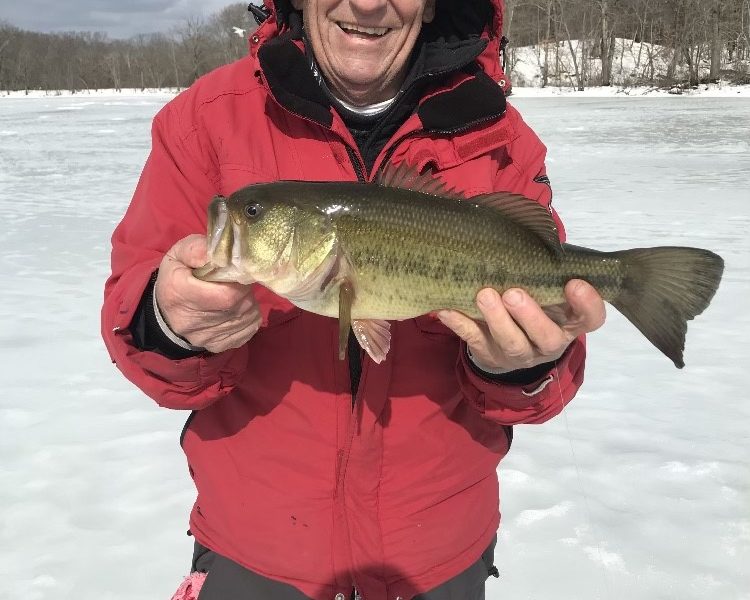 (Above) Until ice sets up universally, smaller water bodies and willing warm-water species will have to do.

The development of ice fishing prospects are echoing the weather – it’s up and down. Anglers are making do with smaller water bodies hoping that the New Year will usher in a good old fashioned New England freeze.

Joe from Granite State’s Rod and Reel Repair in Nashua told me that his grandson has been doing some exploring for a fishing fix locally and hasn’t come up with all that much. Open water could be an option in the Nashua River but the river is high and cranking. Mid-week anglers were getting out on Mill Pond, Webster Lake and Highland Lake but all bets are off that ice on those water bodies will survive the sustained thaw. Regardless, should we get back to freezing again, those spots should be among the first to lock up. Craig from the Tackle Shack in Meredith said that anglers have been out on Pemigewasset Lake, Hawkins Pond, White Lake, Mirror Lake and Hermit Lake. The shop expects to be carrying smelt by this weekend, hopefully that’s a harbinger of hardwater high times ahead!

Brady from Dag’s Bait and Tackle in Auburn, Maine told me that while big water is slow to lock up there’s plenty to do thanks to smaller ponds/lakes where anglers are ice fishing. A few which he brought up are Worthley Pond, Beal Pond, Crystal Pond and Halls Pond. Timing is good for imminent ice in on larger water bodies since the shop is now carrying smelt. Location is everything for smelt inventory and according to Brady, the smelt stock which they carry swims a mere 20 minutes from the shop! Peter from Saco Bay Tackle Company expects to be soon stocking the shop’s outdoor 24/7 Bait dispenser. But first, anglers need to put this ridiculously warm weather in their rear view mirror. When asked about the word from the smelt camps, Peter jokingly said “Probably February!”. Of course, the joke will fall flat if the winter doesn’t start acting like it!

Liberalized regulations along with colder temperatures usually go in lockstep with the start of the New Year in northern New England. We can only hope that once this thaw is behind us ice fishing options will increase exponentially. Meanwhile while we are waiting, smaller water bodies such as Pemigewasset, Hawkins, Worthley and Halls will have to do. The good news is that shops are brimming with bait such as smelt so when conditions are ripe you’ll have no excuse.