It’s a free fishing day on Friday, Nov. 11 as we pay tribute to our veterans in New York. Anyone can fish for free, but you do have to abide by the regulations for the body of water you intend to fish. To make the day even more special, take a veteran fishing with you!

Speaking of regulations, pay attention to the calendar for several reasons. At the top of the list is lake trout season. Lake trout season does not open until Dec. 1 so if you do catch one, release it quickly and safely. Musky season will be closing on Dec. 15 in all the Great Lakes this year in New York, including the Niagara River. Previously the Upper River and Lake Erie closed on Nov. 30, giving you extra time to fish for these elusive fish. On to the fishing …

Mike Rzucidlo of Niagara Falls has picked up a few trout along Artpark (visibility was 5-6 feet this week), but he has seen better success in the upper river from some boat docks. His mixed bag included pike, musky and largemouth bass. Captain Chris Cinelli of Grand Island has been targeting musky around his home base and on Saturday Vanessa Antone of Sanborn caught a clean 40-inch fish with Capt. Chris and his quick strike sucker rig. On Sunday, it was Cinelli’s son Parker fishing with Blake Kenney of Grand Island, and they hit a 47-inch musky on the same set-up. Water temperatures were still in the mid-50s and the best is yet to come.

Niagara River action below Niagara Falls and on down to Lake Ontario continues to offer consistent action for a wide variety of species. Trout action has been good overall, with a mix of steelhead and lake trout according to Lisa Drabczyk of Creek Road Bait and Tackle in Lewiston. Remember that lake trout are not in season until December 1. An occasional brown trout is also being caught. There are a few old salmon swimming around, too. Best trout baits are 10 mm beads, egg sacs, No. 4 and No. 5 spinners, Kwikfish and MagLips whether you are fishing from boat or shore. Tommy Holycross of Wheatfield reports that he continues to pick up some salmon off the NYPA Fishing Platform, but they look more like zombies at this point. Steelhead are being caught in decent numbers and size egg sacs or beads in peach or pink. Holycross noted that browns are rare off the platform and no walleyes were caught the past week.

Capt. Frank Campbell of Lewiston reports good success for a mixed bag of fish in the lower river. Earlier this week he was fishing with media mavens Jeff Samsel of Georgia and Todd Ceisner of Depew and they caught 7 species of fish in one morning.

In the Burt Dam/18 Mile Creek area, Matt Vogt of Newfane reported decent success over the weekend on salmon. A few steelhead and brown trout are being caught at the dam and the colder weather seems to make a difference. This weekend should be good. Egg sacs and skein have worked out best for Vogt. Egg imitations will work, but the best action has been through using real eggs. 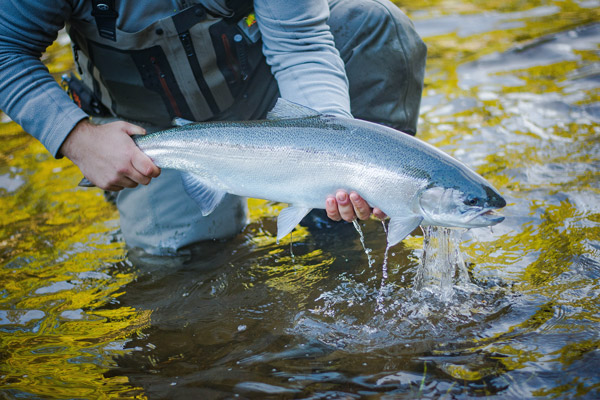 Unfortunately, recent rain fall has done nothing for our streams. It’s still a low water situation in the lake and even if the mouth of Maxwell Creek breaks through to the lake, there is nothing in the creek but rocks.

There is some fishing coming into Sodus and Port Bay through the channels. Salmon Creek in Pultneyville has some browns and steelhead. You can fish some sections on the south side of Lake Road and across from the restaurant near the harbor.

The perch in the bays are starting to bite more because of the cooling water temperatures. In Sodus Bay fish the north end next to the channel and over by the breach.
You can also catch tasty perch between the two islands…Newark and Eagle.

Use bright rubber bait 2-inches and have the bait 15 inches above the terminal end sinker. Tip it with fresh spikes. If you are after sunfish, new regulations only permit 25 keepers.

The Port Bay perch are off the points or on rocky bottoms on the east side of the bay.

Use the north end DEC ramp for Port Bay. The road is bumpy so take it slow.

On Sodus Bay, Bay Bridge Sport Shop located at the south end, has a good launch.

The boat launch at Widewaters Park is an excellent site with plenty of parking for your trailers. From a boat concentrate on the south side of the canal.

The weather it is a changing… A cool day today with winds NE off the Lake. Forecast ahead is for a mid week warmup with chance of rain or showers end of week and then sharply cooler for the weekend. The full moon that was maybe responsible for the uptick in migrations just recently is now on the wane. Chance of some Lake Effect Snow this weekend with any accumulations expected south of here off Lake Erie.

On the Oak guys are getting brown trout hook ups each day with that action seeming to heat up as the fresh salmon action begins to cool down. There are still Kings around, about in a one qtr green fish to three qtr old moldy ratio. Since its still busy with plenty of Kings around, anglers need to carefully spot the places where the browns are shadowing the Kings. Once pressured, browns may move a little distance from the tails of the salmon but they will still likely be in the closest broken water downstream. And along with the browns there’s the chance for Atlantics, cohos or steelhead rounding out nice mixed bag chances. Brown trout on an average are on the smaller side this year with a bigger one here and there mixed in.

Expect daily water level fluctuations this time of the year because of leaf fall and wind. Flows are mod or almost med and mostly clear. Fishing pressure most days pretty agreeable with salmon anglers falling out of the mix now and only mod numbers of guys pursuing brown trout so far. Not sure if we are even going to see the typical influx of trout guys – those crowds are already tardy not unlike the trout and salmon migrations. Some anglers are spread out like in the other tribs east and west. With fair to good bolstered flows from the Erie Canal guys are reporting good brown trout action with a green King here and there and/or a sporty colorful coho.