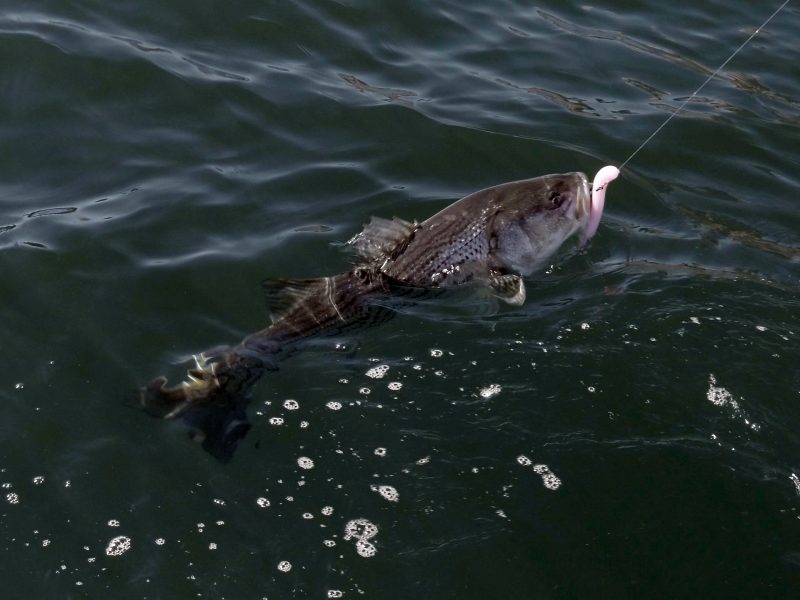 The week has been a little slow for fishing, with windy conditions and less boating activity the past few days.  The beach temperatures are teetering at the low 60’s and striped bass have been active during the morning and night tides. The day bite consists mostly of spiny dogfish and they are taking mullet, bunker, and clam.  Bayside has been much better on the striped bass front with inlets and bay channels providing steady action on striped bass.  The inlet rocks continue to provide steady action on tautog.  The last word I heard was the tuna bite was still going, but it did slow down on yellowfin action.  A big shoutout to owner John B. of Betty and Nicks Bait and Tackle in Seaside Park, as he donated a full flat of bunker to Central Regional HS Fishing club this past week.  The club did their first surf fishing event and were unsuccessful with striped bass, but landed a dozen spiny dogfish.

Hook House Bait & Tackle in Toms River had decent reports of striped bass hitting bunker chunks up and down the local beaches along with a good amount of dogfish.  Boat fisherman picking them up as well out front on flutter spoons and snagged bunker.  Short bass along with keepers are hitting bloods, shads, swimmers and poppers in a few spots on the Toms River.  The Toms River bite has mostly been an evening bite.

Lacey Marine in Forked River said blackfishing has been on fire along the rocks of Barnegat Inlet and the Point Pleasant Canal.  The shop has jigs, rigs and green crabs for anglers and when you stop in they will set you up on some good spots.

Jerzey Buoyz Sportfishing said there has been some nice striped bass around from just off the beaches to the inlets.  Live bait and swimshads has been working the best.  The skipper told me they will be running quite a few striped bass trips in the coming weeks.

Creekside Outfitters in Waretown reported the big stripers are still around and some 15- to 20-pound class fish are on the move south.  Topwater poppers and live lining bunker, spot or eels have produced some keepers while the troll are producing C&R trophy fish.  There are plenty of tautog around as the inlet rocks have been on fire.

Reel Reaction Sportfishing out of Waretown worked some bay spots to put the Pat Thomas charter on 28 striped bass.  The boys kept 8 bass to 32 inches for the table and ended the day boxing a few nice tautog to 18 inches.  The skipper has a few dates available for the month of November.

The Super Chic out of Barnegat Light has been working the 30 hour tuna trips with good success on yellowfin, but the boat will begin sailing for striped bass.  There are a good number of striped bass around and a wide variety in terms of size.

Tony’s Bait & Tackle in Manahawkin reported a decent bass bite in Barnegat bay from the inlet south to Brigantine.  Artificials during the mornings and early evenings have been catching a good amount of fish.  The daytime dragging live bait has been working quite well, especially for anglers using spot.  The tog bite has been stellar at the inlet and out on some of the wrecks to 50 feet.

Tackle Direct in Egg Harbor City received word of some bigger striped bass being caught along the ICW from Atlantic City to Ocean City.  Anglers drifting spots or eels have been landing fish to 37 inches.  Tautog in the backwaters and along the wrecks to 40 feet are producing excellent results.

Tight Lines Bait & Tackle in Somers Point said the striper fishing has been hot in the bays for anglers drifting spot and eels.  Most of the deeper channels have bass, especially along the bridges.  The tog bite continues to be red hot with green crabs working on jigs.  Piling, rocks, and bridge structure all have been prime areas to look for tautog.

Badfish Charters in Ocean City worked some skinny areas with topwater flies to find striped bass to 25 inches.  The skipper has been out finding bass with regularity and he told me he has some availability next week.

The Cape May and Wildwood area has been slower for ocean front striped bass, but anglers are still getting a small amount of croakers and weakfish in the surf.  Bass has been better in the backwaters on eels or spot.  Tautog fishing has been lights out with anglers doing excellent on keepers and shorts.  The current regulation allows anglers to keep only 1 tog per person.

The best bet for the weekend looks to be best for anglers working the beaches off Island Beach State Park and northward as striped bass have been in mass as compared to southward.  Anglers working the beach with bunker chunks and plugs are finding good success.  Southern Jersey should focus on tautog off the jetties as the bite has been “absolutely red hot”.  The green crab bite has been off the hook.  Small jigs and traditional tautog rigs are the way to go for these fish.  Fishing for these fish late October and early November are absolutely a blast as you will catch a good amount in a short period of time.  Good Luck, Be Safe, and Tight Lines!