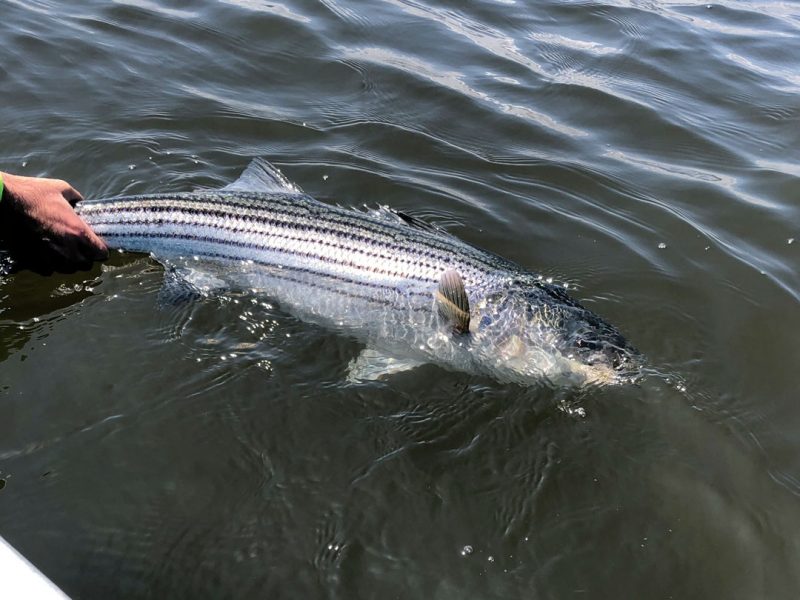 The week has been tough for most of our readers with the storm that came through over the weekend.  The striped bass bite has been red hot for most of the bays in South Jersey, but the bite dwindled to practically nothing over the weekend.  I did receive some reports of the bite rebounding the last few days and the colder weather later in the week should push some of the northern bass south.  The tautog bite has been excellent along the rocks, but the opener was lackluster as the sea conditions were horrendous.  Land anglers reported some nice keepers to 20 inches during the opening day.  Green crabs and sand fleas have been catching a fair number of keepers.  The next few weeks should hopefully be productive in terms of striped bass with better numbers of bass transiting through our areas.

Lacey Marine in Forked River had a good report of anglers making the trek to Sandy Hook and the Shrewsbury rocks as the striped bass bite has been insane up there.  Areas closer to home had slower results on striped bass especially in the backwaters and around the inlet.  The tautog opener was a bust as the seas and winds did not cooperate, but the weekend looks do-able.

Jerzey Buoyz Sportfishing said he’s been working some inshore pieces and jetty rocks to find keeper blackfish.  The skipper was running to the deep to box porgies and some sea bass.  The vessel will be running combination striped bass and tautog trips over the next several weeks.

Creekside Outfitters in Waretown had some nice reports from local charters catching 20 to 30 striped bass in the back.  Some anglers had fish both by boat and on the surf from the south jetty rocks to Little Egg.  Chunked bunker and clams have been working on the beach.

Reel Reaction Sportfishing out of Waretown had a busy weekend with excellent striped bass action in the back.  The skipper had days of 30 to 40 bass in five hour trips and keepers to 36 inches were boxed.  Most trips were averaging 5 to 6 keeper bass along with their limits of tautog.

The Super Chic out of Barnegat Light reported hit and miss action up the beach on shads and bunker, but the dogfish were much thicker.  Anglers fishing the inlet have seen a mix of dogfish and bass.  The boat will be sailing for striped bass over the next few weeks.

Tony’s Bait & Tackle in Manahawkin reported similar results for boats working both sides of Barnegat bay as spots and eels have been producing on striped bass to 30 inches.  Anglers fishing the mid-island bridges reported lots of bait, but fewer bass on them.  The beaches have been occasionally picking up fish to 32 inches, but bring a good amount of bait as the dogfish have been thick.  The rocks of Barnegat Inlet are holding lots of short tautog with a small mix of keepers.

Tackle Direct in Egg Harbor City said the Mullica and parts of the Tuckahoe rivers have been solid on white perch and smaller striped bass.  The marshes and tidal creek entrances were fantastic this past week for schoolie striped bass.  Swim-shads, Zooms, and Gulp baits have been the hot baits when worked across the creeks.  Tog fisherman are chomping at the bit for the 5-fish opener, but the winds and seas have put a damper on the bite.  The store is loaded with tog jigs needed to catch big whitechins.

Tight Lines Bait & Tackle in Somers Point had quality reports from anglers fishing the deeper channels and around the bridges for striped bass.  Small plugs, swim-shads, and Berkley Gulp has been the ticket to finding success.  Live spot and eels have also been working on either side of the tide.  Tog, tog, and more tog was the response from some of the local sharpies as the bridges and any inlet rocky structure provided good fishing.  Green crabs or sand fleas are working quite well on jigs.

Badfish Charters in Ocean City has been consistently reported good numbers of striped bass in the back.  There was some short-lived action out front, but the majority of the skipper’s pursuits has been in the backwaters and inlet.  Soft-bait artificials and plugs has been the go-to lures.

The Cape May and Wildwood area had mixed reports of striped bass being caught on eels and spot along the bay side channels.  Overall, the bite has been pretty slow along the beaches for striped bass.  The tog bite remained excellent from the rocks of the jetty to the reef sites with lots of double digit tog being reported.  Sea bass action has been decent with bigger fish being landed off the deepwater wrecks.

The best bet for the weekend will be to go for one of three species: tautog, striped bass, or sea bass.  But if you plan on doing a combination of two of these species, be sure you keep your striped bass within the 3 nautical mile range as the USCG will be expected to be on the patrol.  Tautog or sea bass fishing offers a limited window on Saturday as the sea conditions look do-able for most and I’m sure it will be a rat-race to the nearest wrecks.  It’s a long season, so don’t be discouraged as there are plenty of fish out there, you just have to find them.  Good Luck, Be Safe, and Tight Lines!