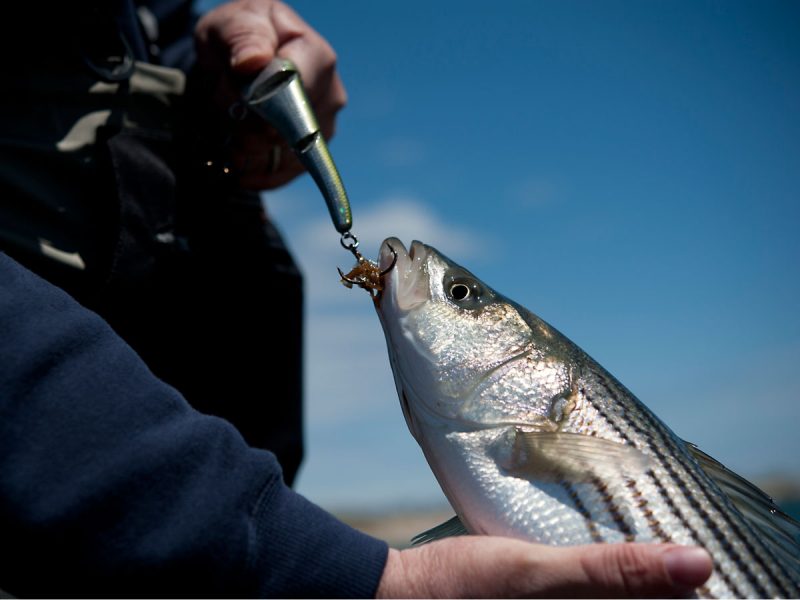 The week has been full of excellent reports of striped bass hitting for anglers on beach and boat.  Anglers working the sods and marshes had decent action on schoolie striped bass.  Boaters and surfcasters starting from Island Beach State Park south to Brigantine have been able to catch some bass on artificials and live baits.  Blackfish is set to open this coming week and based on the reports, bring plenty of crabs.  The action continues to be excellent, except anglers are having to deal with high short to keeper ratios.  Tuna fishing was spotty at the canyons with word of several large bigeyes being caught.

Hook House Bait & Tackle in Toms River had some nice reports of striped bass being landed along the Route 37 bridges on artificials during the night tides.  Anglers soaking bloodworms along the Toms River are finding success for schoolie striped bass.

Lacey Marine in Forked River got word of a nice striper bite in the Barnegat Inlet on live spot and eels. The bite in the bays has been much better at night with some fish over 40 inches released.  Anglers working crab baits continue to maraud tautog at the north and south jetties of Barnegat Inlet.  The beaches of LBI had a few striped bass being caught on bunker chunks, but beware of the dogfish.

Jerzey Buoyz Sportfishing said the offshore wreck bite has been very good and the crew has been bringing home bluefish, sea bass, porgy, and 1-fish limits of tautog.  The skipper will be switching over to striped bass and tautog combo trips over the next week.

Creekside Outfitters in Waretown had good reports of striped bass over 40 inches along the beaches of Island Beach State Park.  Anglers in boats had the best shots targeting schools of bunker in 20 to 30 feet of water.  No word on the offshore tuna bite, but it is the time of year to start seeing some bluefin tuna around.  The blackfish bite continues with loads of shorts being caught along the inlet and short to keeper ratios have been averaging 20 to 1.

Reel Reaction Sportfishing out of Waretown has been working the inlet and bays to put some decent catches of striped bass to 36 inches and 1-fish limits of tautog.  The trips are averaging over 20-plus striped bass per trip with good numbers of bonus tagged fish.  There are a few weekday afternoon trips available in the coming weeks.

The Super Chic out of Barnegat Light reported some nice tuna offshore, but the skipper will begin striped bass trips over the next month.  There are lots of jigging fish in the northern parts of NJ, so the bite should be excellent as they slide down.

Tony’s Bait & Tackle in Manahawkin reported some action from the mid-island bridges on small swim-shads.  Most of these fish have been in the 20 to 24 inch range.  The hot bite has been eeling for bass during the evening and some nice overs have been released.  The tautog bite remains hot along both sides of Barnegat inlet.  Sand fleas and green crabs continue to work for these fish.

Tackle Direct in Egg Harbor City had great reports of the bay striped bass bite along with solid reports from the rivers.  Small artificials, Berkley Gulp, and swim-shads have been working for the river fish while live spot or eels are doing the best work along the channels of the ICW.  Inshore tautog has been phenomenal over the last week with traditional rigs or jigs working the best.

Tight Lines Bait & Tackle in Somers Point received a big shipment of swimmers from Berkley and fresh crabs for the tautog bite.  The shop said the bite has been on fire for striped bass in the bay.  Live spot or eels are doing the trick along with some artificials.  The ocean side has been considerably slower for striped bass.  Tautog have been very active along the jetties, bridges, and inshore wrecks.

Badfish Charters in Ocean City ran to some of Capt. Brian’s favorite skinny water spots to find some nice striped bass.  The late afternoon into dusk timeframe has been the best for these backwater fish.  The skipper told me that there are a few weekday openings in the coming weeks.

The Cape May and Wildwood area has been slower on striped bass from the boats except for some decent schoolie action along the west sides of Wildwood.  The beaches of Delaware bay had a few reports of striped bass being caught on bunker chunks and clam.  It was another week of stellar tog fishing and green crabs have been the ticket.

The best bet for the weekend will be to work on your tackle, prep for the upcoming blackfish season, or visit a local tackle shop.  The remnants of tropical storm Nicole are supposed ot grace our coast on Saturday and projected winds are up to 50 miles per hour.  The water will definitely need a few days to clean up.  If you have to get out, I’m sure you might be able to catch a few blackfish from one of the local inlets or bridges in South Jersey. Good Luck, Be Safe, and Tight Lines!