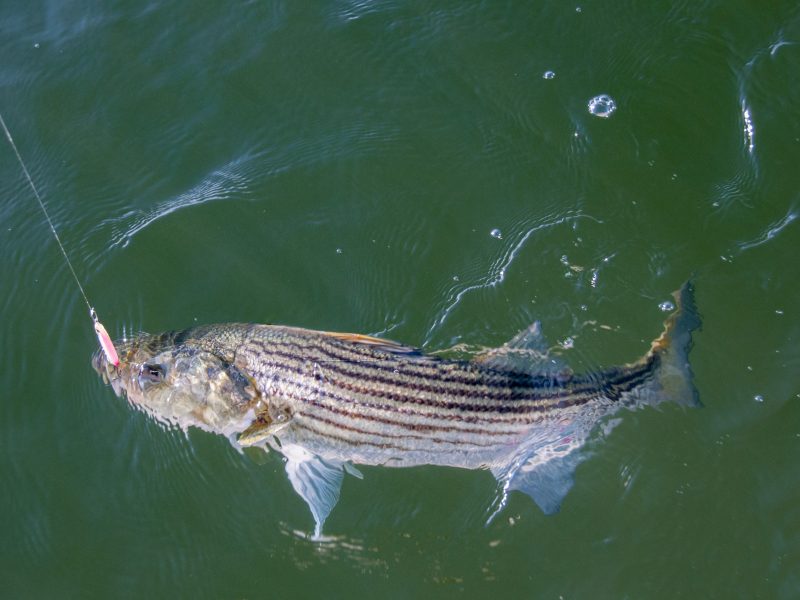 Matt, at Black Hall Outfitters in Westbrook told me that he has been able to get out a few times on some sheltered structure and has still been finding a good tautog bite. There are still plenty of tautog holding across various depths, so we should have strong fishing right up to the close of the season. Forty plus feet of water has been the ticket for larger fish, but Matt was also able to find some keeper fish as shallow as 15 feet this week. Matt also reports that there is still a good school striped bass bite along the beaches, as they are still keyed in on the peanut bunker, and the bite is really starting to materialize in the creeks and rivers as well. Small soft plastics have been the ticket for hungry bass, just continue to slow down the presentation as the temps drop. Be sure to check out the Black Hall Outfitters Holiday Gift Guide this weekend to get some holiday shopping done when you’re not on the water!

Heather from Black Hawk Sportfishing reports that the wind made things difficult this week, but when they’ve gotten out, the results have remained consistent. Their combo trips continue, with part of the day spent blackfishing, and the rest of the day being spent bottom fishing for everything else. They’ve had some wind to contend with on most trips, but they are still finding some great fishing! They’ve had good numbers of blackfish most days, along with a strong showing of cod. The cod numbers have really started to increase of late, so hopefully that continues. Limits of big sea bass are still common, and there are a few nice scup still in the mix. They will continue to run combo trips up to the blackfish closer on November 28th. After that they will be running bottom trips whenever the weather allows. New trips will be posted on their website on Monday nights, so be sure to lock in a date as soon as possible!


Captain Mike Roy at Reel Cast Charters reported that things were tough this past week due to the wind, but they found plenty of stripers on the days that they made it out there. The lower CT River is still holding a good mass of school bass, along with a few over-slot fish in the mix. Captain Mike is wrapping up another strong season, but Captain Jon will still be running some river trips through December, so contact Mike for some late season bass action!

Fisherman’s World in Norwalk reports very good fishing for anglers who have been able to get out on the days that the wind hasn’t been screaming. A big push of mackerel has actually entered the Western Sound, with some boats in the area reporting the best mackerel fishing they can remember in years. Striped bass action across the region has been hot, with the best action being around the beachfronts and shoreline, as the bait continues to dump out of the bays and estuaries. Pockets of bait can be found from the Norwalk Islands, over to Westport, Penfield Reef, and Bridgeport. Along with that bait, on most days are blitzing bass. Most of these fish are running from the school to slot-size although a few bigger fish are mixed in. There are also still bluefish in the western sound and they are of the same, giant variety as weeks past with many fish around the 15-pound mark. To the west, the bite for bigger stripers is going strong with word of a hot Diamond Jig bite coming from the West Slope area. Groundfishing has been strong as well, with steady tautog action, and good sea bass fishing in 50 to 70 feet of water. There are still some scup around, and they are huge, with most of the large hubcaps coming from wrecks in 50 feet plus of water. The Saugatuck Reservoir remains the best bet for freshwater anglers in the region, and it seems to have improved this week, with the rapidly dropping water temperatures. Smallmouth remain very active at the Reservoir, while the trout reports seem to have improved quite a bit for anglers dunking shiners under slip bobbers.

Mother Nature appears to be cooperating for us, for at least most of the holiday weekend. It should be a good weekend to take one more shot out on the salt or take advantage of plentiful freshwater options.

Connecticut anglers continue to see plenty of light tackle action, with a huge abundance of peanut bunker continuing to fire up topwater blitzes throughout the sound. Some bigger bass are starting to make their ways to the tidal river mouths as well, and we should have some excellent holdover fishing right through the winter. The tautog fishing has been steady for most anglers, with anglers working deeper structure finding bigger fish, and dealing with less shorts. Sea bass and scup are helping to fill the coolers, although both seem to be transitioning to deeper water. The DEEP has recently stocked Atlantic Salmon in the Naugatuck and Shetucket Rivers, which provide a great fall fishing opportunity for freshwater anglers. There is also strong trout fishing reported from a number of the state’s TMA’s, and improved fishing at the Saugatuck Reservoir.