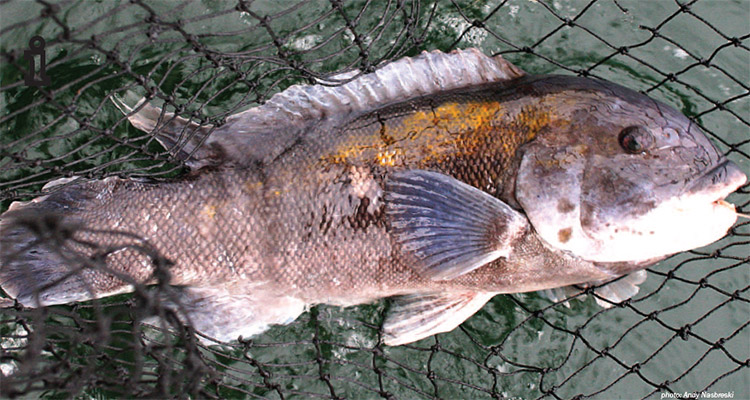 Tuna, Tuna, Tuna – it’s still going strong.  The tuna bite has not stopped with anglers still getting solid limits within a few hours.  The canyons have been excellent and the flats prior to the canyons are also holding excellent numbers of squid and yellowfin tuna.  Striped bass fishing has been epic north of our area, but these fish will eventually trickle south as the season progresses.  Fisherman working the bays are finding decent action on both sides of the tide with live baits, soft plastic artificials, and 4 to 5 inch plugs.  Tautog have provided a ton of action from the rocks of pretty much every inlet up and down the coast.  Green crabs tipped on jigs or rigs have provided the best bites.

Hook House Bait & Tackle in Toms River had reports of some bigger bass being caught off Island Beach State Park, but it has definitely slowed from 2 weeks ago.  There are plenty of smaller bass around off the beaches and in the bays.  The Toms River has some bass and good numbers of perch which are being caught on bloodworms.  Tog are still being caught in good numbers from the jetty rocks along Barnegat Inlet.

Lacey Marine in Forked River reported excellent tuna fishing from the canyons which has continued to be red hot over the past few weeks.  Yellowfin, mahi, and tilefish are coming over the rail for most boats making the run.  The Barnegat Inlet area had some striped bass and better numbers of tog coming off the jetties.

Jerzey Buoyz Sportfishing found porgies on the local wrecks, a few sea bass, and headed back to the inlet area to box limits of tog.  Capt. Jason had his family out boxing good sized porgies and limits of tautog.  The skipper has a few dates for the month of November available, so give him a text or ring.

Creekside Outfitters in Waretown reported striped bass being landed from the beaches of IBSP, LBI, and the western parts of Barnegat bay.  Most of the bass have been 20 to 30 inches and have been landed on live eel, spot, and artificial lures.  Tuna fishing continued to be “en Fuego” at the canyons with limits of yellowfin being reported.

Reel Reaction Sportfishing out of Waretown worked hard this past weekend running 3 charters to put clients on 30 striped bass keeping 5 for the table.  With the good tog bite, the charters culled catches to Tog to produce limits on each trip ranging from 17 to 19 inches.  The charters released close to 114 tog over the three trips.  The crew has 4 dates left in November, so give them a call or book through the website.


The Super Chic out of Barnegat Light has been hitting the tuna bite at the canyons to box limit of yellowfin on chunked butterfish and sardines.  The bite has been exceptional and should continue for another week or two as the offshore temperatures look to be stable.  The boat will be heading out for striped bass in the coming weeks, so give them a ring.

Tackle Direct in Egg Harbor City received good reports of striped bass and white perch from the Mays Landing area and a few spots up the Mullica.  Bloodworms have been fantastic and grass shrimp if you can net them.  Anglers finishing out the fall sea bass season found lots of porgies mixed with keeper sea bass up to 30 miles off the beaches.  The beaches of Brigantine and Atlantic City had some striped bass being landed, but most have been under 28 inches.

Tight Lines Bait & Tackle in Somers Point said the tog bite has been red hot from the jetties and bridges over the past week.  Sand fleas or green crabs tipped on 1/2 to 1oz tog jigs worked the best for fish over 15 inches.  Striped bass continue to provide excellent action for anglers drifting spot or eels during the day and evenings.  The bass have been between 24 to 33 inches.

Badfish Charters in Ocean City worked the backwaters for good numbers of striped bass to 33 inches.  The skipper has been out almost everyday working flies and artificials for bass.  Most of the bass being caught are released as the skipper has been promoting lots of C&R.

The Cape May and Wildwood area has been relatively slow on the striped bass front, as most of the action has been far north of the locale.  There are a good number of smaller fish around the estuaries and tidal creeks.  These fish have been perfect to play catch and release on small soft plastics, swimming plugs, or flies.  The fall sea bass season ended and there were good numbers of keepers coming from the deeper wrecks along with porgies and bluefish.  Surf fisherman have been picking at small striped bass, a few blues, and occasional weakfish over the past week.  The hottest bite has been the offshore yellowfin bite with boats doing the overnight thing to box limits of yellows on butterfish chunks.

The best bet for the weekend will be to hit one of the jetties or bridges in South Jersey with a bucket full of green crabs and lengthy clothes line.  The bite is so good, don’t be surprised to release close to 30 tog in a short session.  Anglers looking to cull can leave the fish swimming on a stringer or clothes line, just be careful as they have a knack for navigating into crevices.  Anglers looking for striped bass should attempt to hit any of the lighted bridges during the evening while working the marshes during the day.  The action has been excellent on artificials and clouser flies on the ebb or flood tides.  I will probably be looking to hit the bass early morning and during the day, as the evenings will be busy watching and rooting for the Phillies.  I don’t think there is a good weather window this weekend, but if it changes, the canyons are where the hottest bite is occurring.  Good Luck, Be Safe, and Tight Lines!