Lower Niagara River action is slowly transitioning into a fall timeframe. Bass are starting to bulk up as they get ready for winter. Smallmouth bass action was good for Capt. Ned Librock of Catching Dreams Charters and Roy Larson of Wheatfield heading into the weekend. Crayfish was the bait of choice as they drifted from Lewiston to Joe Davis. When they sampled the area around Fort Niagara, they had a rude greeting from only sheepshead. Matt Wilson of Wheatfield reported that things are starting to change, too. Bass are finally starting to show in numbers on the lake and they are in places they haven’t been in 2 years. Fishing with his wife Katie Wilson, they bumped into a large school of smallies and put the smack down on them putting over 20 fish in the boat in just 3 hours. Matt let Kate take the controls over for the day and it didn’t take her long to find them on the graph. Tubes in watermelon candy and roadkill produced numbers of fish. As far as quality, the big boys haven’t shown up yet. Meanwhile up in Devil’s Hole, the first salmon have finally arrived off the NYPA fishing platform. The best is yet to come.

In the upper Niagara River above Niagara Falls, Wilson enjoyed a banner day on Sunday putting 50 smallies in the boat. Once again, the worse the weather, the better the fishing. Drop shots and Ned’s took the day with Berkley flatworms, and KVD dream shots taking the day by far. Big fish, big numbers – focus on bottom changes with drastic drop offs. Those fish are using the current to their advantage, staying on the back side of drop offs and letting the food come to them. Light weights are the ticket. Let your bait fall very slow and you’ll pick them up on the drop. If you don’t feel the bottom, you have a fish.

Out in Lake Ontario, Capt. Pete Alex of Vision Quest Sportfishing reports that recent northeast winds had the lake all riled up and changed things in close. The salmon were back trickling into the Niagara Bar and a few fish have been caught there, but nowhere near the numbers that were hanging out previously. Some of those fish ran into the river. Alex says the offshore bite has been fast paced for steelhead, 2-year-old kings and occasional mature salmon in 350-450 feet of water north and northwest of Wilson. The action had been between 35 and 85 down with steelies coming higher. The water offshore has been relatively cool and keeping their offerings in the top 90 feet of water. The steelhead action has been near spectacular. Several steelies in that 10-12-pound range of fish were being caught. Their best fish of the season were caught recently, including a 21-pound Coho on flasher and meat and a 28-pound king on flasher and fly. Meat, flies, and spoons have all been working offshore for the salmon and trout out there. Off the bar, flies have been outproducing meat, spoons and plugs for staging salmon. You can also work the waters off Wilson and Olcott in 85 to 120 feet of water for staging kings.

In Olcott and Wilson off the piers, some fish are being caught according to Karen Evarts at The Boat Doctors. A few salmon are showing up along with the occasional brown trout. There are plenty of bluegills around, too. Some pike have been caught off the Wilson pier. Spoons, spinners, Rat-L-Traps and jerk baits will all catch fish.

The September meeting of the Lake Ontario Trout and Salmon Association has been moved and it is now being held Sept. 15. Starting time is still 7 p.m. at the North Amherst Fire Hall on Tonawanda Creek Road and it will be a panel of LOTSA captains giving a season recap. Salmon School registration is now taking place for members. It will open to the public on Sunday. Check out www.lotsa1.org. The next meeting of the Lake Erie Chapter of Fly Fishers International (Federation of Fly Fishers) will be Sept. 15 at the American Legion Post 735 on Legion Drive in West Seneca starting at 7 p.m. Guest speaker will be local expert Rick Kustich of Getzville, accomplished author and fly fishing guru doing a presentation on spey casting and micro spey casting. It is open to the public.

The water in front of the Salmon River has attracted plenty of salmon. Both coho and Kings. But just because you mark them doesn’t mean they will bite!

This week brought big west wind pushing temps back down. Leading to the best depth changing day to day. But a good starting point is to set down shallow and work your way out as the day goes on.

The fishing out of Oswego has been tough since the “lake flip” last week.  It’s “back to the drawing board” now that the temperatures went back down.

When faced with these conditions you have a few options:

Most fish are being caught in the lower stretches of the river, Douglaston Salmon Run all the way to town. But with multiple consecutive days of movement, the fish are starting to spread further upstream.

The best baits this time of year are flies, soft eggs, and small egg sacs. Colors vary by time of day and light conditions.

For this week’s report we’ve mostly talked to anglers wading in the water. Very few if any salmon are present in the river. With water temps in the mid 70’s and a very low flow, the fish just haven’t moved into the system in decent numbers yet. But stay tuned! 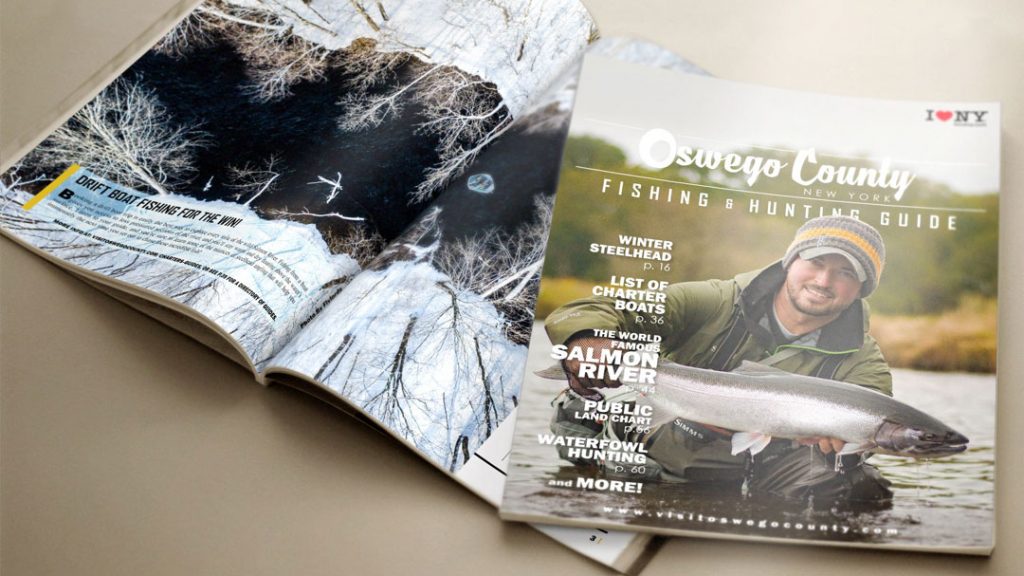 Some late summer kings have been caught west of Sodus Bay in 140 to 200 fow down 40 to 60 fow. Meat rigs seem to work. Troll to Hughes’ Marina and back.

There were a few browns caught in the Sodus Bay channel. They were hitting small red/silver spoons, like Kastmasters and Cleos thrown out from the pier.

With recent rainfall the streams have started to run. Not fast, however better than a few weeks ago.

We will start the streams report in a few weeks. October is still the best month for browns and steelhead. Get your egg sacs ready.

Some bass were caught in the Port Bay channel this weekend. Lake Ontario flipped pushing cold water on shore which will push smallmouth bass into warmer water in the channels.

The water level is low so be careful launching your boat. Use the north entrance for Port Bay.

Largemouth bass are being caught in the Widewaters section of the canal. Use worm rigs and stay on the south side where the weeds are heavy.

Thanks to some cooling NE winds off the big Lake O earlier this week there’s been some salmon action at the Oak. Early-ish fish that generally go straight to the dam – surely not that abnormal. Anglers have had some hook ups at the dam. A few staged fish were seen boiling around at the Bridges area yesterday evening. Small boat casters and trollers and skein drifters may be able to get on those fish if they stay put. Pier head casters have got some hook ups earlier this week on those cooled down near shore waters on a few salmon and trout. The chance is there on any given low light morning or evening or at night now as salmon are scouting or moving thru. Flows in the Oak are not bad especially given the past dry conditions. Upstream Canal water feed likely responsible for helping to encourage any early migrations. Other area smaller tribs on the low and clear side. Fishing pressure real light but there is at least some chances to get in on a few early fish. Fish and peeps will tend to concentrate in upstream spots as the season progresses. Hot and dry and clear skies and clear water and calm winds will tend to stall migrations while wet and cold and cooling winds and stained water will tend to help migrations.