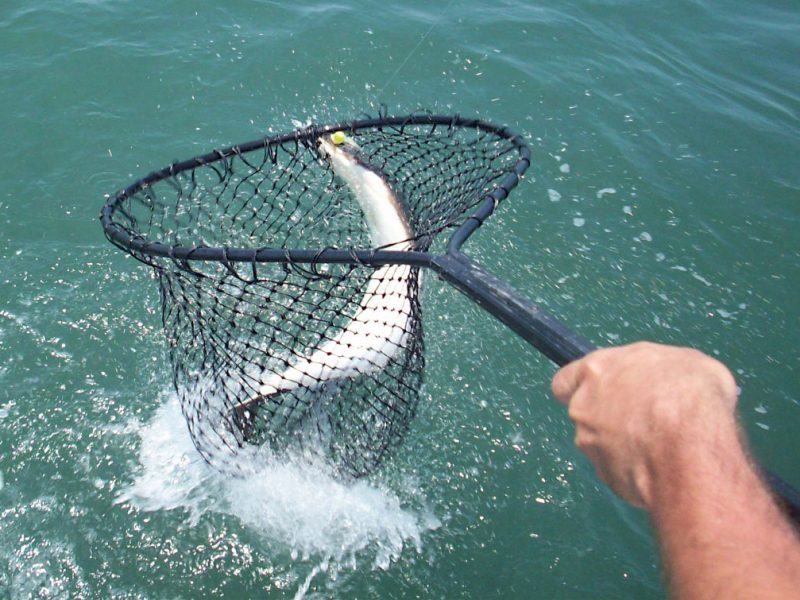 The bite was super strong on inshore fluke with lots of boats getting decent quantities of keeper fish and the offshore pots have been stacked with mahi. But mother nature’s 1-2 punch in the Atlantic with 2 hurricanes may have the plump lady beginning to sing. It all depends how much swell and storm we get, but anglers might want to push further off when looking to box keepers this upcoming weekend. This month is the time for offshore tuna and mahi at the canyons as the bite is usually the best. Surf fisherman have been getting excellent shots at flounder, kingfish, and croakers until this past week. Hopefully, the swell hasn’t messed things up.

Hook House Bait & Tackle in Toms River reported decent fishing for a wide variety of species during the night on blood worms.  The shop just received a fresh order of gear for the upcoming fall season.  The wet weather during the week had most anglers taking a few days off.


Lacey Marine in Forked River said fishing was excellent leading up to the week long blow.  Fluke and mahi were being caught from the Barnegat ridge and some of the offshore wrecks.  Bluefin tuna were being landed from the West side of the ridge on trolled lures.  Blowfish, kingfish, and sea bass were the main catches for bay anglers.

Jerzey Buoyz Sportfishing was out on the fluking grounds prior to the blow and the skipper boxed some nice fluke along with some mahi.  The boat will be tied to the dock until the ocean subsides this coming weekend.


Creekside Outfitters in Waretown had excellent reports of bluefin tuna hitting trolled feathers on the west side of the Barnegat ridge. Mahi have been at most of the offshore pots, and the trick is finding the un-fished ones. Fluking was excellent at the Barnegat Reef and Axel over the past weekend, but it remains to be seen with the latest weather events.

Reel Reaction Sportfishing out of Waretown ran both bay and inshore fluke trips over the past weekend.  The skipper was boxing limits of fluke to 5 pounds outside and had some nice numbers inside. With school in session, the boat switches to their weekend and weekday afternoon schedules for fluke and will begin evening striped bass trips towards the end of September.

The Super Chic out of Barnegat Light continued to work both the offshore grounds for tuna and mahi as well as the inshore reefs for fluke.  The skipper has some dates available in September and October for canyon action, so give them a call.

Tony’s Bait & Tackle in Manahawkin had excellent reports of blowfish around the “BI” and “BB” buoys.  Crabbing has been a little slow, but that should begin to pick up.  The main channels and inlets have been the spots to go for fluke.

Tackle Direct in Egg Harbor City said the Jersey reef scene was on fire for keeper flatties over the weekend and prior to the recent blow.  Fish up to 7 pounds have been landed with regularity.  The offshore bite was alive for wahoo, tuna, and mahi, but not too many boats have been out due to major storm swells.

Tight Lines Bait & Tackle in Somers Point had good reports of tog and sheepshead from the bridges and pilings along with some triggerfish.  Fluking has been decent in the inlets, but much better at the reef sites.  There has been some good movement of bait at night and there has been feeding striped bass and weakfish on them.

Badfish Charters in Ocean City reported some nice flounder off the local wrecks prior to the midweek storm.  The skipper has been jigging baits over top sticky pieces to put some nice catches together.  September and October have some open dates for striped bass and weakfish, so give Capt. Brian a call.

The Cape May and Wildwood areas had surf fisherman reporting lots of variety: kingfish, croaker, weakfish, and fluke off the beaches.  Fishbites, bloodworms, and shedder crabs have been working well on kingfish rigs.  The boats have been picking away at fluke at the local reef sites and individual wrecks over the Labor Day weekend.  Stripers have been landed in the backbays and along the bridges around Cape May during the night tides.  Crabbing has been excellent for most using traps and bunker.  Offshore action has been very steady over the past month with lots of tuna, mahi, marlin, and some wahoo at the inshore ledges.

The best bet for the weekend will be to fish our bays and inlets on Saturday.  There is some serious leftover swell from both tropical systems that stayed offshore over the week.  The night bite for striped bass and weakfish has started at most of the bridges, marshes, and any area with lights.  Fluke fishing in the bays would be a good bet for boaters and 5 to 6 inch Gulp baits have been working best.  The ocean bite for fluke or flounder may be iffy on Sunday because of the recent swell.  They may have moved a bit deeper, so if you can make it out it may be worth it to take a shot at some further locations.  We have less than 20 days till the close of the season, so the coming weeks are the time to pack away a few fillets.  Good Luck, Be Safe, and Tight Lines!