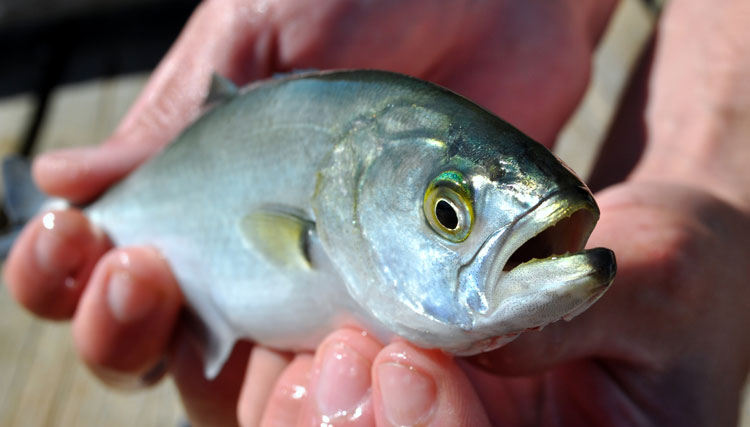 The past week provided another solid few days of fluke fishing for most of the southern reef sites. The bite rebounded well after last week’s swell, but Hurricane Fiona may officially end our 2022 flounder season as the hurricane’s swell is projected for this weekend. Canyon action has been excellent for yellowfin, tilefish, and mahi. Overnight chunking with butterfish and sardines seems to be the best methods. Fall is definitely in the air as lots of mullet have been staging along the inlets ready to make their way out and south.

Hook House Bait & Tackle in Toms River has been stocking up for the fall with an influx of new inventory. Island Beach State Park was pretty good over the past week for some albacore, bonita, and spanish macks on light metals.  The fish were up and down fairly quickly from Seaside to the inlet. Fluke continue to bite off the surf, but there has been quite a few more shorts than keepers.

Lacey Marine in Forked River reported another solid week of blowfishing the Barnegat bay, and decent fluke fishing from 6 miles east and south to the GSS reef. The inlet area has some fluke, but anglers have to work through quite a few shorts. Offshore action has been pretty solid for tuna and mahi with the Toms canyon producing some nice fish. The mid-range lumps are also providing spotty tuna action along with some quality mahi.


Jerzey Buoyz Sportfishing was out in the deep looking for mahi and fluke. The skipper said the fishing was decent with clients able to box some nice fluke and a few mahi. Once fluke season is finished, the crew will be focusing on sea bass for the mid-October opener.

Creekside Outfitters in Waretown had another solid week of fluke reports mainly from the ocean side as compared to the inlet. The bay area has been good on blowfish, small sea bass, and some nice kingfish. Anglers working the ridges to the canyons are finding yellowfin, mahi, and some bluefin in the mix. Surf fisherman off Long Beach Island worked the suds for short fluke, small bluefish, and some weakfish.

Reel Reaction Sportfishing out of Waretown was working both ocean and bay with younger clients confined to the bay spots. The clients were able to put over 30 fish aboard, while keeping 3 to 4 fluke for each 4-hour trip. Ocean trips have produced mahi and nice fluke at some of the deeper spots.

The Super Chic out of Barnegat Light has been working the canyons for yellowfin and mahi. Capt. Ted said he has the Southern Regional fishing club booked for a canyon trip this upcoming weekend. The boat will be concentrating on fall canyon action until the sea bass season opens in October.

Tony’s Bait & Tackle in Manahawkin had excellent reports of fluke and mahi from some of the deeper offshore wrecks. Anglers fishing 6 to 10 miles out have been finding some quality flatties, and some of the deeper areas have been harboring good numbers of mahi. Bay fishing has been good for variety, but less on the number of keeper fluke as a good portion have pushed out of the bays.

Tackle Direct in Egg Harbor City had nice reports of fluke hitting 6-inch Gulp baits at the reef sites. Most of the action has been in the 65- to 95-foot depths with some nicer fish. The bays are loaded with schoolie striped bass and the evenings are the best time to target.  Tautog fishing has been excellent along the bridges and jetty rocks. Green crab tipped on a light jig is working best. Offshore action has been stellar this past week with lots of mahi and yellowfin being caught in the canyons.

Tight Lines Bait & Tackle in Somers Point received a shipment of sand fleas and fresh bunker. Tautog, sheepshead, and some triggerfish have been caught from the local wrecks and jetties while the beaches have provided some action on small blues and striped bass in the evenings. The offshore canyons continue to hold good numbers of yellowfin.

Badfish Charters in Ocean City reported some nice topwater striped bass action over the past week and the skipper will start booking trips for early fall bass. Capt. Brian said it’s a great time of year for topwater bassing.

The Cape May and Wildwood areas had another solid week of flounder fishing with the reef sites continuing to produce some quality fish to 8 pounds.  Most of the wrecks have some life around them, so anglers just have to work the baits in repeated drifts.  Canyon fishing has been on the insane level with lots of yellowfin and mahi coming from the Baltimore and Wilmington.  Kingfish, small bluefish, and weakfish were cooperative off the Cape May and Delaware bay beaches.

The best bet for the weekend will all depend on the proximity of Fiona to our coast. Even it the hurricane stays a considerable distance to the East, it’s swell will surely affect our fishery. The ocean fluke bite may not be in play for this week, but the areas around the inlets should be. Anglers looking for quality flounder should consider drifting live peanuts, mullet, or spot to target the larger fish. Another good option is to fish the bridges and back marshes as striped bass have been more active. Small plugs, paddle-tails, and soft plastics are great lures to throw at these fish.  The canyons may be out of the question this weekend, but there has been plenty of tuna and mahi for boat limits.