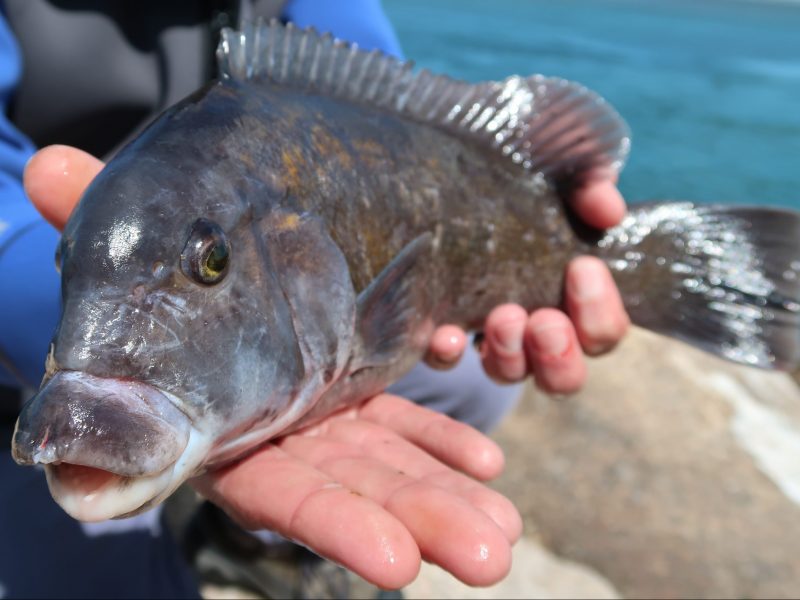 September is officially here and so are the schools of baitfish. Mullet, spearing, and peanut bunker have been heavily schooled up in the marshes, lagoons, and open bays. Bay fluke, weakfish, and striped bass continue to gorge on the readily available protein. These baits provide excellent opportunities for anglers to key on big fluke, especially around the inlets. Doormat sized flounder will engulf these baits given the right current, tide, and feeding conditions. Yellowfin and mahi continue to feed at the canyons, while the first schools of bonita have been hitting the inlets. Depending what type of angler you are, the fall is fortunately or unfortunately around the corner.

Hook House Bait & Tackle in Toms River reported good fishing along parts of Island Beach State Park with anglers getting early morning slot striped bass action along with fluke on the beachfront.  Barnegat bay still has a very good blowfish bite with lots of action for the kids.  The inlet has been the hotspot for keeper fluke to 8 pounds this past week.

Lacey Marine in Forked River said the inlet and the main channels were the spots for keeper fluke for bay fisherman working live minnows and Gulp. Fluke to 23 inches have been landed along with plenty of shorts.  Ocean fluking has been excellent at the local reef sites for keepers and some of the floats had decent mahi action on them.  The offshore canyons are the place to be for keeper yellowfin, mahi, bigeye, and wahoo.


Jerzey Buoyz Sportfishing was out for their first fluke trip and described the bite as excellent with many over 18’s in the mix.  The skipper will continued to target fluke in the coming weeks.

Creekside Outfitters in Waretown had a host of weigh-ins for fish to 4 to 8 pounds being landed in the bay along with some slot fish.  Ocean bite has been excellent especially off Seaside and the Axel Carlson reef site.  LBI surf fishing was on-fire this week with lots of kingfish, spot, and fluke being landed around the high tides.  The bay blowfish bite remains on-fire from the usual spots Lacey to Beach Haven.

Reel Reaction Sportfishing out of Waretown has been averaging 8 keepers per 4 hour bay trip and 12 to 16 keepers per 5 hour ocean trip over the past week.  Limits in the bay and ocean has been doable with Gulp and heavy jigheads.  The skipper will continue to target fluke, followed by night striped bass in late September and October on the skiff before switching over to tautog and striped bass.

The Super Chic out of Barnegat Light has been working the reef and open bottom sites to produce a good number of over and under fluke for anglers.  The offshore trips have been producing a good number of yellowfin and mahi.

Tony’s Bait & Tackle in Manahawkin excellent reports of small bluefish, sea bass, and striped bass hitting baits around the bridges.  The surf scene was a flurry of fluke action on bucktails tipped with squid or Gulp.  Inshore fluke fishing remains hot on the reef sites with the southern sites producing excellent action.

Tackle Direct in Egg Harbor City said the news of the week has been the excellent nearshore and offshore action on wahoo, cobia, mahi, and tuna.  The canyon bite has been excellent, especially for night time chunking.  There has been a few big sharks around to make their presence known on hooked tuna.

Tight Lines Bait & Tackle in Somers Point had some beautiful weigh-ins this past week for cobia, mahi, and wahoo.  The offshore scene has also been a buzz with tuna, mahi, and swordfish.  Inshore the reef sites have been blazing on keeper fluke and the bridges solid for tog and sheepshead.  The shop has a full line of bay, inshore, and offshore baits to assist anglers for the hot bite.  Inshore flounder fishing has been solid at the Ocean City, Wildwood, and Cape May reef sites.

Badfish Charters in Ocean City reported a solid week on flounder from the wrecks and reefs as the skipper has been running trips in the ocean when conditions are right.  The bay continues to be solid for action as short and keeper flounder are in the mix.  There has been some blues, weakfish, and sheepshead around the area bridges.

The Cape May and Wildwood areas have been hot on flounder at Reef sites #9 and #11 along with some nice fish on the Cape May reef.  Anglers have been working the deepwater sites with big bucktails for fish to 9 pounds.  Small bluefish, croakers, and several weakfish have been very active along the beaches and parts of the Delaware Bay.  Anglers working and retrieving small Gulp in the surf along with finesse lures have been getting the most pickups.  Tautog are active along the jetties and bridges along with some sheepshead and triggerfish.  The offshore scene has been insane with excellent action from most of the canyons southern and northern.  Yellowfin, wahoo, mahi, and deep-dropped tilefish have been on the list for bluewater anglers.

The Jersey Coast Shark Anglers Association is still looking for boats to join the Kids with Cancer Overnight Tuna Tournament on Sept. 10. Visit their website for more information.

The best bet for the weekend is similar to the last week.  Fluke (summer flounder) are on thick on the reef sites and inlets. Inlet fishing has live mullet, peanut bunker, or minnows as the top baits to use along with large Gulp swimming mullet or grubs. The inshore reef sites are producing on large Gulp or fish belly strips tipped on large bucktails. Surf fisherman have excellent opportunities at a variety of species and most of the beaches are in play for this action. Early September is the perfect time to walk along the suds and work a rod for gamefish. Good Luck, Be Safe, and Tight Lines!