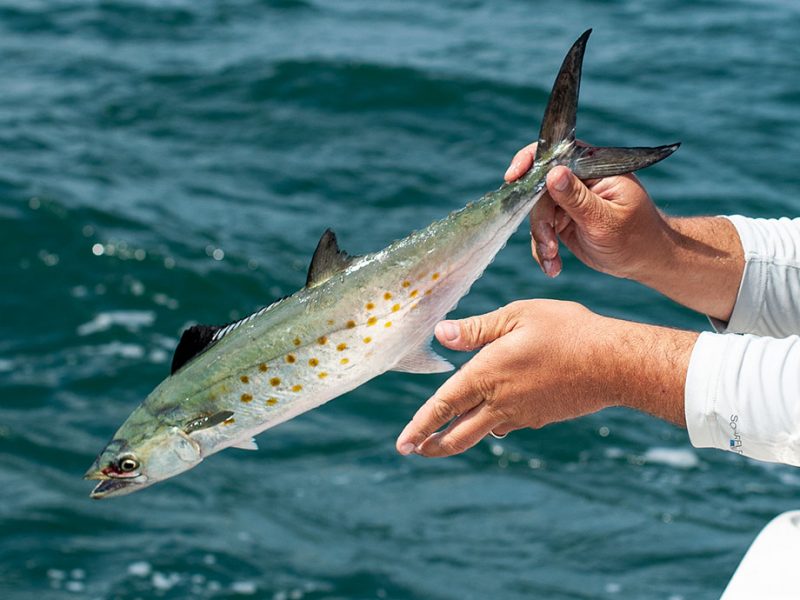 Matt, at Black Hall Outfitters in Westbrook told me there’s a lot to choose from throughout the Sound right now. School to slot sized bass have been blitzing on small bait during most mornings and evenings, especially on the outgoing tides. There is a plethora of different bait out there, but as long as you match the hatch, you should be in good shape. Anglers looking for bigger bass are doing well drifting eels, GTs, and some large plugs through the local reefs and rips. If you’re having a hard time finding the fish, the always proven tube and worm has been a great producer/fishfinder. The snapper bluefish have shown up in full force, and bluefish of all sizes continue to be prevalent. The false albacore reports have been mostly quiet from South County and non-existent in the sound. The large schools of peanut bunker in the area should ensure that the albies hang around once they get here. Offshore anglers are still reporting an excellent yellowfin bite south of Block Island, with some boats reporting as many as 30 fish in a day!

Heather from Black Hawk Sportfishing reports another strong week of the same summer fishing they’ve seen for a while Their daily bottom fishing trips have shown excellent porgy fishing, a nice mix of sea bass, and quite a few triggerfish. The fluke fishing has gotten a bit tougher, but there are still a few nice ones here and there. The After Work special trips continue to be strong, with huge bluefish and plenty of stripers in the mix. The fishing had gotten a bit tougher around the big full moon, but things are getting back to normal. They will continue to add as many of these trips as they can, but they fill up fast, so be sure to grab your spots as soon as you see them posted. They will continue to run two trips on Saturday’s and Sunday’s and will keep fishing every weekday. They also are starting to book private charter trips into September, along with some Sunday afternoon bass/bluefish trips. The timing of a few trips also changes in September, so be sure to check their website for the exact schedule and to book a spot!


Captain Mike Roy at Reel Cast Charters reports that things are starting to shape up nicely for the fall run. There are huge masses of small bait, with bass and bluefish chasing them all over the surface. There are plenty of big bluefish on the reefs and plenty of big bass in the same areas, especially during the low light periods of the day. There are some rumors of hardtails to the east, but we’re still probably a few weeks away in Mike’s neck of the woods, but the water temperatures and bait supply are lining up nicely. The sea bass bite has been improving and should only get better as the water temperatures slowly drop. Be sure to give Mike a call to book a fall run trip before it’s too late!

Chris, at Elser Guide Service had an excellent weekend fishing the WICC bluefish tournament with his grandson Colton. They held 1st place until late Saturday with a 15.16-pound gator and managed to take 3rd place for the whole tournament. Fishing has been fantastic for big bluefish, as they landed about a dozen over the double-digit mark. The striped bass bite has been a bit quieter in the area due to the recent winds, but there have been some good numbers of Spanish Mackerel.

Fisherman’s World in Norwalk reports that the whole area has been loaded with bluefish from the islands to the usual deepwater structure. Diamond jigs have been the most consistent lure presentation but trolling the tube and worm has accounted for some large ones as well. Most of the striped bass in the area are in the school to slot-class, although a few larger bass have been falling for chunks during the low-light hours. The sea bass fishing has started to pick up a bit in 50+ feet of water, while the porgy fishing remains lights out for both shore and boat anglers. Fluke reports remained solid this week for anglers fishing around the large bait clouds in 30- to 40-feet of water. Spanish Mackerel remain in the area, but there have been no new reports of any other funny fish showing up.

Connecticut waters have no shortage big striped bass, but the big fish remains a low light/nighttime bite. Fishing after dark has worked out well for those that are doing it, with some big striped bass being reported from CT surfcasters and anglers drifting eels on the shallow reefs. The resurgence of bluefish also continues, with strong reports of 12- to 15-pound fish from Norwalk to The Race that are eager to hit diamond jigs or trolled tubes. There is also no shortage of snapper bluefish in our tidal rivers and tribs. Bonito and false albacore remain just a rumor, but we shouldn’t be too far away from some confirmed reports. Local surfcasters are also starting to find better results from Groton to Niantic. Fluke fishing seems to have improved this week, with better reports from throughout the state, but the sea bass action has gotten tougher and is dominated by shorts. The blue crabbing has also been very strong in the lower CT River tribs and the Western Sound tribs for those looking for a nice change of pace closer to home.