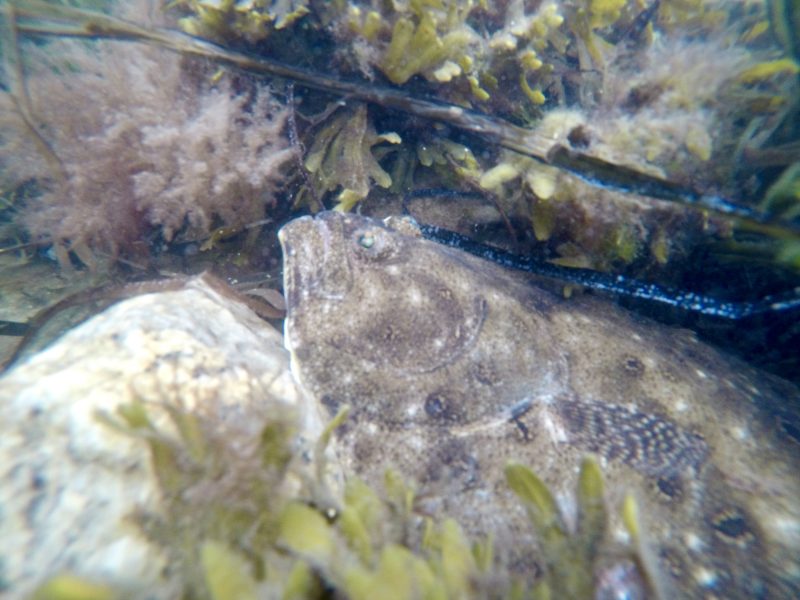 Above: A fluke camouflages into a rocky, vegetated reef awaiting it’s next meal to sweep past in the current. (Photo by Matt Haeffner)

The fishing scene has exploded both inshore and offshore as we near the end of August.  The fluke (or summer flounder) bite remained on fire over the past week at the inshore reef sites up and down the coast.  Fish to 8 pounds and higher have hit the scales at the local tackle shops with most anglers reporting excellent action.  The bays have quite a few shorts to keep the rods bent, but the ocean has the keeper ratios much better.  Offshore fishing remained hot at the canyons with good amounts of tuna being weighed in for local tournaments and some nice mahi caught at the offshore pots.  Surf anglers are finding cooperative fluke, blues, and some big rays.  The southern parts of our area have been giving up better numbers of weakfish, especially during the evening tides.  Look for bay weakfish on live peanut bunker in the coming weeks.

Hook House Bait & Tackle in Toms River reported excellent northern puffer fishing in all parts of Barnegat bay from Toms River to Manahawkin.  The puffers have been on the bite with clam chum and cut clam working.  The shop is loaded with baits and two-hook rigs.  Fluke fishing has been good off the ocean surf, ocean reefs, and at the inlets.  Some nicer fish to 8 pounds have landed.  Offshore action has been solid at the canyons for tuna, marlin, and some wahoo.


Lacey Marine in Forked River said it’s “puffer madness” as there were 50 boats between the “BB” and “BI” over the weekend and the bite was on.  Some anglers reported up to 100 blowfish for an hour of work.  Clam chum is a must to bring them in and keep them biting.  Fluking has been tougher for most as the channels have been in-undated with lots of shorts, but there has better keeper action near the inlet.  The ocean fluke bite has been on at the GSN and GSS reef sites for anglers making the run south.

Jerzey Buoyz Sportfishing took a ride out to the deeper water to find some nice yellowfin action.  The crew will begin some of their fluke trips over the next several weeks.

Creekside Outfitters in Waretown had a few nice fish weighed into the shop this past week.  Fluke have been caught around the inlet and some of the inshore reefs.  Anglers working green crabs have found some cooperative tog at the inlet rocks.  Puffer fishing has been epic in Barnegat bay on clams and cut squid.

Reel Reaction Sportfishing out of Waretown was on the meat again this week as the skipper boxed over 50 keepers both bay and ocean fluke.  Some trips have had keepers to 8 pounds on jigheads tipped with Gulp baits.  Most trips have been averaging 7 to 12 keeper per 4 and 5 hours of fishing.

The Super Chic out of Barnegat Light continued to work the bottom area for sea bass, fluke, ling, and some bluefish.  There has been some nice tuna caught on the mid to canyon areas.  The skipper has some dates remaining, so give them a call.

Tony’s Bait & Tackle in Manahawkin had good fluke fishing south of Holgate inlet and at some of the reef sites.  Big gulp and bucktails to 4oz have been the hot ticket.  The bay bite has been better on spearing and live peanut bunker.  Some nice sharks have been caught of the LBI beaches at night.  The crabbing has been good along the back-channels and marshy areas with bunker.  The surf fishing along LBI has been productive on double hooked rigs for some spot, kingfish, and small blues.  Beach fisherman have been catching some fluke off the northern and southern ends of the island.

Tackle Direct in Egg Harbor City had excellent reports of fluke at the reef sites and ocean wrecks as the water temperatures have increased.  The inlets also have some numbers of keepers along with lots of shorts.  Canyon action has been the hottest ticket with lots of tuna and mahi being caught on trolled spreader bars and ballyhoo.

Tight Lines Bait & Tackle in Somers Point weighed in some nice wahoo and mahi over the past week.  The offshore scene has been hot for tuna, wahoo, and mahi.  Inshore fluke were hitting at most of the inshore wrecks.  Meanwhile, the bay, bridges, and inlet has been hot for weakfish on shedder crabs.

Badfish Charters in Ocean City reported decent fluke fishing as of late as the ocean has come alive with biting fish.  The skipper has been running ocean trips as well as targeting bay species including weakfish, sheepshead, and blues.

The Cape May and Wildwood areas had a decent bite on fluke over the past week with the reef sites providing excellent action on some nicer fish up to 7 to 8 pounds.  The beaches have been providing nice action on flounder, blues, and small weakfish.  Mahi and tuna at the canyons has been excellent with lots of action for anglers making the run.  The bridges and rocks have some tog and sheepshead for anglers working crab.

The best bet for the weekend will be to hit the inshore reef sites for fluke and the ones closer to the inlets are good places to start.  Flounder have begun to stage and start to move out to the closer inshore sites.  Inlets are another good place to target fluke during this part of the season.  Big baits such as 6-inch Gulp, live peanut bunker or bluefish are good baits to put keepers in the box.  If the seas permit, the midshore ridges are excellent spots for small tuna, mahi, and bonita this time of the season.  Anglers looking to stay on land should work the jetty rocks or bay bridges with green crab for keeper tautog.  Good Luck, Be Safe, and Tight Lines!