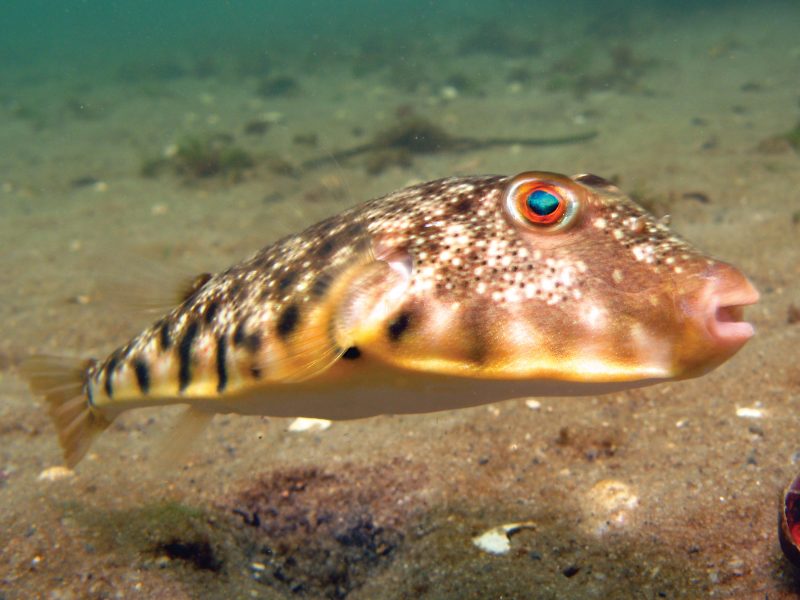 (Above) Northern puffers, also called “blowfish” or “pufferfish”, are tasty and plentiful throughout southern Jersey’s back bays.

The fish have been on the feed coming off the recent full moon, as yellowfin tuna at the offshore canyons was on fire this past week.  Anglers carefully checking the pot markers have also found mahi with chickens and bulls in the mix.  Ocean fluke fishing has been better with the recent winds, but the challenge has also been the winds and current.  The fish are there and hungry, but the drift conditions are just too fast.  Wind socks and power drifting have been the best ways to encourage a bite from the flatties.  Beach fisherman had a great week with lots of variety coming in and extreme south jersey had lots of croakers, flounder, spot, and weakfish being landed off the beaches.  Something lit the blowfish fire this past week as the Barnegat bay had an epic bite with catches going as high as 100 per hour!

Hook House Bait & Tackle in Toms River reported a solid flattie landed off the beaches of IBSP and the fish weighed 9.55 pounds as indicated by another shop in the area.  The Manasquan River is also producing some nice ones up to 7 pounds.  Bucktails or jigs tipped with Gulp, mullet, or peanut bunker are working the best. Blowfishing has been excellent in Barnegat Bay with the best action coming from areas away from the inlet flow.

Lacey Marine in Forked River said it was a blowfish bonanza this past week lots of clam and clam chum exiting the doors of the store.  Anglers reported excellent blowfishing between the “BB” and “BI” buoys.  The offshore bite continued its hot streak with the southern canyons producing excellent yellowfin and mahi.  Weakfish have been hitting on the top of the tides along certain sedges or marsh in Barnegat Bay.


Jerzey Buoyz Sportfishing took the past week off from chartering as the skipper spent some time with the family off the water.  They will begin fluking inshore in the coming weeks and the crew has dates available.

Creekside Outfitters in Waretown reported some nice fluke being landed just outside the inlet and around the lighthouse area on live peanut bunker, bluefish, and jigs tipped with Gulp.  It’s been solid blowfishing for anglers working the “BB” to 42 markers with even some spot, weakfish, and kingfish in the mix.  Offshore action at the Baltimore and Wilmington produced excellent quantities of yellowfin and mahi this past week.

Reel Reaction Sportfishing out of Waretown has been working both sides of Long Beach Island with trips in the bay yielding up to 15 keepers per charter.  The ocean trips have fared less due to the recent full moon currents and winds, but better on quality with a solid 8 pounder caught this past week.  The crew is prepping for September and October night striped bass fishing with 3 hour slots available.

The Super Chic out of Barnegat Light continued to split charter time between bottom fishing and offshore tuna hunting.  Fluke, sea bass, and some blues have been landed on the bottom fishing trips while the boat found a pile of yellowfin close to the canyons.  The crew has some dates available, so give them a ring.

Tony’s Bait & Tackle in Manahawkin had great reports of blowfish in Barnegat bay on clam baits and clam chum.  Some anglers have been keeping up to 200 per session as they will freeze well.  Crabbing has been excellent along the back marshes from Manahawkin to Forked River.  The offshore scene was also off the hook the past week with lots of yellowfin and some bigeyes being caught in the middle to southern canyons.  Fluke fishing picked up a tad at the reef sites with some of the southern sites (AC, Little Egg) producing better.

Tackle Direct in Egg Harbor City had excellent reports of fluke in the back waters with most able to pick a few keepers.  The deeper channels have been the spot to be and most baits are working.  There are plenty of peanut bunker and minnows around as the bigger fish have been preferring these baits.  Offshore, spreader bars, chunking, and jigging worked in the canyons this past week.  Weakfish are around the bridges during the night while sheepshead and tautog maraud crab baits during the day.

Tight Lines Bait & Tackle in Somers Point recently received a fresh shipment of green crabs and sand fleas as the tog and sheepshead bite has been very good off the jetties, piers, and rocks.  The main channels closer to the inlets are providing some nice action for flatties up to 5 pounds on live bait and Gulp.

Badfish Charters in Ocean City reported another solid week of fluke fishing off the ocean grounds and the nights in the bay are showing good signs of striped bass.  The skipper said he will resume targeting stripers when the waters begin to cool in September, so give him a ring.

The Cape May and Wildwood areas were the hot zone for pelagics this past week and weekend.  A good number of offshore battlewagons hit the grounds to find lots of yellowfin, bigeye, and some mahi around the pots.  The consistent NE winds pushed some mahi and cobia in closer to shore for some working the nearshore wrecks.  Bay action in Cape May and Wildwood was good for crabbers working hand-lines and “topless” traps by boat.  The surf line produced a nice variety of species.  Flounder, bluefish, croaker, kingfish, and even spot with most hitting bloodworms and squid.

The best bet for the weekend will be to hit the wrecks for ocean fluke or to hit the offshore canyons as the yellowfin bite is ultra hot.  The inshore wrecks are prime areas for large fluke up to 10 pounds with bucktails tipped with large squid or Gulp.  Vertical jigging or casting opposite of the drift direction and working the bucktail back tends to produce good keepers.  The key is finding areas of feeding fish.  The Baltimore and Wilmington canyons were the top spots to hit if you have the means with the western edges producing lots of yellowfin.  If you can’t make the long offshore trek, grab the blowfish gear as Barnegat Bay has been on fire with blowfish the past week and the bite should continue into September!!  Good Luck, Be Safe, and Tight Lines!