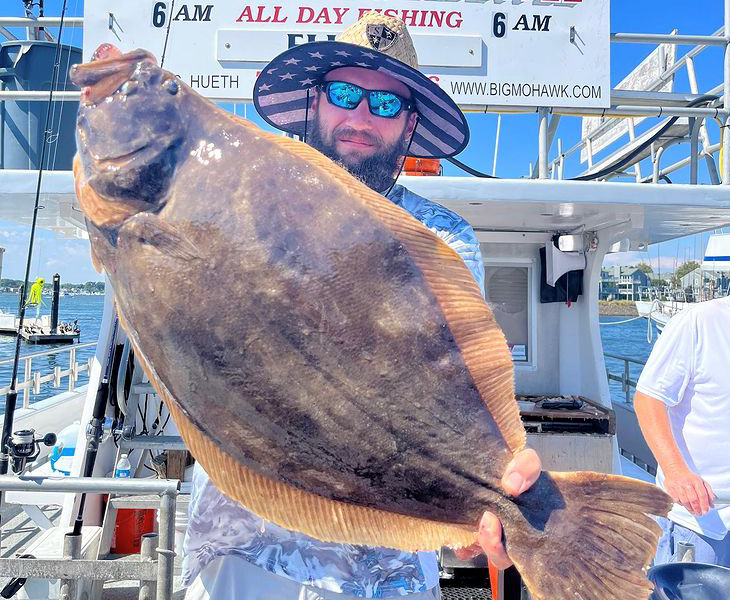 (Above: Rob Falkenstein caught this 13-pound, 12-ounce doormat fluke while fishing aboard the Big Mohawk out of Belmar last Saturday.)

It’s what summer anglers dream about — great fluking in late August. Reports of more and bigger fluke are coming in from all quarters with limits on the boats and from the beaches.

Rick Hebert at Tackle World in Rochelle Park said he’s been hearing nothing but good news on the fluke front lately. Big fish have been reported from the Rockaway Reef, Robbins Reef, the Farms and other popular spots. Tuna fishing, on the other hand, has been tough. It’s still very hit or miss and anglers have to be ready to spend the time and fuel with a good chance they’ll be disappointed. Freshwater fishing has been frustrating as well with high temperatures and low water levels hampering the bite.

Patrick Sciortino at the Tackle Box in Hazlet said all the party boats out of Atlantic Highlands are reporting excellent fluking. Rough bottom spots are giving up some big fish. Fluking has also been good off the beach at Sandy Hook with the surf at Parking Lot C an especially productive spot. He also reported excellent porgy fishing at the Keansburg Pier and the by the Coast Guard Station on Sandy Hook. There’s plenty of snappers in along the Bayshore as well.


Mike Pinto at Giglio’s Bait and Tackle said there’s a lot of fluke in the surf there and they’ve finally got some size to them. Peanut bunker are off the beaches and providing forage for the fluke. Pink shine and white Gulp have been popular colors for surf anglers. He also reported bluefish blitzing in Sea Bright and Monmouth Beach earlier this week. The fish were in the 4- to 8-pound range. Crabbing, he added, remains very good in the Shrewsbury and Navesink rivers.

Mike Gleason at TAK Waterman in Long Branch said bigger fluke are showing up in the surf there and Gulp and bucktails are catching them. Tuna fishing is still a struggle, he said, but there are fish around. The trick is finding them. He did mention that there seem to be more bluefin showing up.  More anglers are targeting cobia, Gleason added, catching them on live bunker, eels and mega shads. Fluke fishing has definitely improved for me in the surf, drifting live killies in the cuts and close to jetties. Bluefish and Spanish mackerel are also popping up from time to time.

Bob Matthews at Fisherman’s Den in Belmar said the party boats out of the marina are all doing well fluking lately. Last Saturday, the Big Mohawk was doing the best of all when Rob Falkenstein landed a 13-pound, 12-ounce monster. This catch comes just a few weeks after the Big Mohawk recorded another 13-pound fluke. Matthews also reported that the Ozark Sportsmen Club’s annual fluke tournament that was held last weekend saw a number of big fish come to the scales. A 9-plus-pounder took top honors. Fluking is still good in the Shark River, he said, and there are blackfish, blues and some Spanish mackerel at the inlet.

Capt. Jay Richardella of Side Job Charters out of Belmar said he’s still catching loads of bonito. His most recent charter caught close to 40.  He also reported bluefin as close as 10 miles out. He’s got openings to target those species along with sea bass, mahi-mahi and Spanish mackerel. Contact Side Job Charters through the website.

Capt. Pete Sykes of Parker Pete’s Sportfishing out of Belmar reported a great day on the fluke grounds on Wednesday with fluke limits around the boat along with plenty of sea bass. His next open boat trip is this Friday leaving at 6 a.m. You can call or go online to reserve a spot. There will also be a night bluefishing trip on Saturday and there’s still a few places available.

Capt. Steve Spinelli on the Skylarker out of Belmar reported good fishing for fluke, sea bass and cod. The pool fish for fluke averages about 5 pounds every day. He’s also been targeting ling in deeper water.

Lloyd Bailey at The Reel Seat in Brielle said the mid-shore tuna bite is still pretty inconsistent but those folks heading to the Hudson or Toms canyons are being rewarded with some nice fish. The mahi fishing has been good in both places. He said the fluking has been very good on the sticky bottom at the Shrewsbury Rocks and there are still nice fluke in the Manasquan River.

Kyle Tanger at Fishermen’s Supply in Point Pleasant Beach said the fluking really heated up in the last week with the Sea Girt and Axel Carlson reefs producing plenty of big fluke. The Manasquan River is also giving up keeper fluke along with schoolie bass. The striper fishing is best at night around the bridges and docks on small plugs and plastics. Blackfishing in the Point Pleasant Canal is excellent, he said, especially in terms of numbers. You have to catch your share of shorts to get to the keepers. Green crabs and jigs are working. Tuna is a toss-up but the mahi fishing is more consistent, he said. They can be found anywhere from 5- to 25-miles out. Tanger said the fish have been a bit hesitant to eat but small Gulp swimming mullets on a jig has been getting them to strike.

Chris Parlow at Capt. Bill’s Landing in Point Pleasant Beach said the fluke fishing has been excellent the last two weeks with many limits being reported and fish up to 9 pounds being caught on the local reefs. Sea bass fishing continues to be good as well. He said the Manasquan Inlet and the river continue to produce fluke and bluefish. He, too, said the inshore tuna bite is inconsistent, but there are some large mahi around for those that want to go pot hopping.

Capt. Danny Gregory on the Norma K III out of Point Pleasant Beach said the fluke fishing has definitely picked up with approximately 50 keepers coming over the rail on Wednesday’s trip.  He was fishing the Axel Carlson Reef and said there was plenty of life around as the water temperature has reached 75 degrees.

Frank Giacalone at Gabriel Tackle Co. in Brick said Point Pleasant Canal is giving up plenty of blackfish with some triggers mixed in. Barnegat Bay has plenty of fluke around the Mantoloking Bridge and there are blowfish down at the BI and BB buoys. He said surf fishing on the local beaches remains good with reports of blues on mullet and fluke on bucktails and teasers.

Pete Kupper at Charlie’s Bait and Tackle in Normandy Beach said overall fishing is good with nice fluke being caught off the beach and in Barnegat Bay. Lisa Schardien landed a 22-incher in the local surf earlier this week. Fluking has really picked up in Double Creek Channel as well, he said. Stripers are in the surf hitting clams and worms, blowfish and snappers are biting in the bay and the crabbing has been very good in there as well. The only thing missing, Kupper said, are the bluefish.

Ray Kerico at Grumpy’s Bait and Tackle in Seaside Park said it’s still excellent fluking in the surf there with a lot of 4- and 5-pound fish being caught. A one-ounce bucktail, he favors S&S, and a teaser hook above is the preferred rig. Both bucktail and teaser are tipped with Gulp. Barnegat Bay is holding a lot of spot and blowfish and there are tons of crabs, he said. There is also an enormous amount of bait — peanuts, mullet and spearing — building up in the bay, which is always a good sign ahead of the fall run.

Obviously, it’s time to go fluking. Reefs, rocks and wrecks are all giving up plenty of big fish while the beaches are holding loads of smaller fish with keepers to be had. Gulp and bucktails are working from the boats and the sand. Live killies are also working for surfcasters.

Fluking in the bays and rivers is also holding up and those other summer favorites, snappers and crabs, can be found in there as well.