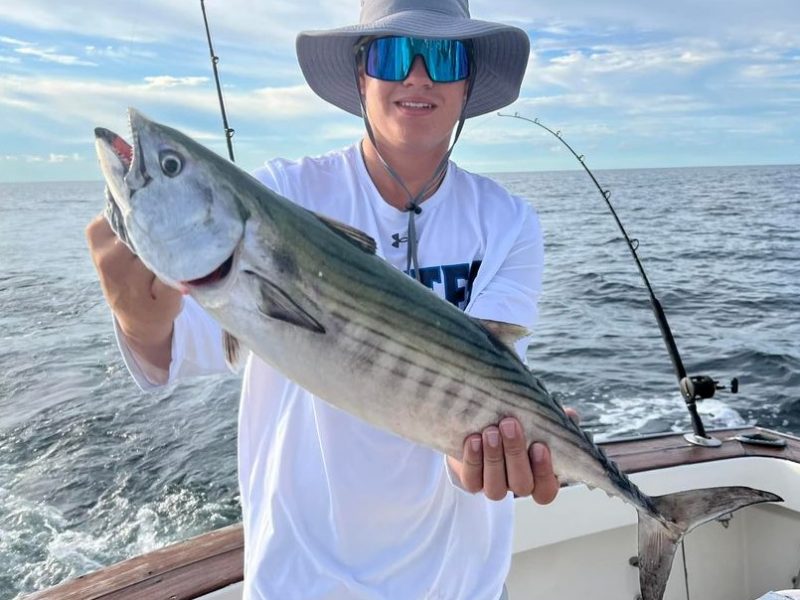 Fishing is as it should be for this time of year. Boaters are catching more and bigger fluke, schools of blues are popping up off the beaches and crabs and snappers are in rivers and bays. Spanish mackerel and bonito are also being caught as are triggerfish, cobia and kingfish.

The tuna bite has been a bit inconsistent, but those willing to put in the time and fuel are finding yellowfin and a few bluefin.


Mark at Tackle World in Rochelle Park said they received good reports on fluke this week from the boats while blackfish anglers are doing well at the inlets. He also heard of blues at the tip of Sandy Hook for those willing to take the long walk. Freshwater fishing has been good, he added, before the heat of the day shuts things down. There’s lake trout at Round Valley, smallmouth bass at Merrill Creek Reservoir and walleye at Monksville Reservoir at night.

Capt. Phil Sciortino at the Tackle Box in Hazlet said anglers are still catching plenty of fluke in the surf floating killies under a bobber. More bait has showed up just off the beach, he said. He’s also been hearing that cobia have become a favorite target with boaters livelining bunker for them. Crabbing is good around Raritan Bay and the snappers are in there as well.

Mike Pinto at Giglio’s Bait and Tackle in Sea Bright said there are a lot of fluke in the surf but, unfortunately, most are small.  There’s a keeper now and then, he said, but it takes a while. There was a shot of blues on the beach on Monday with fish in the 4-pound range. Off the beach, boaters are doing well with fluke and triggerfish. Crabbing remains good in the Shrewsbury and Navesink Rivers.

Mike Gleason at TAK Waterman in Long Branch was among the very few anglers who got one of the big inshore bluefin to bite. He landed a 352-pound giant after it hit a Hogy paddle tail. The bluefin and yellowfin are now pretty far out, he said, and it’s still a hit or miss proposition. There are big albies mixed in with them and hopefully they’ll move in before too long. Beach anglers are still doing well with fluke, he said, and there are schoolie stripers around along with bluefish. Schools of blues have been popping off the beaches in Asbury Park and Ocean Grove. There’s been plenty of bunker and smaller bait off the beaches as well. All of the fluke I’ve caught have been shorts.

Bob Matthews at Fisherman’s Den in Belmar said fluke is the best game in town at the moment. The biggest fish of the season so far was the 13-pounder that came off the Big Mohawk. The Capt. Cal II and Ocean Explorer have also reported some nice catches in the past week. Matthews said the good fluking in the Shark River continues and it’s getting better in the surf. Stripers are in the back of the river eating mullet, spearing and peanut bunker. Small blues and Spanish mackerel are showing at the Shark River Inlet at random so if your timing is right, you can get in on the action.

Capt. Pete Sykes of Parker Pete’s Sportfishing out of Belmar reported excellent fluking on Monday’s open boat trip. A nasty northeast wind kept a lot of boats at the dock on Tuesday and Wednesday. Capt. Sykes will be sailing open boat trips next Monday, Wednesday, Friday and Saturday.

Capt. Steve Spinelli on the Skylarker out of Belmar had a good week of fishing despite the wind. Monday’s trip saw a lot of keepers come aboard including two fluke of 6 and 7 pounds. Sea bass are filling out the catches.

Capt. Jay Richardella on Side Job Charters out of Belmar said he’s been beating up on bonito. Monday’s trip saw about 30 of the tasty fish come over the rail along with a few jumbo Spanish mackerel and some sea bass. Capt. Jay has openings for offshore and inshore trips and can be contacted through his website.

Jim Sweeney at The Reel Seat in Brielle said there are yellowfin in mid-shore waters but it’s been hit or miss. They’re in the canyons as well along with tilefish and swordfish. He said fluking has picked up on the local reefs in the past week.

Kyle Tanger at Fisherman’s Supply in Point Pleasant Beach said the Manasquan River is blanketed with peanut bunker. The fluking has been very good and a number of charter boats have been sticking to the river, especially with the high winds earlier in the week. Stripers are in the river as well, feeding on all the peanuts. Tanger said stripers are also in the surf, hitting small plugs and twitch baits. Tuna fishing has been tough, although he did get reports of a few yellowfin at Little Italy. He added that the mahi fishing that was pretty good last week has fallen off a bit.

Capt. Danny Gregory on the Norma K III out of Point Pleasant Beach reported excellent fluking on Monday’s trip with about 50 keepers and an 8-pounder taking the pool. Tuesday’s trip was blown out and Wednesday was a slow pick in the big swells left over from all the wind.

Capt. Kenny Namowitz on the Mimi VI out of Point Pleasant Beach said the fluking has been good and he’s been finding the fish at different places at different times of the day. Some days they are just off the beach and others in deeper water. He said black sea bass are plentiful and there are blues and mackerel around.

Frank Giacalone at Gabriel Tackle in Brick reported that Barnegat Bay fluking remains good with fish around the Mantoloking Bridge and the mouth of the Point Pleasant Canal. Fluking is also good on the local reefs and wrecks with the Axel Carlson the better bet. Farther north, the Shrewsbury Rocks and spots of Long Branch and Deal are giving up some nice fish.

Pete Kupper at Charlie’s Bait and Tackle in Normandy Beach said fluke fishing is holding up in the surf and there are Spanish mackerel and bluefish popping up off the beaches. There are a lot of sharks around as well and the cownose rays are making things interesting for surfcasters. The bay has snappers, crabs and blowfish.

Ray Kerico at Grumpy’s Bait and Tackle in Seaside Park said the fluke fishing in the surf is the best thing going on there. On Tuesday, the shop weighed in a 9.55-pound fluke caught by Mike Wujek off the beach on Gulp.  It’s the catch of the year — so far. Surfcasters are also getting blues on mullet and metal. Crabbing has been good in the bay and there are blowfish around, just not as many as last year.

There’s solid summer fishing right now with fluke on the beaches and from the boats. There’s a little more than a month left in the summer flounder season and the bigger fish are in for a late summer push.

The beaches are also offering blues, bass and Spanish mackerel while the rivers and bays hold summer favorites like snappers and crabs. Enjoy.