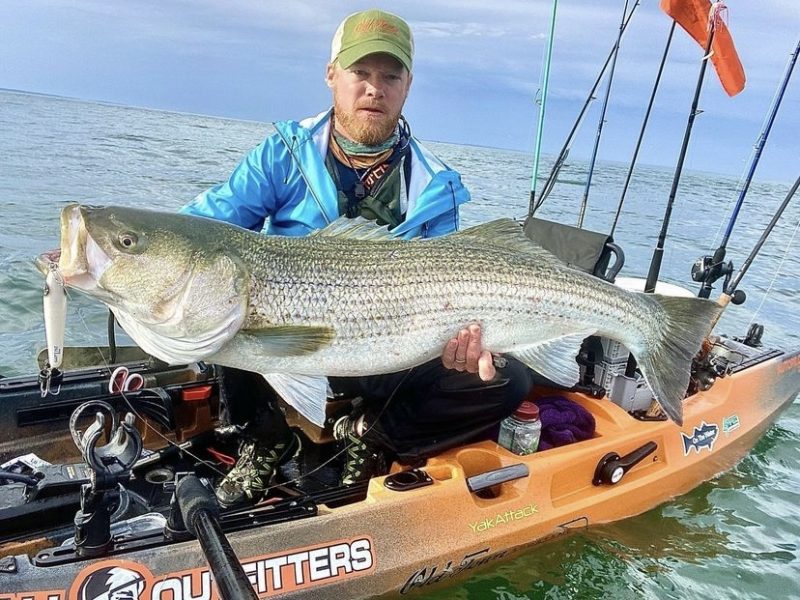 (Above) Matt Stone with his second personal best striped bass of the summer at 48 inches; an inch longer than his prior personal best. (@sunrisekayakfishing)

Matt, at Black Hall Outfitters in Westbrook told me there was still some great striper fishing on the local reefs and points during the new moon phase and into this week. School bass feeding on rain bait on the surface can be found most days, and they can be easily caught on small topwaters and epoxy jigs. The bigger bass are still hanging on the nearshore reefs, but they have been more active after the sun goes down. Drifting live eels or casing GT eels over the reefs and rockpiles have both been safe bets when targeting big bass after dark. The chub mackerel have invaded the Central Sound, but don’t mistake them for false albacore or bonito, which haven’t arrived just yet. Fluke fishing has been consistent enough to make it worth your while, with the best catches coming from 60-80-feet of water. The sea bass have thinned out locally, but if you’re willing to burn some fuel, the late summer sea bass grounds are still holding some good fish.


Heather from Black Hawk Sportfishing reports another strong week of the same summer fishing they’ve seen for a while Their daily bottom fishing trips have shown excellent porgy fishing, a good mix of sea bass, and a couple more quality fluke. The After Work special trips continue to be very strong, with huge bluefish and plenty of stripers in the mix. They’ve added a few Thursday After Work trips, but they are filling up fast, so be sure to grab your spots as soon as you see them posted. They will continue to run two trips on Saturday’s and Sunday’s and will keep fishing every weekday. They also are starting to book private charter trips into September. Be sure to check their website for the exact schedule and to book a spot!

Captain Mike Roy at Reel Cast Charters reports that the striper fishing is still very good, but they have become a bit finicky following the latest heatwave. When they get tough to fool with an artificial lure, a fresh live bait has been the ticket. This week has seen a good number of large striped bass falling for live eels, bunker, and large soft plastics. He is starting to see some better topwater feeds, but they tend to be small striped bass and/or chub mackerel. As we progress through August and into September, we should start to see the prevalence of topwater feeds increase. Big bluefish remain in the mix, and they are running anywhere from 12- to 15-pounds. There is plenty of small bait throughout the sound, so the fall run should be strong. Be sure to give Mike a call to plan your trip today!

Dan, at Dan’s Bait, Tackle, and Charters in New London reports that it has been a beautiful time to be on the water in his neck of the woods, despite the recent scorching heat. Striped bass have moved into deeper water during the day but could still be found in the shallows after dark and/or on the cooler incoming tides. Casting topwater plugs, Daiwa swimmers, and tins have been productive when you find some bass working the surface, while drifting/casting eels remains the proven method on the deeper reefs or along the shoreline after dark. Shore bound anglers are reporting good catches of bass along the local rocky shoreline, and from the piers on eels and fresh chunks. There have also been some quality bluefish in the mix that will tear up an eel but won’t turn down a chunk. The sea bass are still chewing clams and squid, but you may have to weed through some shorts, scup can be found just about everywhere, and the summer tautog action has been good for those that are targeting them. Dan will continue to have green crabs in stock until the 30th!

Chris, at Elser Guide Service told me that he is still catching 20- to 45-pound bass on the troll regularly, but the big news this week is that the Spanish mackerel have started to show up. Chris expects the numbers of macks to improve by the weekend, and that is usually a sign that the bonito aren’t too far away! Time to get the Exo jigs and 5-inch Duratech plastics ready, which both tend to be top producers for the hardtails.

Fisherman’s World in Norwalk reports that the fishing has remained strong despite the heat, but live bait is playing a key role. The chunk bite has slowed down dramatically, but live-lining bunker over structure is still producing some quality bass. There is decent topwater bluefish action early and late in the day, otherwise look to drop a diamond jig or flutter spoon. Bottom anglers have been focusing on porgies, and the bite has been good for both shore and boat anglers dunking sandworms and squid. Fluke fishing hasn’t been lock and load, but things haven’t been too bad, with some fish in the mid 20-inch range being taken from 30- to 40-feet of water. The same can be said for sea bass, which are showing up in the same areas. The blue crabbing has been going very strong, with easy bucket-fulls for those looking for crabs during the day or after dark. Just a reminder, the shop is a weigh station for the bluefish tournament next month and they have the sign-up sheets and t-shirts in now.

The extreme heat wave is back, but the summer fishing patterns remain steady. For a moment, the heat wave seemed to slow down the striper fishing for the first time this year; but better reports are starting to trickle in for Rhode Island and Connecticut anglers. Bottom fishing has hit its summer pattern, with slower but steady results, while the offshore bite was starting to materialize before the recent blow.

Connecticut waters have no shortage big striped bass, but the fish do appear to be transitioning to their summer haunts on the deeper reefs and rips. Fishing after dark has worked out well for those that are doing it, with some big striped bass being reported from CT surfcasters and anglers drifting eels on the shallow reefs. The resurgence of bluefish also continues, with strong reports of 12- to 15-pound fish from Norwalk to The Race, and at most spots in between. Local surfcasters are also starting to find better results from Groton to Niantic. Fluke fishing isn’t exactly lights out, but anglers working the eastern Sound reefs are reporting some of the best results in a few years. There is no shortage of sea bass and scup, with the latter showing up in better numbers for shore bound anglers. Connecticut’s summer tautog season has remained fruitful for those that are targeting them. The blue crabbing has also been going very strong in the lower CT River tributaries and the Western Sound tributaries for those looking for a nice change of pace closer to home.