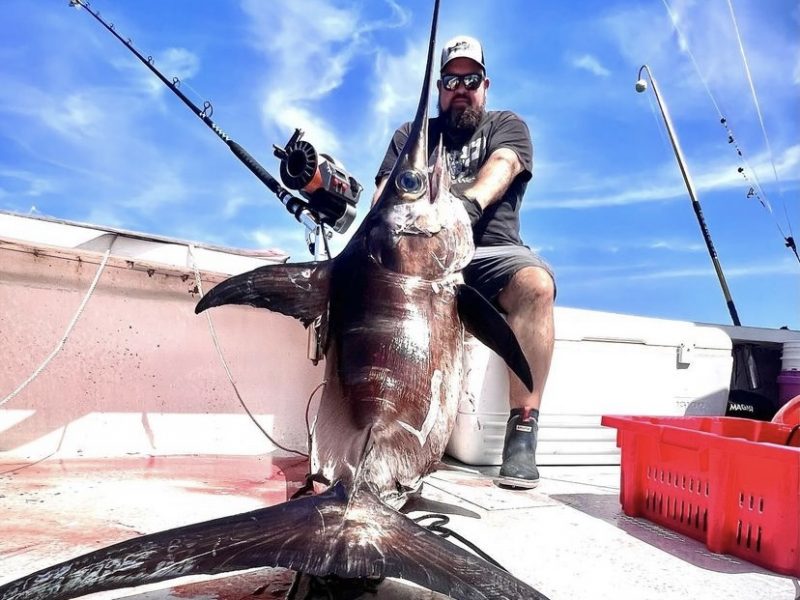 Transition. Any fisherman worth his weight in bass knows that fishing is a constant ebb and flow of rhythms. The instant you find that rhythm, you enjoy the monumental bliss of hard-earned success. However, the fleeting regularity of fishing can all be gone with one wind, one tide, one hatch, one moment. Therefore, fishermen must be masters of transition and adaptation.

As August turns to September and summer turns to fall, Cape Cod’s marine biomasses will change behaviors and locales; while some species will even bid an “Irish goodbye”, others arrive with renowned force. We got our first taste of the Fall run this past week, as a cold front and stormy weather dislodged the comfortable summer fishing routines of many. North winds and a turn of the knob on God’s air conditioner ended the party for Plymouth striper seekers. With the closing of a bite some captains affectionately dubbed “Sea World”, come improvements in other areas. Peanut bunker have arrived in mammoth schools along the south shore and Buzzard’s Bay, stirring up schoolies and blues. The Canal sputtered with a fall run preview this weekend and bonito are being caught sparingly near the Islands. Before we know it, the Cape will be enveloped in an autumnal frenzy of bluefish, bonito, albies, and fattening stripers.


As is often the case for anglers, transition begins in the ocean and ends in the fisherman. This report marks my last as an OTW intern. It has been both an honor and a pleasure to have served in the difficult position of fish forecaster. Which, sort of like weather forecasters, deal mostly in rumor and become notably prominent upon mistake. It has been a dream since my youngest days galivanting across Nauset Beach to spend a full summer working and living on Cape Cod. For years, my student athlete endeavors prevented this dream and restricted my galivanting to the weight room and lacrosse field. This summer with OTW, I shifted my focus to reigniting my love of the Cape and the rich fisheries that surround it. Being a landlocked New Jerseyan, my angling heart is miles happier on the Cape with crystalline kettle ponds and dune-speckled beaches minutes away from home. But the time has come for me to make my (hopefully ultimate) annual migration back to the classroom. In a few short weeks, I will begin my final year at Trinity College in Connecticut, where I plan to write and fish my way toward that all-so-valuable piece o’paper.

But before my departure from Cape, I had to wet a line in this windy weather just one last time. OTW’s Matt Haeffner and I sneaked out on the flats again in search of a few keeper fluke after work. We fished hard through a fast-moving outgoing tide and heavy winds on the south side of Cape, and were rewarded with a couple of short fluke. The key to finding these fish was to locate a trough or deep channel alongside a sandy flat; the fluke sat in deeper water, waiting for small baitfish to be swept over the flat with the current. They sit camouflaged on bottom and wait for their dinner to drift overhead, which allows them to conserve energy and maximize return.

Surprisingly, fluke weren’t the only ones enjoying our offerings. Matt hooked a healthy school striper on his fluke rig, which took a surprising amount of line by using the outgoing tide and wind current to its advantage.

Despite a slight temperature drop and a major shift in wind direction this week, fishing has been good if you can locate calmer waters. Bright colored lures seem to be key in grabbing the attention of any predators in the coffee-colored back bays. This weekend, as I pack up my gear, Captains around Cape hope for the wind to lay down a bit. While On The Water readers have not seen the last of me yet, the Cape’s tackle shops and charter captains might have. Here’s the scoop from our local captains, tackle shops and anglers going into the weekend:

The Canal is heating up just in time for the mass exodus. A topwater revival, courtesy of cool water and small baitfish, had Canal loyalists such as East End Eddie Doherty into some monster fish: “Most of the action developed in the east end, but slots and bigger were also landed from the State Pier all the way to the Sagamore Bridge. Veteran Canal Rat Bill Walsh from Roslindale had his red and white Cotton Cordell pencil working to fool some fish near the power plant on the Cape side. Rollerblade enthusiast Marie Murray from Plymouth skated down the service road and reported on some fish that were caught near the Bourne Bridge on pencil poppers including a 43-inch and 34-inch slot on the rising east tide. Expert fisherman Joe England from Acushnet caught a 30-inch slot after his daughter Lisa reported the fish location to her dad from her reconnaissance mission on her motorized bike in search of stripers, so family teamwork paid off! John Doble landed some nice slots with his yellow Guppy JoBo during a surface bite and then the iconic angler reeled in a 20-pound striper off the bottom with a green mackerel FishLab. Zak Baker from Sagamore Beach, an extremely talented surfcaster, added a 23-pound linesider to his tally with a white FishLab on the late afternoon east flood tide.”

Canal Bait and Tackle sings the praise of their namesake waterway, reporting that bass and blues have been coming on heavy jigs fitted with soft plastics. Most of the Canal’s bruiser bass have come at night, with a handful of 40-inchers and longer being landed.

Maco’s Bait and Tackle in Buzzards Bay cites a peanut bunker boom in Buzzard’s Bay which is bringing smaller bass and blues close to shore. The cold front has chilled Buzzard’s Bay water temperatures about five degrees, enticing resident fish to feed aggressively on peanuts, bay anchovies, and other rain bait. The area surrounding the Mass. Maritime Academy has produced slots and schoolies with consistency on an outgoing tide. Small black sea bass have been inevitable in Buzzard’s Bay, devouring jigs intended for flatfish.

Patriot Party Boat out of Falmouth cites steady scup fishing westward toward the Elizabeth Islands and many hungry bluefish on their sportfishing trips to the Muskeget Channel and Tuckernuck.

Sports Port Bait and Tackle in Hyannis reports the decline of the Plymouth bite despite Monomoy holding on to slot bass and schoolies. Loads of small bait entering the area has had snapper and adult blues alike feeding under the south shore terns.

Red Top Sporting Goods informed of the Canal’s topwater action but also remarked that the jigs get it done more consistently. Last week’s moon tide has rid the south shore and Outer Cape beaches of mung, leading to easier fishing and some big stripers meeting the sand. At night, heavyweight brown sharks have been taking eels and bluefish off the south shore and the Islands.

Captain Ross of Cape Cod Charter Guys had his Plymouth aquarium bite “decimated by north winds and bluefish” which he says shooed the pogy population towards Boston. He advises anyone else looking for late summer stripers to comb the waters for a reliably large and healthy baitfish population. Regardless, he has picked up Cape Cod Bay stripers during the transition.

“It has been another week with a lot of windy weather. Again, three days of small craft advisory have forced me to reschedule trips, but we were able to take advantage of a few nice days to find some bluefish and black sea bass. On one trip, it was the sharp-eyed Dorothy Stout who spotted the flock of terns diving on baitfish. For the next hour, she and Jack, Johnny and Scarlet caught sea bass on nearly every cast. I wish I had some photos of this to share, but I was too busy unhooking fish to take any! There’s a V-shaped shoal in Nantucket Sound, that on the outgoing tide, forms a beautiful rip that reminds me of an infinity pool, with water pouring out over the edges. This has been my most consistent producer of bluefish and sea bass this season. Some folks troll the deeper water on the edges of this shoal, but I prefer to cast right into the rip with swimming plugs, topwaters and soft plastics on small jigheads. We have found bluefish there on both outgoing and incoming tides this week, as long as there is some current.”

Offshore, the tuna bite continues to produce for anglers willing to make the run; although with the sustained winds this week, there’s no telling how the bite has changed until it’s calm enough to get back out there. Last weekend before the blow, OTW’s Andy Nabreski headed offshore with Larry Backman, and they were rewarded with 3 sizable swordfish. Listen to the most recent OTW Podcast with Captain Larry Backman here.

If tiny tuners are more your “speed” (pun intended), you’re in luck. Albies showed up in numbers south of the Vineyard this week, and there are even a few scattered reports of them making it to beaches around Hyannis, South Cape, West Falmouth, and Westport. Is it safe to say that the fall run is officially underway?

It sure is disheartening to forecast a week of fishing you can’t partake in, but weather will hold up through mid-next week. A warm and sunny weekend followed by slightly cooler and overcast days should keep the train of transition rolling. Look for albies and bonito to begin populating the south side of the Cape as they filter north from the Islands. Striped bass should be headed for cooler water and abundant baitfish. Schoolies and bluefish are munching peanut bunker, bay anchovies, and spearing in back bays and estuaries. Bottom fishing for fluke, seabass, and scup should hold strong around the Islands and in Buzzard’s Bay. Snapper blues are showing up, which can be a great time on ultralight tackle, a fly rod, or with small children, as long as you are wary of their developing but nonetheless hazardous teeth. With so much rain bait in our waters, be on the lookout for large schools working their way through backwaters and beaches. Watching terns and changes in water coloration are the best ways to identify bait schools from shore on calm and clear days. You may want to shrink your offerings from behemoth mid-summer plugs to smaller, more inoffensive baits like soft plastics and swimmers. When stripers are keyed in on smaller targets such as peanut bunker, they can reject anything that doesn’t exactly match that miniscule profile. Lastly, freshwater fishing continues to pacify recipients of saltwater skunkings with largemouth and smallmouth putting on some late summer weight.