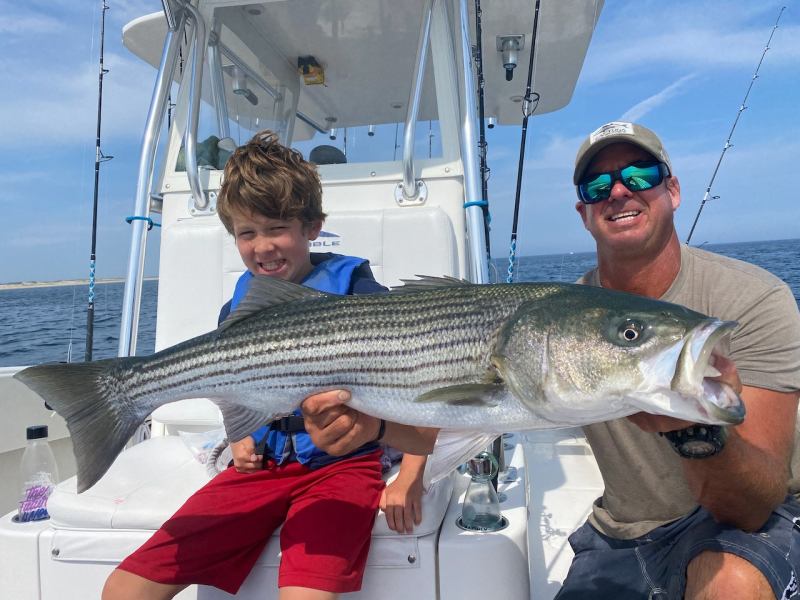 (Above) Captain Bobby Rice of Reel Deal Fishing Charters poses with a happy young angler over a beautiful striper.

Overworked air conditioners and summer storms are characteristic of early August’s idiomatic “dog days of summer”. Over the past week, water temperatures were brought to a simmer by days of pounding sun and persistent heat. In better news, a cornucopia of bait has inundated much of the Cape and Buzzard’s Bay; with peanut bunker, silversides and bay anchovies packing in, predators will be chewing hard. For now, search for fish in places that allow for more comfortable and energy-efficient feeding. These will likely be spots with higher oxygen content. Water with higher oxygen content ensures more “alert” fish which will likely be feeding heavier. Fish in bath-warm, oxygen-scarce waters will behave similarly to an undergraduate after a long night on the pints: they won’t be heading for a morning run or nutritious breakfast, but will definitely munch any greasy goodness delivered directly to their front door. For the most part, stripers are feeding lazily even around the low light hours. More ambitious fish will occupy cooler water or areas with weed beds, shade and current. All these attributes will contribute to oxygenate the water and entice fish to feed.


Last week, OTW’s Matt Haeffner and I visited one of his favorite post-work hangouts and were able to shake fins with multiple species. This particular location has a strong current and plenty of vegetation, hence the abundance of life we saw– on the ends of our lines and otherwise. Berkley Gulp swimming mullets tipped our jigs and teasers to bring in four fluke in the 14- to 18-inch range. As the sun lowered, though, the surface began to erupt. Swirls and splashes dotted the near horizon while the fluke seemed to have satiated themselves. The surface commotion made us run like giddy kindergarteners to obtain invaluable jetty real estate and haphazardly tie on the closest topwater. After many near misses and untruthful “Okay, last cast”s, I watched a fish swirl on bait and sight-casted to this healthy schoolie. It smashed a Yo-Zuri 3DB Series Pencil.

A recent influx of needlefish along the south Cape has caught the attention of any bass lingering nearby, and snapper blues are beginning to appear around pods of rain bait in our marinas. Local anglers hope that this increased activity is a sign of hardtails nearby, and with reports of bonito off of Rhode Island and Martha’s Vineyard, their long-anticipated arrival looms.

There’s plenty of action around for both bottom fishermen and topwater fanatics, but the tide and time of day seem to be the deciding factors in whether or not fish are feeding. For striped bass and bluefish, topwater poppers and spooks in the open surf or back bays should yield a few fish; but don’t hesitate to try out the bait-and-wait method with a chunk of mackerel or pogy on a circle hook. The storms earlier this week caused a wind shift, and air temperatures have been a bit less extreme since the much needed rain. This week, it will pay off to get experimental and explore some new areas as we march through August.

Whether searching for yourself or with the aid of a local captain, I recommend going off the beaten path toward less-pressured and oxygen-rich waters this week. The outcome could surprise you. Nonetheless, the knowledege of the Cape’s best captains and tackle shops are sure to help guide us through the often doldrumatic late summer heat waves.

Maco’s Bait and Tackle of Buzzard’s Bay reports that stripers are largely out of Buzzard’s and into Cape Cod Bay, who’s water temperatures measured 4-5 degrees cooler on Wednesday. The warm water in Buzzard’s Bay has been attracting tons of bait. Fluking has been consistent on the Mashpee Flats and keeper to 20-inch fish are becoming more common. South Cape Beach and other bordering beaches have seen brown sharks beached under the moonlight. Thankfully for the surfcasting crowd, bluefish don’t mind the heat and have been sticking around south-facing beaches and Buzzard’s Bay structure such as Little Bird Island and the Mass. Maritime Academy.

Red Top Sporting Goods in Buzzard’s Bay shares news of a few north-bound bonito caught on the Hooter past the Muskeget channel. For one gentleman, needlefish plugs and SP Minnows have been producing cow stripers during nighttime on the Outer Cape shores. The Canal remains a reliable spot to find slot bass, although chunk-hungry fish now outnumber those fooled by artificials.

Sports Port Bait and Tackle in Hyannis rattled off a list of dependable bites for boating anglers. Foremost, the Plymouth pogy fest continues to produce bass of all sizes. South shore bluefishing stays alive through hot days. Momonoy holds slot stripers and brutish blues in the rips and Billingsgate Shoal has seen some quality bass. 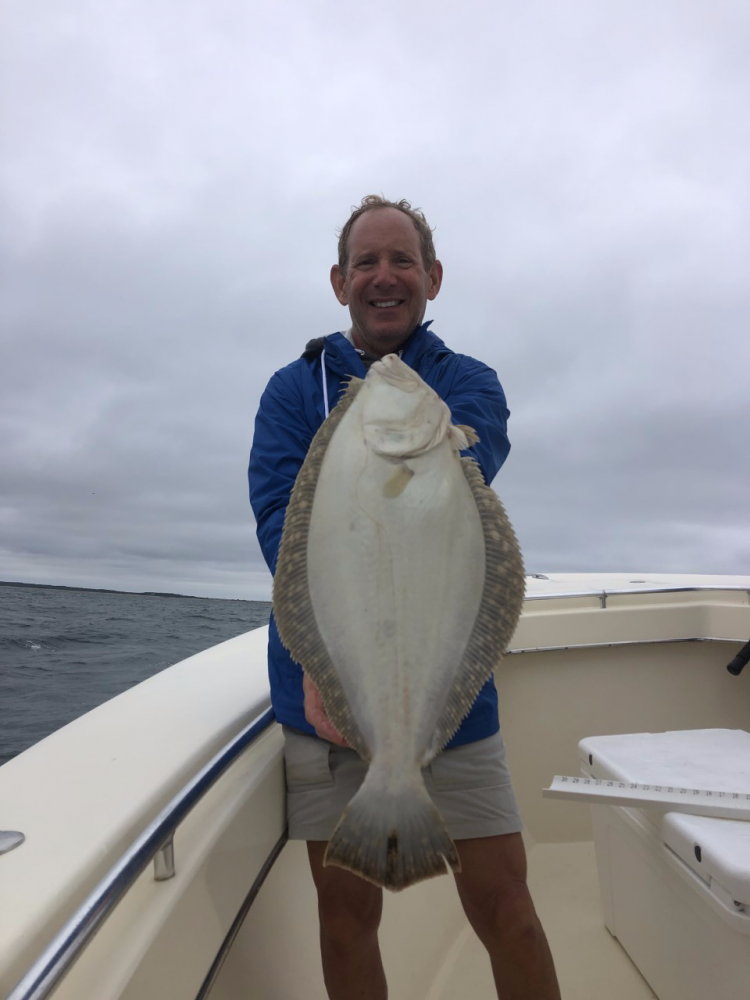 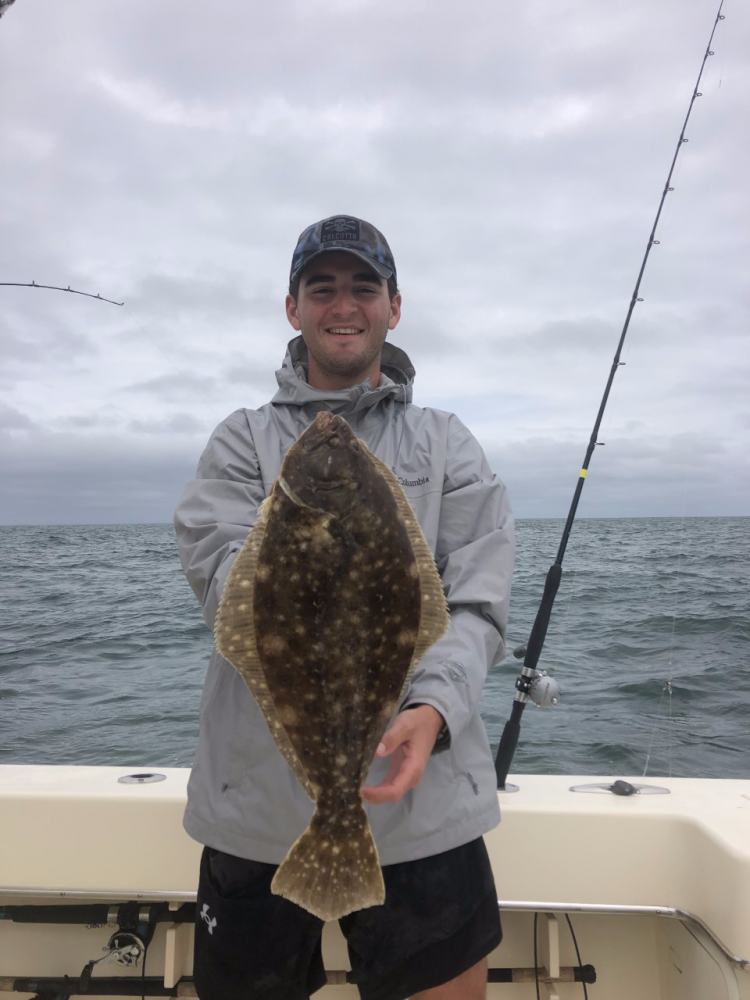 Above, father/son duo Joe and Troy Hurwitz battled cloudy conditions for some keeper fluke aboard Fishsticks Charters earlier this week.

“It’s been a crazy weather week, with a lot of wind, and three straight days of small craft advisory. But I did manage to get out a couple of times before and after the blow. I had a very successful trip with Enzley (age 6) and Luca (age 3), two precocious young anglers who caught quite a few fish and asked even more questions. We found some schoolie bass busting before we even left the Lagoon. I hooked one and Enzley reeled it in. That was going to be tough to top, but we headed out to search for some scup. We did find a few scup, including a couple that ended up as dinner, in Lambert’s Cove, along with a short fluke and a tiny sea bass. Finally, we headed to the Dip where we found another short fluke and a sea robin before we were compelled to check out the nearby flocks of diving terns. We topped off the day with another schoolie bass.
Wednesday, when the wind let up enough to allow me to get out, I had another great trip with dad Joe Hurwitz and sons Logan and Troy. We started out jigging for sea bass and caught a few small ones, but when the current proved too strong to hold bottom with our small jigs, we switched to traditional fluke rigs and drifted bait. This turned out to be a good choice, as we caught 7 keeper fluke up to 21-inches and a nice sea bass. There were lots of small sea bass mixed in, but strangely, no short fluke. All keepers!”

Captain Ross of Cape Cod Charter Guys reports another week of crushing them in Plymouth. Sticking to his guns has put big fish in the boat like the broomtailed beast pictured below. Although, he is wary that stormy nights and high winds may shuffle the large schools of bait and bass. He has also seen a productive striper bite on the Outer Cape not far from shore. 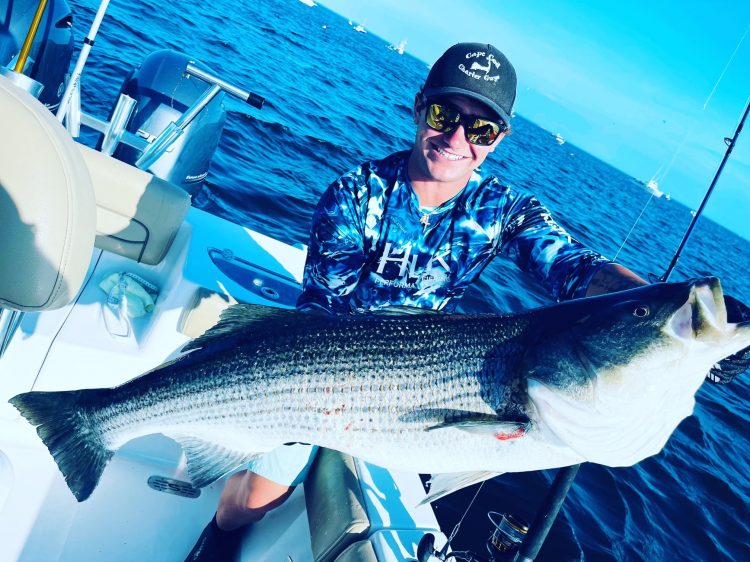 Captain Derek Simons of Seastriker Charters in Yarmouth has been frequenting the Nantucket Sound with great success. The squid-abundant grounds of the Sound have stirred up big bluefish which have been mutilating soft and hard plastic baits. In addition, sizable fluke have been liking the hi-lo rig fitted with cut squid bait.

“Was a great week for topwater on striped bass and blues even in the windier conditions. Although recent wind direction change cooled things down a bit yesterday, not just air temps but activity was a bit lower too. May put the fish into a different behavior pattern, but our Captains will figure it out!”

Gus Colangelo (above) and his family found the charter best-suited to their desired species and location using the link below.

Cooler and stormier days are ahead, which hopefully collaborate with the August 11th full moon to push some bait around and generate more productive fishing. Look for outgoing moon tides to push bait balls into the Canal’s west end, which has been home to school and slot bass the last few weeks. Monomoy still holds slot to over slot stripers amid big blues; a full moon could flush more bait into the area and stir up a frenzy. Buzzard’s Bay has seen schoolies and bluefish caught around points of structure. Not many fish are left to reside in its tepid water, but bait has been everywhere. With luck, albies and bonito will be next in line at the buffet. Fluke still line the sandy shoals and flats of the Cape and size seems to be increasing as the summer progresses. In the freshwater, largemouth bass will be taking cover from the heat in lily pads, grass, and downed trees. Fish finnesse or small-profile and they should be curious enough to strike.