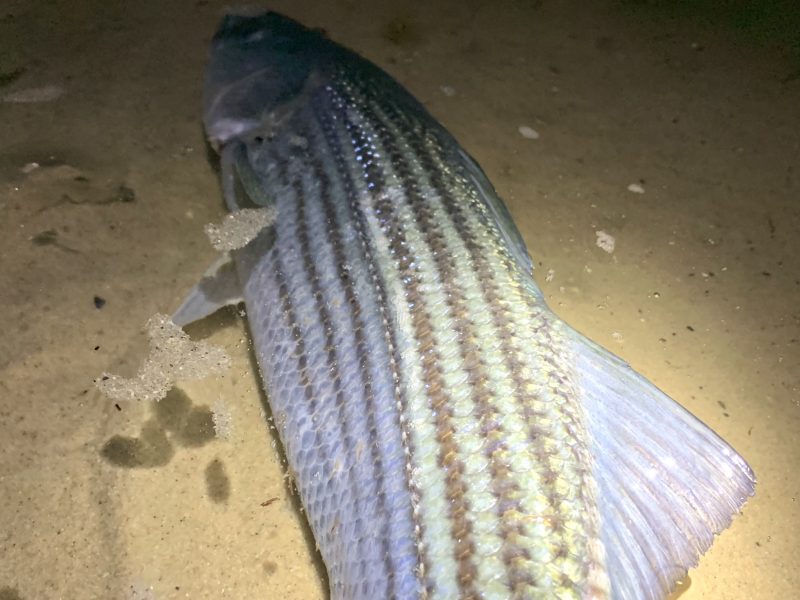 Summer is flying as we have passed the July 4th holiday and our fishing continues to get better as the yellowfin, bluefin, and wahoo bite picked up in the canyons. Most boaters have been running 60 to 85 miles to get into the action offshore. Tile fishing was also excellent along the canyon walls with good number of golden and blues coming over the rail. Inshore fishing remained about the same as the southern winds have brought in cooler bottom temperatures, but the flounder in the bays have responded to the influx of cooler water. Schoolie action along the back marshes and sedges has been pretty good with lots of short bass being landed.


Hook House Bait & Tackle in Toms River had lots to report starting with white perch in the Toms River over the past week. Small blood worms, clams, or fish bites have been working for the perch in the deeper holes. Crabs are very good along the sod or sedge banks with bunker baited traps and hand-lines. Anglers reported quality sheepshead off the north and south jetties of Barnegat Inlet. Surf fisherman working the suds off Island Beach State Park had decent numbers of keeper fluke on squid strips tipped on small bucktails.

Lacey Marine in Forked River had good reports of fluke around the inlet and from Little Egg inlet on live minnows and fresh spearing. The reef sites have been slow due to the colder bottom temperatures, but should rebound once the water warms. Offshore action has been solid on yellowfin tuna from the mid and southern canyons.

Jerzey Buoyz Sportfishing got back from the family vacation and ran a charter for sea bass in which the skipper said they boxed their 2-fish limit. They worked some areas inside, but could only find short fluke. They will be out by the end of the week for sea bass and inside fluke trips.

Creekside Outfitters in Waretown reported a tougher week with fluke action in the bays off due to the stronger tides. Anglers working the common areas reported some keepers to 24 inches, but more on the short side. Crabs have been very active coming off the New moon and crab hotels have been loaded when baited with bunker and proper permits. Offshore action on yellowfin has really kicked off for anglers fishing the southern canyons and the inshore areas are holding some bluefin.

Reel Reaction Sportfishing out of Waretown was out for a few days the past week and reported 23 keepers to 4 pounds for the charters. The skipper has been concentrating on bay flats action, but will be quickly switching over to ocean in the coming weeks. The crew has two boats and runs 7 days a week.

The Super Chic out of Barnegat Light has started targeting bottom-fish and flatties over the July 4th weekend. The skipper has been doing inshore tuna and bottom flounder on the weekends.  The boat has some dates remaining for the month of July.

Tony’s Bait & Tackle in Manahawkin said it has been a hot bite south with Little Egg and the backbay having a good number of keeper flounder. Gulp, minnows, and jigs tipped with spearing has been the best baits to use. Anglers looking to score some toothy critters off the beaches are finding brown and sand tigers at night. The bridges have had some small weakfish and schoolie striped bass for anglers throwing soft plastics in the dark.

Tackle Direct in Egg Harbor City reported excellent white perch fishing along and up the Mullica River. Shrimp and cut bloodworm have been producing for most boaters or kayakers. Fluke has been better near the inlets and at some of the reef sites, before this week’s strong southernly winds. Offshore action continues on yellowfin at the canyons on baits and jigs while the inshore fishery is a tad slower for bluefin tun

Tight Lines Bait & Tackle in Somers Point had a great report of some youngsters getting fish to 22 inches on Gulp. The backbay areas have been very good for fluke, especially in the deeper holes to 15 foot. Sea bass fishing has restarted and anglers reported easy two-fish limits off the deeper. Some big bluefin have been reported from 5 to 15 miles out. The crabbing in Ocean City has been exceptional and shop carries a full range of supplies.

Badfish Charters in Ocean City has been targeting fluke in the backwaters along with striped bass and sheepshead from structure. The crews have been taking multiple keeper fluke per trip. The skipper has some trips available for the rest of July.

The Cape May and Wildwood areas had reports of schoolie action along the bridges during the evening tides and even some keepers off the beaches in the early morning hours. A 27-pound striped bass was caught off the Delaware bay beaches this past week and the flounder bite has turned on. Reef site #11 has been very hot over the past week and anglers jigging bucktails tipped with Gulp are finding a good number of keepers. Offshore action has been very good on yellowfin at the canyons and boats deep dropping for tiles have been finding golden tilefish to 40 pounds and blue line tiles to 15 pounds.

The best bet for the weekend will be to do some type of fishing or crabbing as the weather looks great and both activities have been hot over the past week. Crabbing with bunker baited hand-lines or traps along most of the marshes that dot South Jersey will have hungry blue claws. Surf fisherman should have excellent shots at flounder during the early morning tides and better opportunities on the “toothy” ones at night. Chunked or whole bunker should do the trick. Boaters should be hitting the reef sites as the fluke bite has been slowly getting better and the recent easterly winds should increase the water temperatures. Offshore anglers probably have the best opportunity to put some “meat” on the deck with yellowfin and bluefin at the mid-shore to deeper canyons. Spreader bars and deep jigging has been the best technique for both species of tuna. Good Luck, Be Safe, and Tight Lines!