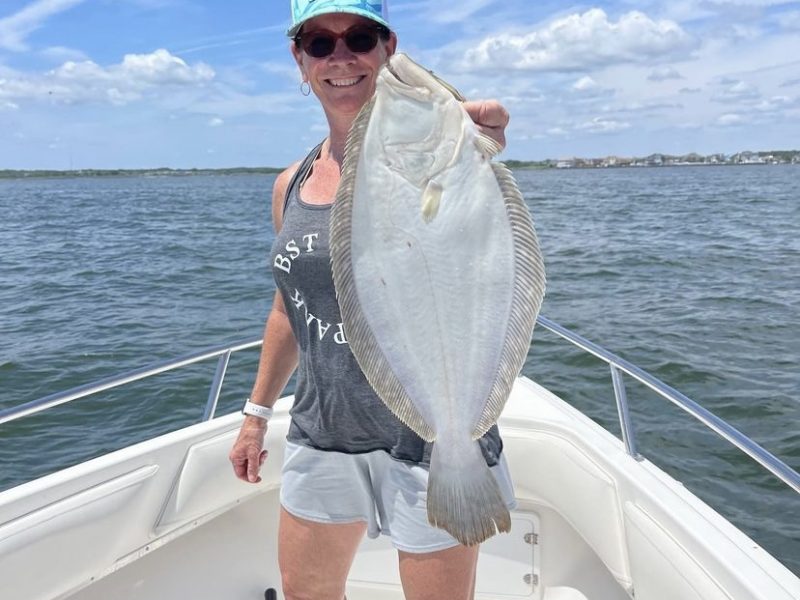 (Above) Creekside Outfitters shared this photo of Kerrie Gaboury with a nice back bay fluke earlier this week.

Our ocean fishing in South Jersey was just starting to gain some traction with the reef sites beginning to produce better numbers of fluke and sea bass. But, all it took was a few days of hard south wind and the water temperatures dipped back to the upper 50’s.  The positive is that our resident striped bass population kicks back into gear with some anglers getting decent sized keepers from the inlets on the incoming tides.  Flounder fishing in the backwaters has good numbers of fish, but you have to find the feeding temperatures they prefer.  The offshore scene had yellowfin, bluefin, and some wahoo at the southern canyons.  The inshore canyons have been showing both bluefin, yellowfin, and big bluefish.  With the full moon passing this week, the fishing should only get better next week on the quarter moon.

Hook House Bait & Tackle in Toms River reported some small bluefish around Barnegat and Manasquan inlets with most of the fish being 2 to 4 pounds.  Small metals and jigs are working well for these fish.  Fluke have been hitting off the beaches, but the south wind has played havoc as anglers are seeing 10-15 degree temperature swings.  Offshore action was hot earlier in the week on yellowfin 40 to 50 miles offshore in the vicinity of the Atlantic Princess.  The Barnegat inlet had some sheepshead being caught on sand crabs and fiddlers.

Lacey Marine in Forked River had some solid yellowfin reports of tuna just past the Atlantic Princess to the Chicken canyon.  Jigs and trolled spreader bars have been working with some consistency.  Later in the week, big bluefish covered up the area as the tuna bite slowed to a halt.

Jerzey Buoyz Sportfishing had a slower week as the skipper performed some routine maintenance on the vessel.  Fluke fishing has been slower in the bay and the ocean temperatures have not rebounded from the recent south winds.


Creekside Outfitters in Waretown reported good crabbing along the western parts of the bay with bunker in traps working the best.  Fluke fishing has been slower for most as dirty and cold water hampered most of the channels.  Anglers are finding fish with Gulp and jigs or jigs tipped with minnows.  The shop did report a few nice tuna being caught from the Resor, Atlantic Princess, and Bacardi areas.

Reel Reaction Sportfishing out of Waretown had a busy week working shallow cuts, deep channel edges, and tons of areas along Barnegat bay to put 45 keepers in the box.  The skipper has a few dates remaining for July and August as most days are double booked.  They will start targeting the ocean wrecks in the next week once the ocean water temperatures rebound.

The Super Chic out of Barnegat Light had anglers dropping baits on wrecks to catch ling, sea bass, and some flounder.  Offshore action had the skipper running to the midshore tuna grounds to find some yellowfin on jigs.

Tony’s Bait & Tackle in Manahawkin said good numbers of keeper flounder being caught ahead of the Morrison’s no wake zone.  Anglers drifting 6 to 8 foot stretches were finding quality fluke to 22 inches.  Offshore action has been hit or miss with some days of epic tuna action, especially from the Atlantic Princess to Chicken Canyon.  The reefs and wrecks have been hot and cold for fluke as the water temperatures have continued to fluctuate.  Crabbing and clamming continue to be excellent, but the shop reminds anglers to make sure they have a clamming license as Fish & Game has been patrolling Barnegat bay.

Tight Lines Bait & Tackle in Somers Point said it’s been a “sheepshead” week as fish from 9 to 12 pounds have been caught, released, and some weighed in.  Anglers are banging them on small jigs tipped with sand crab or fiddlers.  Flounder fishing was solid this past week for bay anglers working some of the deeper holes, but the recent full moon had the fish hesitant on the bite.  Offshore was good up north, but much better for anglers targeting the southern canyons as yellowfin and some mahi have been caught.

Badfish Charters in Ocean City worked some spot this week to put his clients on keeper flounder, schoolie striped bass, and even a few weakies came tight.  The skipper has been slammed with trips and will continue to work the bay and inlets for a variety of inshore gamefish.

The Cape May and Wildwood areas had a tougher week due to the upwelling caused by the strong southernly winds.  Inshore reef sites were slow, so anglers had to chase flounder in the back bay areas.  Reef site #11 and the local reef sites have also had decent sea bass action for anglers looking to box their 2-fish limits.  Sheepshead fishing has been red hot around most of the bridge pilings and jetties.  With the cooler water temperatures, striped bass re-ignited this past week and anglers caught a few fish in the keeper range.  Croaker, kingfish, and weakfish have been caught on bloodworms or clams.  Offshore vessels are still running 60 to 90 miles to find yellowfin, bluefin, and some wahoo action at the southernly canyons.

Want to get in on the bite? Find an OTW-approved Charter Fishing Captain in New Jersey!

The best bet for the weekend will depend on the weather as it looks like less south windage of the time of the report.  The wrecks and reef sites should be alive with fluke and sea bass and once the temperature stabilizes, it should be game on.  Anglers should look to hit lower profiled or rubble areas to put keeper fluke in the boat.  The next best option would be to rake some sandfleas or get some fiddlers as the sheepshead are on most of the pilings south of LBI.  1/4oz to 1/2oz jigs tipped with crab and worked slowly down along the vertical pilings should produce good sized sheepshead.  The same bridges offer excellent shots at striped bass and weakfish during the night tides.  4 to 5 inch Zoom, Fin-S, or Gulp baits pitched and worked near the light lines.  Most of the striped bass are under the 24 inch, but offer fun light tackle action for anglers.