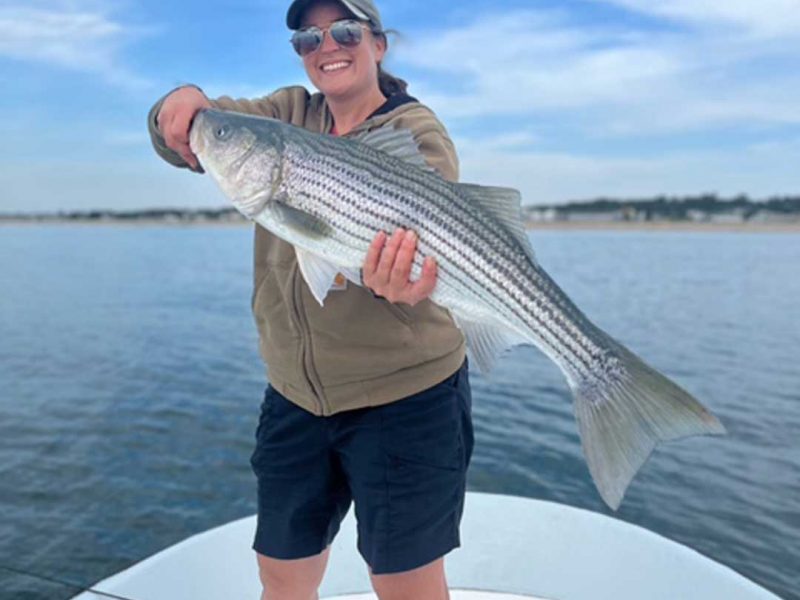 Something can be said for the “big bait, big fish” mantra! Such is the reality among the Piscataqua River watershed where pogy schools have attracted 40” plus stripers! Out deep, haddock and pollock are cooperating as is the occasional giant bluefin tuna!

Andy from Adventure and Catch Charters is usually full of interesting groundfishing antidotes but this week he added big stripers to his report! Hordes of pogies have invaded the Duck Island area and with them has come 40” to 50” striped bass! The process is simple: spot the pogies, snag em’ and hook em’ up to a circle hook and hold on! File this one away for September when recreational cod regulations loosen a bit – all kinds of cod are congregating near Wilkinson Ledge. For mackerel cruise out to the Isles of Shoals and once found you can use them for bait in the Fingers/Narrows section of Jeffrey’s Ledge for limits of haddock and big pollock! You’ll have to contend with the dogs, but the effort should be worth it! Boone Island also has plenty of mackerel. Cusk are full of eggs right now so the captain – always the conservationist – is making a point of releasing most especially the big breeders! He recently hooked up to a titan of a tuna, which he estimates at over 110”, which he fought for 5 1/2 hours only to chafe off in the end!

Captain Bob Weathersby fared better with a giant recently, in spite of the fact that he was a solo act, and bested a 412 pounder! While that was not in the class of Captain Andy’s beast, it was still an impressive feat nevertheless! As for mackerel, that prime bait for both stripers and bluefin are becoming more erratic. Isles of Shoals has become spotty, while inshore ledges are hot and cold and it really pays to chum. Regarding stripers the skiipper is finding that dropping temperatures from offshore winds put the bite down while onshore winds trigger feeding. Anglers are reporting no shortage of dogs on Jeffrey’s but the haddock fishing remains good! A tip for tuna guys who want to limit dog issues: place a few baits high in the water column, where those pests don’t roam but the tuna do!

A 9” Slug-Go is probably not the first lure you think of when it comes to brown trout but just such a lure was recently responsible for a big sea run brown trout according to Brandy from Webhannet Bait and Tackle/Boatyard. The awesome brown was caught off Ogunquit Beach. For big bass you can’t beat pogy schools and they have been found randomly from Perkins Cove to the Piscataqua River. Guide Larry Blanchett caught a fat, 46”, 42 pounder recently at night with a 12” soft plastic stick bait. Beaches are fishing best where there’s a smattering of rocks interspersed with the sand. Mackerel can be found by the deeper water off Boone Island with anglers putting that bait to good use near the Little River early in the day. The mouth of Kennebunk River as well as Wells Harbor have been productive for the tube-and-worm set.

According to Captain Lou Tirado of Diamond Pass Outfitters, the crux of river herring have fallen back into the sea by now making the rivers exclusively a low light game. The fish “out front” are focusing in on 2-3” baitfish but the fish are on the move. The bite has been shifting between Yarmouth, Saco and Cape Elizabeth! Soft plastics have been doing it for the skipper with Albie Snax and Zoom Flukes among the favorites. During the daylight, the fish are inactive making live or chunk mackerel your best option. There have been rumblings of bluefish in the York area!

Snag a pogy and liveline it by the Duck Island area for one of the cows that shadow the schools. Ogunquit in Maine is living up to it’s unique reputation as a producer of big sea run brown trout. Beaches with rocky structure have been giving up big bass in Southern Maine at night for anglers working big soft plastic stick baits. Groundfishing remains good with giant tuna in the offing among offshore ledges also!