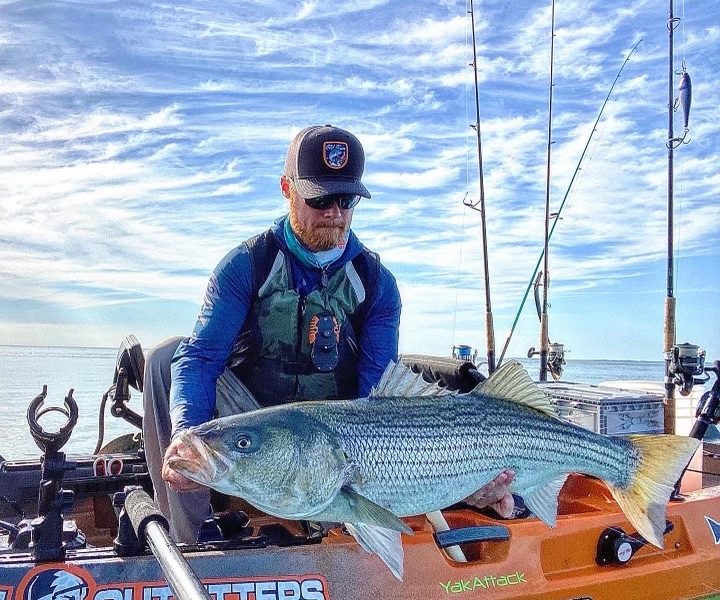 (Above) Matt Stone of Black Hall Outfitters prepares to release one of many large stripers he’s landed recently. (@sunrisekayakfishing)

Matt, at Black Hall Outfitters in Westbrook told me that we have hit a bit of a transition period, with water temperatures rising and some of the larger striped bass starting to move out of the river and set up on out front structure. There are still some bass to be had in the river, especially if you can locate the bunker schools which have thinned out, but drifting eels on the inshore reefs are starting to produce better. GT eels fished on a light jighead has also been a strong producer during the dawn/dusk hours. There doesn’t seem to be a big difference between the incoming or the outgoing tide, if you find some moving water, you should be able to find some bass.


Heather from Black Hawk Sportfishing reported another busy week aboard the Black Hawk! Their day trips all saw excellent porgy fishing, with good sized porgies filling the coolers. The fluke trips have been a bit slower in terms of the target species, but they have found plenty of nice sea bass in the mix. The After Work special trips continue to be very strong, with huge bluefish and plenty of stripers in the mix. These trips have been so strong lately, that they plan on adding some more to the schedule. The Black Hawk will continue to run family trips that are on the shorter side and geared toward younger anglers, but they are filling up quick, so book asap! They will continue to run two trips on Saturday’s and Sunday’s and will keep fishing every weekday. Be sure to check their website for the exact schedule and to book a spot!

Joe, at Diorio Guide Service told me that the fishing remained outstanding this past week, with a great combination of numbers and size on the striped bass grounds. Joe managed multiple fish in the 30-40-pound range, with a few pushing the 50-pound mark. Finding fresh bunker has been key, as most fish have come on fresh livelined offerings. The topwater bite has been up and down, due to some heavy current and heavy boat traffic, but you can still find some nice fish on Docs, Dannys, and soft plastics on the right days. The river has been as steady as ever, but the bass are also starting to transition to the reefs, which provides a nice option if you’re trying to avoid some of the boat traffic.

Mike Roy at Reel Cast Charters had another strong week of local fishing. He’s seeing new schools of migratory fish on each trip, and the bite has been strong from inside the river, and outside the river on all the reefs and rips from Clinton to Rhode Island. There are more bluefish around this year than mike can remember, so there is certainly no shortage of action on any give trip. Give Mike a call ASAP to book a trip while he still has some openings!

Captain Andy, of Carolyn Ann Sportfishing was happy to report that he is finding some of the strongest striped bass fishing that he has seen in years, in and around The Race. The gator bluefish numbers are also very strong, so most trips are seeing a nice mix of big bass and big blues. The sea bass bite is slowly improving to the east and is excellent around Middle Grounds. The scup fishing has also shown a marked improvement over the past few days, with the increasing water temperatures.

Max, at Fisherman’s World in Norwalk, reports that the red-hot bass fishing is hanging on and hasn’t really slowed down at all. With the temperatures increasing, the better fishing has come after dark on fresh chunks, at least in terms of size. That being said, you can still find some quality fish around the islands, as well as around Fairfield during the morning hours on livelined or chunked bunker. Another big slug of bluefish has entered the area once again, so there is no shortage of action. The bluefish tend to be hanging around deeper structure during the day and feeding in the shallows after dark. The fluke fishing has been a grind outside of a few decent fish caught in 40-60 feet of water, but the scup and sea bass action has picked up the slack. The scup bite has hit full summer mode, with great catches from both shore and boat anglers.

The strong season of striped bass continues, with no shortage of big bass across the area. Rhode Island anglers have no shortage of big bass, with the usual summer Block Island bite reportedly being stronger than ever. If you don’t want to travel too far, you shouldn’t have an issue finding some solid bass in the bay or along the South County beaches. If you’re heading to Block Island, bring your fluking gear, as the island has now become the safest bet to find a cooler full of doormats. Encouraging fluke reports have finally started to come in from the South County beaches, and we should see an increase in action in those areas as the water continues to warm. The sea bassing has found some consistency in the usual Rhode Island hotspots, along with the scup bite, which is starting to hit its summer stride.

Connecticut waters also have no shortage of big striped bass, with great reports coming from literally the western border of the state to the eastern border of the state. The lower Connecticut River and its adjacent reefs are as safe a bet as any, but excellent reports are also coming from the Norwalk area, Milford area, and The Race. Fluking has been a bit tougher in CT, but anglers that put some time in are finding some keepers on deep structure, and there is no shortage of sea bass and scup to help fill the coolers. Connecticut’s summer tautog season has kicked off and has been fruitful for those that are actually targeting them.

Offshore reports are full of solid shark reports, along with most reporting that the signs of tuna are out there, so it should only be a matter of time before the bluefin reports start to roll in.