Every year, Fourth of July brings around one million tourists to the Cape and Islands to enjoy sun and sand while celebrating the good ol’ US of A. While beaches and businesses might enjoy the influx of crowds, most locals don’t. A patented way to celebrate away from the crowds is to wet a line at your favorite fishing spot. Fortunately, many of us at OTW spent the holiday weekend chasing stripers before saluting the stars and stripes. My father and I were lucky enough to spend our Fourth on the water with Captain Ian of Reel Deal Charters. Bluebird skies and a lack of wind made stripers finicky, but we left with the memories of acrobatic bluefish fights and a few quality bass.

On the day’s first drift, we threw out a chunked mackerel and began to find our jigging rhythm. The fishfinder was lit up with red as massive schools kicked their broomtails just below our hull, though the bass proved stubborn with the day’s overhead sun. Ready to pick up and change locales, Ian asked that I reel up the chunk bait. After a few revolutions of the handle, I felt that familiar “tap-tap” and a sharp jerk of my rod tip was echoed by a screaming drag. After a worthy battle, this stocky linesider (below) was revealed. 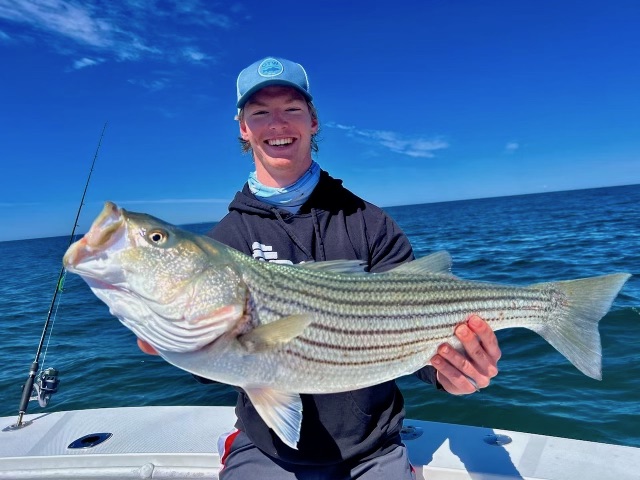 However, I was not the only OTW intern to shake fins with a quality bass this weekend. Matt Foley (below) hauled in this certified Cape Cod cow on the fly after 15 minutes of white-knuckled fighting. 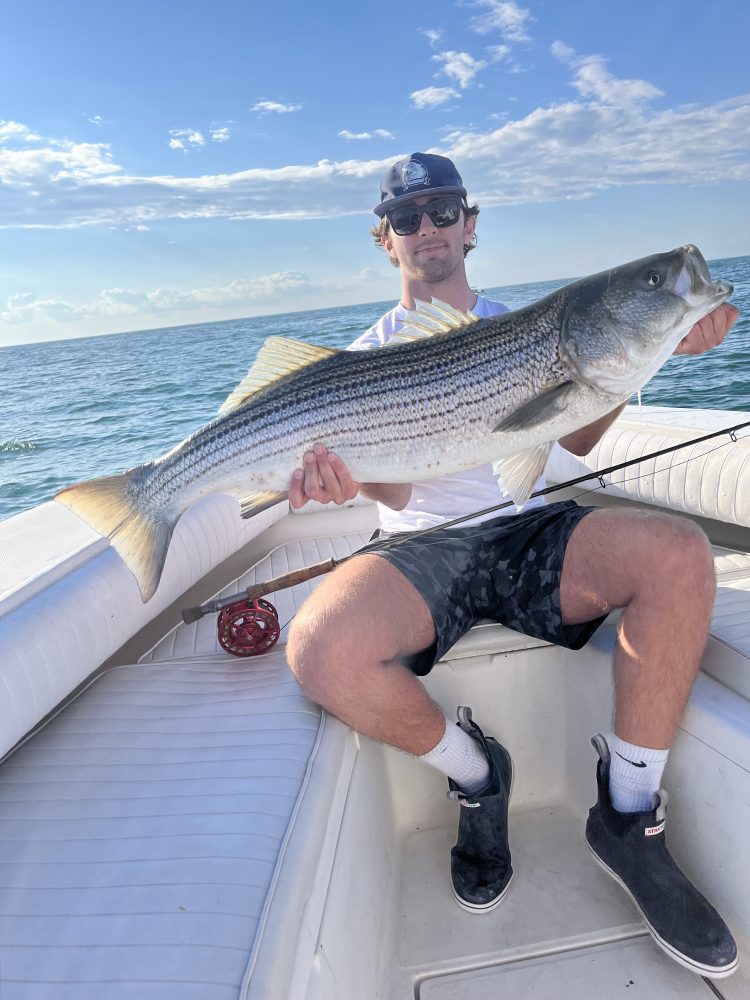 Canal Bait and Tackle reports that nighttime on the ditch has been the most productive. The fish you still find in the Canal will be down deep avoiding the blazing July sun. Therefore, heavy jigs and chunk or live baits have been the ticket. Many of the bigger slot fish have been caught on live eels under the moonlight.

Macos Bait and Tackle on Buzzard’s Bay reiterates the recommendation of live bait in the canal. Live and frozen chunked mackerel have been selling fast and producing by far the most fish of any method. Pogies are still the bait du jour in Buzzard’s Bay and Cape Cod Bay, stripers and teen bluefish are likely not far behind. For bottom fishermen, keepers have been hard to come by this summer. Reports of keeper fluke off Cleveland’s ledge should assuage your woes.


Red Top Sporting Goods has been finding their bottom fish on Nantucket Shoal. The stripers in the Canal have slowed down for them as well but remain somewhat consistent on live baits and chunks. For boating anglers, The Cape Cod Bay off Plymouth and Duxbury continues to be swarmed by pogies and therefore keeper stripers. School-sized Tuna and some footballs have been caught off Stellwagen bank and a few miles off Race Point. With these trophy fish entering our waters it’s a great time to contact your local charter captain or make the run yourself!

Reel Deal Charters of Truro has been experiencing quality bluefin fishing at first light off Race Point. They found the striped bass have moved to deeper waters and have been cruising on the bottom, leaving June topwater blitzes in the rearview mirror. Diamond jigs and chunks have been steadily producing for them.

Morgan of Sports Port Bait and Tackle reports that the Monomoy rips have been creating some entertaining fishing recently. Among the cast of characters are schoolie stripers, slot stripers, black sea bass, and large bluefish. White soft plastics have been grabbing their attention. On the south shore, blues have been hitting on topwater when the sun is low. For those chasing doormat fluke, check out Nantucket Sound, whose shoals have been popular with the flat fish recently. Brown Sharks have officially entered the south shore area as well. Morgan reports a few being pulled out of the dogfish heaps off Centerville.

Capt. Kurt Freund of Fishsticks Charters on Martha’s Vineyard reports: “This week’s charters continued to catch both striped bass and bluefish, but the bass are getting harder to find. We’ve also done well on black sea bass, though there are many smaller fish to work through to find the keepers. There have even been a few keeper fluke in the mix.”

Cape Cod Charter Guys’ Captain Ross has been finding a consistent striper bite in the Cape Cod Bay. He has been surprised by the amount of gator blues mixed in with these schools. He even saw the odd bluefin chasing bait alongside bass and blues this weekend.

Want to get in on the bite? Find an OTW-approved Charter Fishing Captain around Cape Cod and the Islands

This week should see temperatures a slight bit cooler, hopefully this will excite some sizeable fish into shallower waters. For now, the big bass are lazily coasting the deep so fish low and slow. More attractive live and chunk baits have been enticing the more selective fish, but jigs and soft plastics with heavy weights should do the trick as well. If you’re looking in Buzzard’s Bay and the Canal, eels at night and mackerel in the light seem to be the current fare. Tuna is hot off the outer Cape and Stellwagen bank. These schoolie tuna can be an awesome battle on light tackle, so maybe don’t dust off the big trolling rigs just yet. Elevated sand flats all over the lower cape have seen keeper fluke landed this week. Explore Cleveland’s ledge or make the trip out to the Nantucket Sound to try and hook a new doormat. As always, don’t forget about the freshwater! When the surf or estuaries aren’t producing, I sleep well knowing that the Cape’s underrated largemouth fisheries are close by.