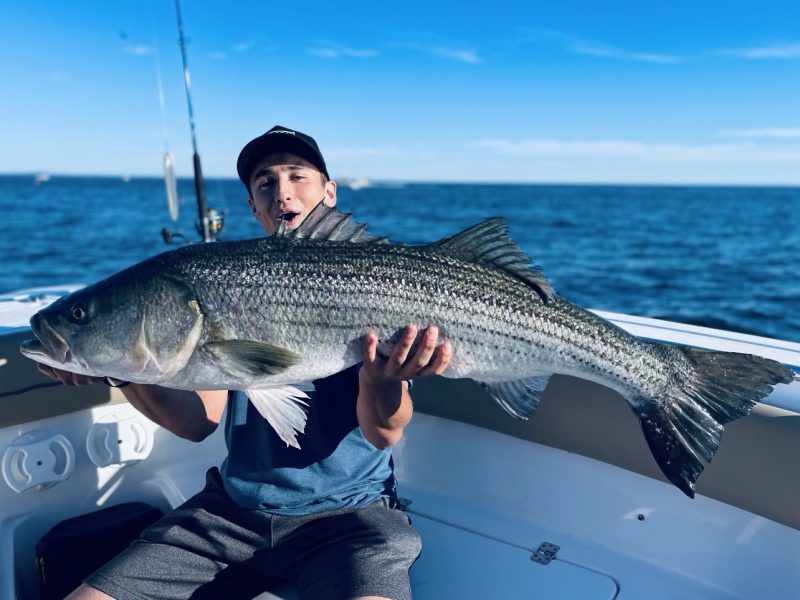 A relentless heat wave has shuffled fish behavior and location this week. One aspect that makes Cape Cod a world-class saltwater fishery is its cold water, especially close to sandy beaches and estuaries. After a week-long heat wave, some reliable spots can be cleared out, devoid of bait and their accompanying predators. These fish are likely retreating to deeper and cooler waters following their favorite meals like nomad hunters on a buffalo herd. Keep an eye on your electronics when checking up on your secret spots. Sonar and water temperature readings may look very different than they did during your last bass-busting outing. If fish are still around, they will likely be glued to the bottom’s structure and eating like a grade-schooler; inconveniently picky with blips of reckless abandon.


If you are fortunate enough to hook into some deep-water crawlers, it is important to understand how warming water alters a fish’s biology. Warm water is inherently more laborious to obtain oxygen from during respiration. As water temperatures increase, so does the metabolic rate of the fish that inhabit it. On average, for every 18-degree increase in water temperature, a fish must double its respiration rate. This excess energy expenditure is a double-edged sword for fishermen. When fish are forced to raise their metabolic rate, they require more calories to sustain themselves. This can oblige big fish to eat big meals, which contribute more calories with less energy expended during hunting. On the other hand, fish will become more sluggish and will be more selective when choosing their prey. If you can yank a bruiser from its summer lawn chair, remember that this fish is starved for oxygen after battling your drag. Take extra care to revive the fish as mortality rates exponentiate when respiratory demands are elevated. This is also a reminder to keep fish wet the remainder of this summer. Photo shoots with your personal best striper are certainly necessary to preserve the moment, but not at the cost of the fish’s life.

Canal Report via East End Eddy Doherty: “Bluefish invaded the Canal and were being caught everywhere for a couple of days from the railroad bridge to the herring run and all the way to the east end. I was bouncing a white Bill Hurley Canal Killer off the bottom on an early dropping west tide in the Combat Zone when a bluefish attacked my soft plastic jig with the enormous vigor and strength that is characteristic of the yellow eyed devils…

Some slot sized striped bass and larger are being caught periodically by soaking pogies and other old school enticements as some anglers are having more success chunking than throwing lures so sharpen your bait knife. Bob Weir of Taylor Point, however, fooled a 33 pound striped bass on a west bound ebb with a pink Al Gags soft plastic 5 ounce jig so he’ll be sticking with lures! Squid imitations are working as Ryan Smith of Bourne reeled in a striper that looked to be just above slot that fell for a pink Savage at the end of the east tide…”

Canal Bait and Tackle of Sagamore reports an uptick in Canal activity this week. Big blues have been charging mackerel schools on the east end. Some stripers have reentered the ditch’s feeding frenzy and have been caught on chunk baits, live baits, and anything fished proximal to the rocky bottom.

Maco’s Bait and Tackle in Buzzards Bay has heard through the grapevine of big seabass schools off Noman’s. They echoed the call to the Canal and harped that the Plymouth area still holds great volumes of bait, bass, and blues. Warming waters is not always reason for gloom when on the Cape. This temperature change has brought smaller baitfish such as glass minnows to Buzzard’s Bay. They have been getting devoured by birds and even a few schoolies near the Marititme Academy. Fluke are not opposed to warming waters and 20-inchers have been caught with some consistency on the Mashnee Flats.

Red Top Sporting Goods reports solid fishing off Plymouth in Cape Cod Bay but cites that bait and bass will likely shift northward towards Boston if weather stays tropical. Through the heat wave they have been getting out to the kettle ponds and landing largies.

Sports Port Bait and Tackle in Hyannis reports productive Mid-Cape surfcasting at the intersection of high tide and low sun. Blues and schoolies have been chewing close to shore under the right conditions. The Monomoy rips remain the steadiest fishing in their area, however.

Cape Cod Charter Guys’ Capt. Ross cited a legendary day tuna fishing after a lengthy, risky run. Nine quality bluefin landed on spinning gear and Strategic Angler plugs was enough to blow the minds of both the clients and the captain.

Also, Capt. Ross said the pogy schools off Plymouth are holding mondo bass, much like the one shown in this week’s cover photo (above).

“It’s been a week of fishing artificials off the tip of Provincetown for striped bass and occasionally some really good bluefish action too. Have not been using live mackerel the past few days as the Daddy Mac RD Bomb is getting it done in the early morning hours and then the later morning and afternoon trips switch over to jigging when the fish are no longer on the surface. Interesting dynamic this year as the decrease in mackerel likely causing the increase in sand eels looks to be holding the fish in the Provincetown area.”

We’ve had more than just unusually hot days this week. A couple of days were so windy that there were small craft advisories posted. On Thursday, the advisory was scheduled to go into effect at 11 a.m., so father and son Jamie and Aidan Masterson and I decided to sneak a trip in before the weather got too bad. Now, my first responsibility is my guests’ safety, so I wouldn’t have gone if I thought it was unsafe, but I have to admit it wasn’t the nicest day. Nevertheless, we had a great trip, jigging and trolling black sea bass, despite the less than ideal conditions. Sometimes, it’s overcoming the obstacles that makes it fun and rewarding.
On a much nicer day though, Jean, Cullen, Mandy and Jeff Dallenbach had a productive trip targeting fluke and black sea bass and even landed a bonus bluefish. Shawn Byrne and family also caught a couple of big bluefish and a bunch of black sea bass to 20 inches.

Next week will bring steadier weather and hopefully steadier fishing. Big bass and blues are still chewing on pogies off Plymouth although they may soon depart in search of cooler waters. The Canal had a remarkably productive week, hopefully the bite will stick around and bless the Cape’s surfcasting faithful. Getting baits deep in the channel and matching the mackerel and pogies will be your best bet for ditch-roaming bass. Race Point has been a consistent striper bite as it holds the Outer Cape’s coolest waters. Many miles from Race Point light, the Tuna have been eating aggressively. Stellwagen Bank seems to be in a bit of a slump but the Tuna grounds off the Race have stayed alive. Buzzard’s Bay and the southside beaches have seen a jolt of life sparked by an influx of smaller baitfish which are attracting schoolies and bluefish. Shore-bound and kayak-topping anglers are encouraged to investigate their local kettle pond, where largemouth are thriving in the dog days of summer.